Budding squash players around the world will soon be able to take advantage of recycled equipment following the move byLV=SOS Kit Aid into the sport to further boost junior development.

More than 130,000 youngsters have benefited from the $5.25 million worth of recycled sports kit that LV=SOS Kit Aid have already donated internationally. Now young squash players are set to benefit as deliveries of rackets, clothing and shoes will begin shortly.

“I was able to really get inside the game while seeing some really high quality squash at first hand too! I had no idea that squash was played in 185 countries,” said Broadfoot.

“In LV=SOS Kit Aid we are really looking forward to working with the WSF – collecting and recycling squash kit and sending it around the world to really promote the game in less developed and new countries and help the WSF too.”

This support, in partnership with Lord’s Taverners, follows on from and expands the WSF Rackets to Africa programme that has already seen several hundred squash rackets shipped to a number of African countries.

World Squash Federation Vice President Hugo Hannes was delighted to welcome the Kit Aid initiative, telling Broadfoot: “Development is a priority for us, and to be able to offer such strong support to communities that have courts and youngsters who could use them, given the equipment and clothing, will bring long-term benefits.

“This channel will hopefully grow into a large, regular and valuable flow.” 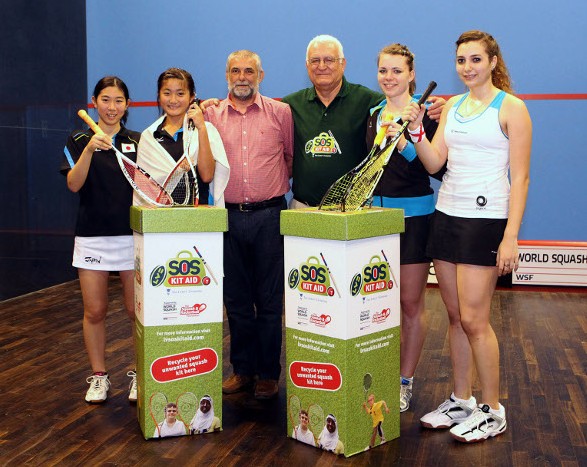 Broadfoot (centre, right) and Hannes pictured with the members of the Japanese and English squads at the World Junior Championships