The pair had met four times previously, with Englishman Selby losing the first three but winning their most recent encounter last month at the Swedish Open.

It was also a repeat of the 2010 final in which Lincou, then ranked higher than Selby, edged to a four-game victory. 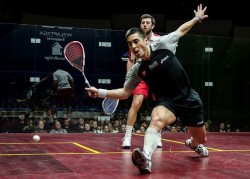 Both players had reached the climax after notable upsets, world No12 Lincou over Egyptian favourite Amr Shabana, the world No6, and Selby over second-seeded Dutchman Laurens Jan Anjema, ranked nine in the world.

It was the biggest Tour final of Selby’s career – and the 29-year-old world No11 from Essex came back from behind in the first game to take an early lead.

But, to the sheer delight of the packed crowd, the match ebbed to and fro – with Lincou drawing level after the second and the next two games shared, leading the contest into a fifth game decider.

“Down 7-2, the crowd began egging Daryl on, but it was becoming clear that Lincou’s earlier attacking work was having its desired effect in slowing Selby down,” explained tournament spokesman Jeff Cullis. “But Selby would never stop trying, making four or five back-wall returns as Lincou pinned him in the back court before taking the point on an unreasonably short backhand drop.

“Selby then hit a beautiful backhand drop from the back court into the straight nick to make it 8-4. From here it was all Lincou, however, as Selby found tin twice on tired shots to end the game 11-4 after 92 minutes. The crowd were again on their feet, showing their thanks for a spectacular final match.”

Selby was quick to sum up the match on Twitter: “Well I take my hat off to the legend Thierry Lincou. He played perfect squash in the fourth and fifth when I thought he was dead on his feet.

“And the crowd were just immense tonight! Unbelievable atmosphere and the people in Halifax are just amazing. What a tournament!”

Lincou, whose remarkable PSA Tour record now reads ’44 final appearances and 23 titles’, was delighted to have successfully defended his 2010 title after being forced to miss last year’s event through injury. 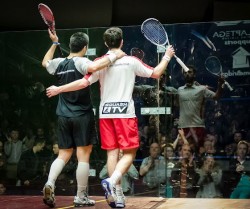 “I am delighted with my performance this week – I had some meaningful wins and I felt really sharp,” said the former world number one and world champion, who arrived in Halifax after reaching last week’s final of the Open de Squash Banque Nationale Groupe Financier in Montreal.

“I think that my form was due for some part to the four big matches in Montreal in hard conditions (bouncy panel courts). It really strengthened my fitness and my mental focus.

“After a poor beginning of the year, I really found my way back, my determination, my fitness and the desire of winning. This was a sweet victory two years after my last one – which was also in Halifax!!