Unseeded Pakistani Aamir Atlas Khan continued his giant-killing run in today’s semi-finals of the CIMB Malaysian Openin Kuala Lumpur to set up a meeting with French favourite Gregory Gaultier in the final of the PSA World Tour International 50 squash event at the Curve Shopping Mall.

In his most impressive Tour run for almost two years, Khan upset home favourite Mohd Azlan Iskandar, the title-holder and third seed, in the quarter-finals before facing higher-ranked Australian Cameron Pilley in the semis.

Meanwhile Gaultier, the world No6 in his maiden appearance in the event, chalked up his third straight straight games win in the tournament when he beat qualifier Alan Clyne.

The Scot had enjoyed one his most impressive recent Tour runs – making his breakthrough in the opening round by ousting fourth seed Hisham Mohd Ashour before overcoming a further Egyptian Karim Abdel Gawad.

Gaultier enters the final as firm favourite for the title – but whilst his career head-to-head Tour record against Atlas Khan is one win apiece, it was the Pakistani underdog, ranked 28 in the world, who emerged triumphant in their last meeting, in the second round of the Qatar Classic in November 2009.

In a day of shocks in the CIMB Malaysian Open in Kuala Lumpur, defending men’s  champion Mohd Azlan Iskandar crashed out in the quarter-finals to extinguish Malaysian interest in the last four of the PSA World Tour International 50 squash event at the Curve Shopping Mall.

In one of his best victories in recent months, Pakistan’s unseeded Aamir Atlas Khan toppled the third-seeded Malaysian 11-5, 10-12, 11-9, 11-6 in 56 minutes. It is only the second time in eight years that three-time champion Iskandar has failed to reach the semi-finals.

Khan, the 20-year-old world No28 from Peshawar, now faces fellow non-seed Cameron Pilley after the world No17 from Australia produced the event’s biggest shock yet by beating Egypt’s No2 seed Mohamed El Shorbagy, ranked nine in the world, 11-6, 11-6, 14-12.

The 24-year-old from Edinburgh – at 49, the lowest-ranked player to qualify – will now face top-seeded Frenchman Gregory Gaultier for a place in the final.

Gaultier, the world No6 in his maiden appearance in the event, denied three-time champion Ong Beng Hee his fourth appearance in the semi-finals since 2000 by beating the former Malaysian number one 12-10, 11-2, 11-7. 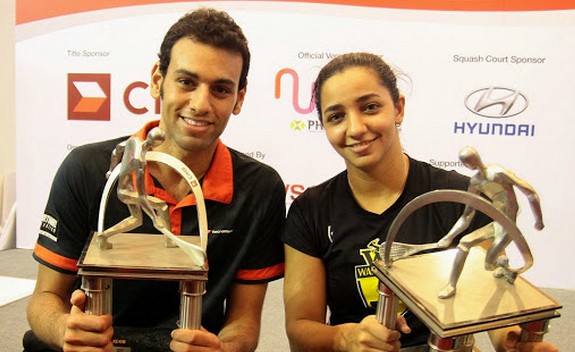