Less than 24 hours after the drama of the Singles medals finals day, Commonwealth Games Squash action switched to Doubles as players took to the wider courts in bids for glory in the Men’s, Women’s and Mixed events at Oxenford Studios in Gold Coast, Australia.

There was a significant Pool upset early in the day in the women’s event when Rachel Arnold & Sivasangari Subramaniam, the ninth seeds from Malaysia, brushed aside top seeds Joelle King & Amanda Landers-Murphy, the reigning world champions from New Zealand.

The match took place some 16 hours after King celebrated becoming the first Kiwi to win a singles gold medal – after surviving a dramatic and energy-sapping 78-minute final.

But Arnold & Subramaniam  clearly made no allowances for this, storming to a shock 11-10, 11-10 best-of-three victory (the standard doubles scoring) over the favourites. 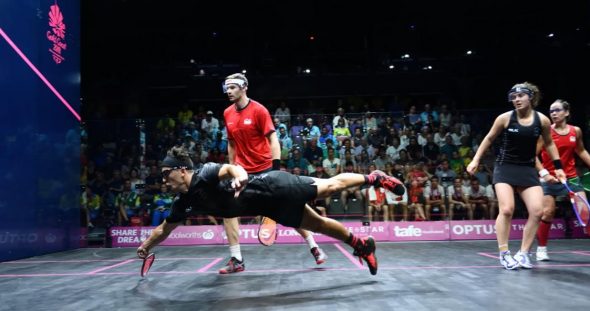