Top seeds Samuel Kang and Au Yeong Wai Yhann continued their dominance on the domestic circuit as they saw off spirited opponents at the Kallang Squash Centre to each claim their fourth MARIGOLD Singapore National Championship in a row.

Kang has dominated the local scene for some time and continued his supremacy after a nail-biting final against 21-year-old Aaron Liang, in a win he described as his most important to date.

The 30-year-old took the first game 11-6, only for Liang to hit back and take the second 12-10. The third game was another tight affair, with Kang eventually eking out an 11-9 win, before sealing the title in 67 minutes with an 11-4 win in the fourth.

Speaking after the match, Kang said: “Today was very special. Compared to the previous ones, this one means the most to me. For the past two months, I wasn’t able to train much and I had an injury. Two weeks before this I wasn’t able to run without pain. I was feeling a bit demotivated, lost the fire a little bit. I think the pandemic has affected all of us. We all go through these cycles where your motivation drops.

“When I saw people playing, I felt like I still wanted to do that and I still have the ability to do that, so why waste it? Personally, I don’t have anything to prove. I just want to play for as long as I’m happy and this tournament has definitely got me onto court and feeling happy.”

When asked about his plans for next year, Kang said he looks forward to getting back into training more regularly and – providing restrictions allow – was excited for the Asian Games 2022 in Hangzhou, China.

Liang, meanwhile, will hold his head up high despite the loss in his first ever National’s final appearance. Having come through a mammoth five game battle against second seed Marcus Phua the previous evening, he gave Kang one of his toughest matches on the local scene in recent years, despite playing with an injury for much of the final.

“I’m pretty satisfied with reaching the finals. I lost [to Phua] 3-0 in the semis last year, he beat me flat, so it was really good to get my revenge. Coming into this final, I was very exhausted. Going into the first game, I was getting tortured!” he said.

Despite being just 22 years old, Au Yeong is already seen as the dominant force in Singapore squash. With four national titles to her name, and a long career predicted, she is tipped to reel in Singapore legend Joannah Yue’s record of ten national titles.

Having only arrived from Bristol – where she had been training with Mohamed ElShorbagy and Joelle King – two days prior to the tournament commencing, there were concerns that Au Yeong would struggle with fatigue. However, she was her dominant best throughout and took the title without dropping a single game, beating 15-year-old Gracia Chua in 20 minutes with an 11-6, 11-2, 11-4 win.

“I’ve seen a lot of progress in my game although I have been away for just a few months. I’ve been working a lot on my movement and just my game composure and it’s really showing now,” Au Yeong said afterwards.

She added: “It’s always nice to play this tournament and seeing all the juniors and seeing how much they’re improving, I think we have a very strong group of girls and it’s really promising.” 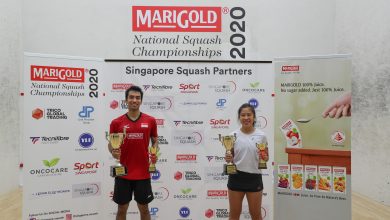 Singapore National Squash Championship 2021: Preview and How to Watch