The world’s top two squash players Nick Matthew and Ramy Ashour will contest a dream final of the ROWE British Grand Prix in Manchester after identically-timed semi-final victories in the PSA World Series squash event in its second year at the National Squash Centre. 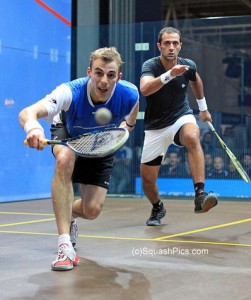 In a career rivalry stretching back more than ten years, England’s world number one Matthew beat Amr Shabana 11-8, 11-4, 6-11, 11-3 in 54 minutes to claim his tenth PSA World Tour victory over the four-time world champion from Egypt.

Shabana, competing in his first Tour event for six months, twice led in the opening game – but Yorkshireman Matthew bounced back to take the game and lead throughout the second.

The 32-year-old left-hander from Cairo picked up his game in the third and was ahead throughout before reducing the deficit.

But after a tight start in the fourth, Matthew rattled off eight points in a row from three-all to clinch victory.

“Every rally was so evenly-contested – you can never relax for one minute against Shabs,” the 31-year-old from Sheffield said afterwards.

In describing the third game, Matthew said: “He came out and upped the pace – which was fast enough already! We got into too many exchanges at the front of the court.

“I got a bit lucky with a few errors in the fourth – and went from three-all to 8-3 without realising it. It took me by surprise as I was just concentrating on my shots,” added Matthew, now in the 44th Tour final of his career.

“My coach DP (David Pearson) was a great help in my corner. I tend to get a bit excitable in games, and he helps calm me down – and that’s what he did before the fourth.” 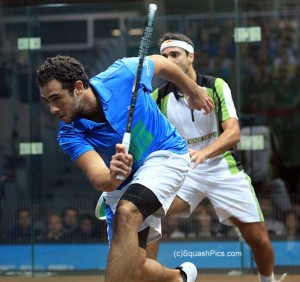 The charismatic 23-year-old from Cairo came back from losing the second game to turn on his dazzling style – winning 11 points in a row to take the game from 2-0 down.

“I think I was really focussed – but you have to be against Karim,” said Ashour, now in his 35th Tour final. “He gets very confident very fast. He hits a lot of winners, especially on his forehand.

“But the more I play him, the more I learn. There’s a great rivalry between us.”

In trying to explain the loss of the second game, Ashour said: “Sometimes the demons can play in your head – and you have a bad patch. But that’s what the game’s all about – you have to keep scrappy thoughts out of you head, it’s so easy to lose focus.”

Remarkably, Ashour has never lost a match on the ASB all-glass showcourt in Manchester: “This court has never let me down – so I hope it won’t tomorrow!”

Third seed Darwish was disappointed with his game: “I was not sharp today. I tried to slow down the pace.

“But he attacks every shot, he’s a really tough opponent,” said the former world number one, also from Cairo. “All credit to him.”

Matthew and Ashour will be meeting for the fifth time this year – and the fourth time in PSA World Series event final.

“Ramy’s got the better of me the last two times we played – but I’m more confident in my game this week than in the whole season, so I hope that translates into a good performance tomorrow,” concluded England hope Matthew. 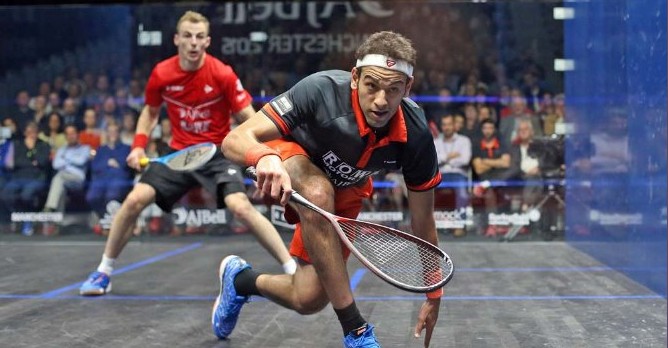