England’s Nick Matthew and Frenchman Gregory Gaultier ensured that the semi-finals of the J.P. Morgan Tournament of Champions live up to the event’s title after prevailing in the final two quarter-finals of the first PSA World Series event of the year at Grand Central Terminal in New York to set up an all-champion line-up. 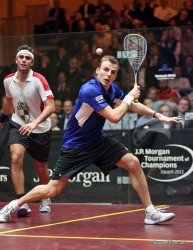 It was a vintage performance from Matthew as the world No2 prevented Egyptian Darwish from finding the openings from which he could unleash his shot-making prowess. Keeping the ball deep to the back corners and using a quick attacking volley, the Englishman never gave Darwish a chance to gain any momentum.

Having elected to not to get on court at all on his rest day since the second round, Matthew looked fresh and eager from the very start of the match. The 32-year-old from Sheffield raced out to an 8-2 lead, and won the game 11-5.

In the second, the lead changed hands a few times, but Matthew broke away to reach 10-5 before winning 11-7. From one-all in the third, Matthew never relinquished the lead and closed out the match with an 11-8 win.

“I am pleased with my momentum in the tournament,” said Matthew. “But as you move further along each round, it gets tougher and tougher. Sometimes when you have played well, you can take it for granted. I certainly have to stay on my toes mentally for whoever my next opponent is.

“Hopefully they will knock ten bells out of each other,” added Matthew, with a wry smile, referring to the Gaultier/El Shorbagy match that was just going on court. 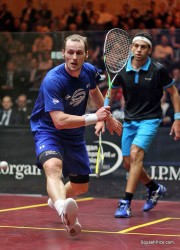 “In fact, the semi-final between Gaultier and the sixth-seeded Egyptian did at times resemble a slugfest,” said tournament spokesman Beth Rasin. “It was a fast and furious start from the very first point of play. Both men were hitting the ball quickly and with tremendous pace.

“Gaultier, however, managed to use the corners of the court more effectively than his opponent, and made El Shorbagy cover a lot of court.”

At 5-3 in the first game, the ensuing rally lasted several minutes with third seed Gaultier winning the point on his opponent’s error. Although Gaultier seemed to be dictating the rhythm of the rallies, El Shorbagy hung tight and managed to close the gap to 9-10. Gaultier won the game, however, at 11-9.

The 30-year-old from Aix-en-Provence shot out to a 6-1 lead in the second, but again El Shorbagy stayed close and tied the score at 11-all. Gaultier, continuing to pull his opponent from corner to corner, snatched the second game 13-11.

“The intensity of Gaultier’s competitive desire to win this match was abundantly evident from the double fist pump and loud shout of self-encouragement before he left the court for the 90-second game break,” added Rasin. 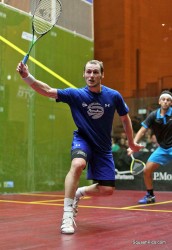 There was no lack of competitive desire on the young Egyptian’s part, however. El Shorbagy, at 22 the youngest player in the world top 25, continued to pummel the ball in an effort to overpower his higher-ranked opponent, but instead Gaultier used the pace to his own advantage by picking up the ball quickly.

Gaultier, the world No4, looked as though he would close out the match in three straight games when he had match-balls at 11-10, 12-11 and 13-12. El Shorbagy, now ranked a single place lower, showed no fear as he fought off each match point – twice with gutsy cross-court roll out nick winners – before taking the game 15-13.

The Frenchman, known for his mercurial temperament, demonstrated patience and mental fortitude in the fourth game: Continuing with his game plan to contain El Shorbagy’s potential power and explosive strength, Gaultier earned his semi-final berth with an 11-4 fourth game victory.

“He’s young and hungry,” said Gaultier of the opponent who has yet to beat him. “But I am old and hungry. I had to play very accurate shots and have good length, so I could keep him from volleying the ball. And I had to be aggressive at the right time.”

El Shorbagy acknowledged that shot selection was a key component of the match outcome. “I was not playing the right shot at the right time,” explained the loser of his fifth battle with the Frenchman since September 2009.

For Gaultier, the most important element of his winning game was his concentration: “I kept my focus, stayed calm and relaxed.” Becoming a father for the first time recently has had a beneficial effect on Gaultier’s competitive manner.

“Now that squash is no longer the most important thing in his life, the new father has been more relaxed on court, and very possibly playing the best squash of his career,” concluded Rasin.

El Shorbagy later told his followers on Twitter: “Disappointed to lose .. was so close but to be honest this is the best he has ever played against me … Next time Mr Greg!”

While Matthew and Gaultier will line up in one semi, the other will feature top seed James Willstrop, the 2010 champion from England, and world number one Ramy Ashour, the 2011 champion from Egypt. 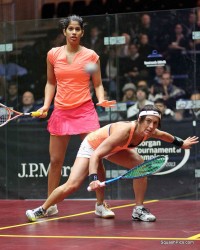 Family rivalry will take over when Natalie and Rachael Grinham face each other in the J.P. Morgan Tournament of Championssemi-finals later today.

Older sister Rachael, seeded fifth for the event, dispatched qualifier Joshana Chinappa after coming from a game down to progress to the next round of the WSA Tour Silver 25 event, held at Grand Central Station in New York City.  Chinappa had shocked crowds by defeating her compatriot and second seed Dipika Pallikal in round one, but was unable to sustain her good form to another upset. 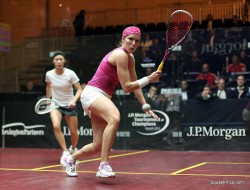 Seeded just one place higher than her sibling, Natalie Grinham saw a tricky first round tie against Egyptian Nour El Tayeb.  The Dutch international won a close encounter in five-games, before also coming from a game behind to defeat No.8 seed Sarah Kippax of England.

Tournament favourite Madeline Perry has been untroubled so far in the event, beating home interest Latasha Khan in three-games, before seeing off the challenge of No.7 seed Joey Chan of Hong Kong in last night’s quarter-finals.  The experienced Irishwoman will now face third seed Kasey Brown who was forced to two tiebreak games by local hope Amanda Sobhy yesterday.  Brown narrowly made it through the first round of the event after coming from two games down against qualifier Heba El Torky, to win in 62-minutes.