Yorkshiremen Nick Matthew and James Willstrop will contest the first ever all-English World Open final after prevailing in the semi-finals of the $327,500 Saudi PSA World Open Squash Championship, the richest PSA World Tour event of all-time at Sunset Beach Resort in the Saudi Arabian city of Al-Khobar.

Matthew, seeded to become England’s first winner of the title in the premier event’s 34-year history, ousted defending champion Amr Shabana, the former world number one from Egypt who was hoping to become a five-time winner of the trophy.

The 30-year-old from Sheffield, 5/7 down in their career head-to-head count before the match, got off to the perfect start, quickly establishing a 6-1 lead before finishing off the opening game with three winning shots.

In the second it was Shabana’s turn to take a lead, but Matthew, took five points in a row to draw level. The pair matched each other point for point before Shabana squandering his first game ball to allow Matthew to move two games ahead. 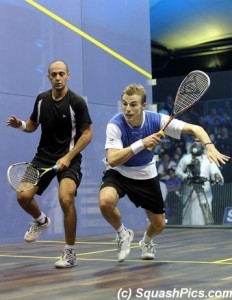 A tense third game saw the score move from five-all through to 10-all with the players winning alternative points before Matthew converted his first match-ball to win 11-6, 12-10, 12-10 after 59 minutes.

“I got off to a very good start in the first game, then I was just hanging on, he was just so tight down the forehand side, he was killing me there,” said Matthew, now in his first World Open final.

“I just got the belief from being one up, then two up, I just kept pushing and pushing, there was absolutely nothing in it.

“So proud to have two English boys in the final, but it’s not done yet,” added the world No2.

Willstrop also secured his first appearance in a World Open final after beating England team-mate Peter Barker. Despite having played each other countless times before – both on the Tour and in numerous junior clashes, including the World Junior Championship final – none can have been as crucial as this. 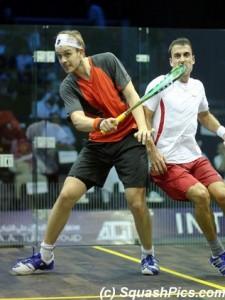 “It was on a knife edge again,” said Willstrop afterwards. “If I had gone two down against so physical a player as Pete, I would have been in big trouble. I just had to try to get past every hurdle, take it inch by inch, point by point and then move on to the next one.

“I knew I had an opening in the draw with Ramy going out – but seeing it and taking it are different things.

“World Open final: it’s what you dream about lying in bed as a ten-year-old …. and for it to be against another Englishman too!

“The pressure’s all on Nick tomorrow, he’s favourite. I’ll just try to do my best.”

The pair last met in the Commonwealth Games final in Delhi in October, with Matthew winning gold. Matthew has not lost to Willstrop since December 2007 and goes into the Saudi clash 15/8 ahead on their Tour head-to-head tally.