Bitter English rivals Nick Matthew and James Willstrop will clash in the final of the Canary Wharf Classic after negotiating physically challenging hurdles in the semi-finals of the PSA World Tour International 50 squash event atEast Wintergarden in Canary Wharf, London.

World champion Matthew and world number one Willstrop will meet for the third time this year – all of them finals – with Matthew winning both marathon encounters in New York and Manchester. 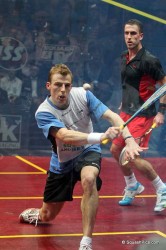 Matthew holds an astonishing psychological advantage, having won their last 19 matches – 13 of which on the PSA World Tour. Willstrop’s last victory was in the 2007 final of the English Open – in Matthew’s home city of Sheffield.

Willstrop said: “Everyone knows about the rivalry and if it gains media coverage for the sport then it is a good thing. Nick and I have an enormous respect for each other but he has enjoyed a long winning run and I want to do something about that in the final.”

Willstrop then withstood a ferocious onslaught from hard-hitting Egyptian Mohamed El Shorbagy before winning 3/1 in 61 minutes, the Yorkshireman’s shortest match of the week after two brutal battles against Saurav Ghosal and Tarek Momen. 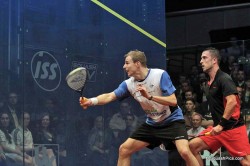 In a repeat of last year’s final, Matthew started slowly against a determined Barker but fought back to gain control of the match after losing the opening game.

He quickly built a substantial lead in the second game but from 7-1 up he had to withstand a sustained fightback from Barker before drawing level. The top seed stayed in front throughout the third but Barker launched another massive onslaught in the fourth to win it 11-9.

The crowd were willing the Essex player to maintain that form in the fifth but Matthew showed class and composure to power ahead from 3-3 to win the match without dropping another point. 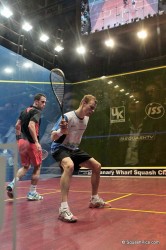 “There are very fine lines between winning and losing and Peter came out strongly in the first game, like he always does,” said 31-year-old Matthew after the 8-11, 11-7, 11-5, 9-11, 11-3 triumph which takes him into the 48th Tour final of his career. “He did the same in last year’s final and I was very pleased and relieved to get through.

“After beating the two local favourites on consecutive days (he overcame Daryl Selby in the quarters), I hope the crowd will give me a bit more support in the final!” 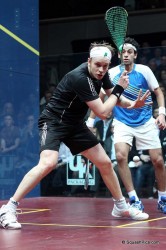 Willstrop began solidly against a nervous-looking opponent. Shorbagy, the 21-year-old world number eight from Alexandria, struggled to find his rhythm but after losing the first game he stepped up a gear to win the second.

He mixed powerful drives and volleys with some adventurous angles and a creative touch at the front of the court.

Willstrop then stamped his authority on the match, imposing a disciplined framework that eventually strangled Shorbagy’s attacking opportunities after some phenomenal rallies requiring immense physical commitment.

The Leeds-based Willstrop, who has won three Canary Wharf titles, controlled the third and fourth games and moved to match ball with a floated length that Shorbagy failed to scrape off the side-wall. 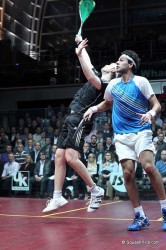 Willstrop said: “Shorbagy has so many different ways of attacking you. He has won two World Junior Open titles and has moved into the top eight in the world, which shows how quickly he has adapted to the playing at the highest level.

“I am delighted to be in the final and have clocked up many hours and miles on court this week.”

Willstrop’s day had begun with a BBC Radio Four interview on the Today programme, where he spoke about his recently-published book Shot And A Ghost, and squash’s bid for a place in the 2020 Olympics. 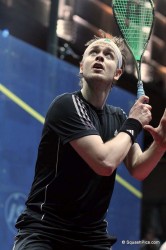 The 28-year-old, now in his 31st Tour final, added: “Tournaments like these, in a fantastic venue and with capacity crowds all week, showcase what a brilliant product we have, one which is absolutely perfect for the Olympic Games.

“The improvements in the TV production are superb, and it is bitterly disappointing that we are not to be involved in the 2012 or 2016 Games.

“Our tournament hotel is in Stratford, right next to the Olympic Park, and that makes it even more galling for us.

“But we will keep plugging away and I sense a groundswell of optimism that squash will finally win a deserved place in the 2020 Olympics.”