At stake in the dream final of the JP Morgan Tournament of Champions in New York between top-seeded Englishmen Nick Matthew and James Willstrop will not just be the title of the first PSA World Series squash event of the year, but also the world number one ranking in February.

Matthew, who topped the world rankings throughout 2011, battled to a 75-minute four-game win over Frenchman Gregory Gaultier – while in the earlier semi-final Willstrop, who succeeded his compatriot as world No1 this month, coasted to his fourth successive straight games success at Grand Central Terminal by beating England team-mate Daryl Selby in just 25 minutes. 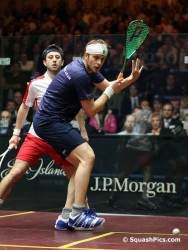 Given Willstrop’s near flawless performances in his first two matches against seasoned players, and the fact that Selby has never beaten his higher-ranked fellow countryman, the expectation was that Willstrop would certainly move past his unseeded opponent into the final.

The brevity of the match, however, was somewhat surprising: Willstrop, the 2010 Tournament of Champions titleholder, ran off 10 unanswered points in the first game before winning it 11-2.

Selby’s explanation was brief: “It was frustrating that I couldn’t play how I wanted to and give 100%.” The 29-year-old from Essex declined to elaborate further, although the word around the tournament was that he had bad blisters. 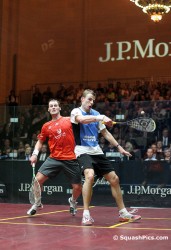 It was a different set of expectations for the Gaultier/Matthew semi-final, with both players having demonstrated a high standard of play and desire to win throughout the week. Frenchman Gaultier mentioned frequently that he planned his playing and training schedule so he could peak for this championship.

“Matthew has tried to temper expectations of his return to competition after a two month absence from tournament competition to recover from an injury, but his play through the tournament has been so impressive the expectations have become pretty high,” explained tournament spokesperson Beth Rasin.

Although third seed Gaultier held a 10-7 career advantage going into the evening’s match, the record over the past year has been 4-3 in the Englishman’s favour. The intensity of the match was palpable from the start as both players hit solid length and waited patiently for attacking opportunities.

Maintaining a lead of two points through most of the first game, 31-year-old Matthew gained the early upper hand with an 11-8 game win. The second was more of the same – the top seed winning 11-9.

Gaultier got back into the match when he nabbed the third 11-9 – but Matthew stepped up the attack in the fourth to take a 6-2 lead before going on to win the game 11-4. 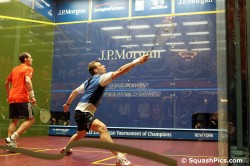 “It was a very tough cat-and-mouse game out there,” Matthew said. “We had a lot of tough rallies down the backhand side.” Ultimately, Matthew’s patience to force a Gaultier error or set up a winning shot carried the day.

There will be more than the Tournament to Champions title on the line when the two Englishmen step on court for the final: Matthew, a three time finalist, would very much like to take the trophy for the first time. “I’d certainly like to have my picture be added to the gallery of champions,” said top seed, referring to the portraits of the tournament’s titleholders that line the entrance to the venue’s Champions/VIP lounge.

The world number one ranking will also be at stake. “It’s a motivator,” said Willstrop. “But when you get to play in front of 500 people for the Tournament of Champions title, what more do you need?”

The final will be the first time the Yorkshire and England rivals have faced each other since October last year – since when Willstrop ran off three PSA World Series titles in a row and went on to succeed Matthew at the top of the world rankings.

But Matthew boasts a formidable 19-8 career head-to-head PSA Tour record over Willstrop – and an unbroken winning streak of 12 matches since December 2007.