The views of the seedings committee of the WSF Men’s World Team Squash Championship were fully endorsed when the top 16 seeds secured their places in the last 16 knockout stage of the biennial World Squash Federation event at Modern Squash in the French city of Marseille.

Spain ended a 28-year absence from the top 16 after beating event newcomers Iraq 3/0 to secure second place in Pool E. With all the players facing each other for the first time, long-time top-ranked Spaniard Borja Golan led the 12th seeds to victory, supported by team-mates Carlos Cornes (pictured below in action against Mohammed Hasan) and Bernat Jaume. “For years we have been relying on Borja but now we have strength in depth with players like Bernat, Carlos and Iker (Pajares Bernabeu) – and others like Edmon (Lopez) who we left at home,” explained Jonas Gornerup, Spain’s team manager. Competing in the event for the first time since 2009, Wales defeated Czech Republic 3/0 to ensure their place in the top 16. Number one Joel Makin put the 13th seeds ahead in the Pool D tie before Welsh second string Peter Creed beat Swiss Martin Svec (both pictured above) 11-7, 7-11, 11-5, 12-10 to clinch victory. 21-year-old event debutant Emyr Evans ensured maximum points with a straight games win over the 19th seeds’ Jakub Solnicky.

“We have to prioritise which world team events we play and haven’t played this event for a few years,” explained Welsh national coach David Evans, a former British Open champion. “But with Joel at his highest world ranking and Peter and Emyr both playing well, we thought we could do well here. And now we’ve achieved our first objective, which was to make the last 16.

“The 3/0 score of our defeat to Australia yesterday doesn’t do us justice as it was very close. I’m pleased with today’s performance as it shows that we can back it up.

“Now it’s another tournament and I think we play France – which would be great!”

After upsetting higher-seeded India in their opening qualifying tie, ninth seeds Malaysia confirmed their supremacy in Pool H when they beat Austria 3/0. But the 23rd seeds gave Malaysia a fright in the opening match when Aqeel Rehman twice led Nafiizwan Adnan, the Malaysian number one who 24 hours earlier stunned top-ranked Indian Saurav Ghosal to lead the surprise result.

“Today was tough for two reasons,” said Malaysian manager Major Maniam. “Firstly the boys had really hard matches yesterday and so are feeling a little tired, and secondly the glass court yesterday was a little dead, so on this plaster court it’s very difficult to win points.”

The win sees Malaysia through to face Scotland: “At this stage all the teams are good,” Maniam continued. “The Scottish boys are hard and aggressive players and they’re going to come at us. It’s going to be a hell of a battle!”

It was in Pool G that 10th seeds Scotland confirmed their place in the elite knockout stage by defeating Jamaica 3/0. The Scots took no prisoners – Alan Clyne, Greg Lobban and Kevin Moran seeing off their opponents, all making their debuts in the event, in straight games. The win saw the Scots finish as runners-up to Germany, the No.7 seeds.

“I don’t think it mattered too much whether we won or came second in the pool,” said Scottish team manager Martin Heath. “We knew we’d expect either Malaysia or India in the next round.

“We have a strong squad and are looking for wins at every position.

“At this stage of the event, it can come down to little swings of momentum one way or the other and we’re ready to deal with that.”

Jamaica, seeded 21, are appearing in the championship for the first time. Team manager Douglas Beckford said: “We were really hoping to get into the last 16, but in reality we knew it would be difficult and are now fighting for 17th place. We came in seeded 21 and hope to improve on that.

“It’s been a tremendous event for us and we haven’t been overwhelmed at all: 3/0 scores can sometimes give the wrong impression!

“We have two players competing on the PSA Tour – and winning titles – so that’s good for Jamaica.”

Finland survived the only tie decided by the third rubber when they beat 18th seeds Argentina 2/1. Olli Tuominen, the 38-year-old former world No.12 celebrating his ninth appearance in the championships, put the 15th seeds ahead when he beat Leandro Romiglio 11-9, 6-11, 11-9, 11-9 – but Argentinean Robertino Pezzota set up a decider when he beat Miko Äijänen in three games. 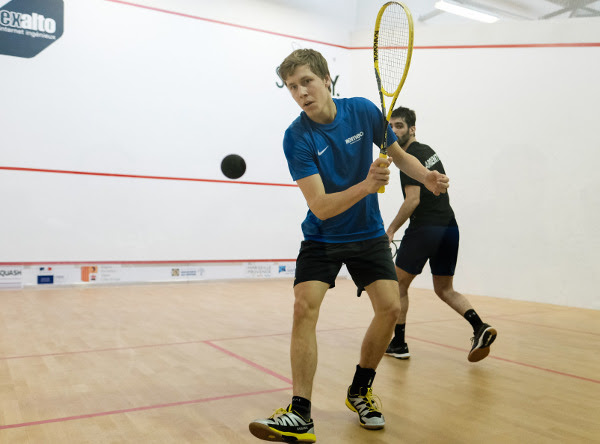 It was left to older brother Jami Äijänen to clinch victory for the Finns, overcoming Juan Pablo Roude (both pictured above) 11-7, 11-7, 11-9.

“We were definitely slightly nervous about this match,” said Finland national coach Tomi Niinimäki. “I watched Argentina play England on the first day and they were good. Winning today is a big relief – we are really happy to be in the top 16.

“We have some good players coming through – the (Äijänen) brothers are quite young and will be here for a long time. We can expect a lot in the future.

“Playing Egypt next will be big for us – especially for the younger guys.”

Seeded 14, Canada maintained their presence in the top 16 for the 22nd time since 1971 after beating Ireland 3/0. Team number one Nick Sachvie put the side ahead against the 20th seeds, beating Arthur Gaskin 11-7, 11-5, 9-11, 11-2 (both pictured below) before Shawn Delierre and Andrew Schnell wrapped matters up with 3/0 wins. “We knew we would be challenged here and had to be ready,” said Canada’s national coach Yvon Provencal. “Nick is playing his first worlds – and he is just fearless, and that’s great for the team to see.

“Shawn was in the zone today so I knew we were OK. Andrew was in need of a good match and he had a good run.

“We’re working to get up there with the top guys.”

Canada will face 4th seeds Australia for a place in the quarter-finals. “Australia will be tough. Their top two guys have more experience than we do on the glass, but the pressure will be on them!”

The final places in the top 16 were decided in the evening: 11th seeds USA confirmed their place by defeating South Africa, the 22nd seeds, 3/0. After Todd Harrity put the Americans ahead with a 3/0 win over Thoboki Mohohlo, second string Christopher Gordon put the result beyond South Africa’s reach after recovering from a game down to beat 45-year-old Rodney Durbach 9-11, 11-2, 11-7, 11-3.

US team manager Paul Assaiante said: “The 1,2,3 playing order was good for us. Thoboki moves like a cat so we had to keep the pace high.

“We were surprised to see Rodney at two: he has magical hands and is a wonderful competitor, and still plays a great game. But Chris dealt with him well.

“Now we get into the tall weeds – and will probably play Hong Kong. The team feels good and the guys are enjoying each other’s company.”

Durbach, the championship’s oldest ever participant who made his event debut 22 years ago, commented: “I felt good after the first game – I hit my shots well, it was nice.

“I didn’t feel at all out of place. It was probably the length of the rallies that I wasn’t used to – back home they don’t last that long!

“But I’m disappointed – I thought I could have done better.

In the final tie of the day, 16th seeds Switzerland beat former champions Pakistan, the 17th seeds, 3/0 and will face defending champions England in a bid to reach the quarter-finals for the first time.

Men's World Teams - Round of Sixteen