Favourites Egypt defeated defending champions England in the final of the WSF Men’s World Team Squash Championship at Salle Vallier in Marseille to reclaim the World Squash Federation title they lost to England four years ago in Mulhouse, also in France.

England reached the final for the ninth time since 1983 in comfortable style and presented a line-up for the final boasting three players with more than 300 international caps between them – probably the most experienced team ever to represent the country in the 50 years of the tournament!

By contrast the four-man Egyptian squad only included one player who had ever competed in the championship before – yet the three-man team in the final all had rankings within the world top five!

With the agreed playing order being 1, 2, 3, title-holders England presented three-time world champion Nick Matthew, the 37-year-old world No.6 appearing in the event for the seventh time since 2003, to face 26-year-old world No.4 Karim Abdel Gawad, a championship debutant.

Matthew was clearly not the player who despatched Australian number one Ryan Cuskelly in straight games just 24 hours earlier. The Yorkshireman was forced to take a three-minute ‘self-inflicted injury break’ midway through the second game – and it later transpired that he had suffered a minor recurrence of his old ankle injury during the warm-up for the match. Egyptian number two Ali Farag was also making his debut in the final – while English opponent James Willstrop was not only celebrating his fifth successive World Team Championship battle against an Egyptian opponent since 2003, but also his 156th cap for his country.

Former world number one Willstrop, 34, did what he could to keep his 24-year-old opponent at bay – but Farag was clearly on a mission and after 36 minutes clasped his face in his hands as he celebrated his championship-winning 11-5, 11-9, 11-5 triumph.

“The word big is an understatement – it is much bigger than big!” gushed Farag (pictured below in action with Willstrop) when asked to comment on the significance of the win. “I felt I had the whole Egyptian squash community on my shoulders. I wanted to make them proud.

“Four years ago, I was still at college. I remember watching the final – it was a dream of mine to wear the Egyptian shirt.

“Winning the US Open with my wife Nour (El Tayeb) was very special, of course – but, because this was for Egypt, I can say it is the highlight of my career.”

When it was pointed out that Egypt had the luxury of not playing their fourth string Ramy Ashour, one of the sport’s greatest names and a three-time world champion, Farag said: “It says a lot about how much he values the team that Ramy, our captain, was happy to leave the team selection to our coach and not play tonight.

“We will celebrate for just tonight then get back to work to prepare for next week’s PSA World Championship.” Ashraf Hanafi, the recently-appointed Egyptian national coach, added: “The most important thing is that we have got the title back. I am very happy to be their coach.”

Nick Matthew had much praise for England’s successors: “They were quality opponents tonight – especially Ali against James.

“We knew we had the experience and we hoped that would carry us through, but I didn’t quite get into the match.

“We felt we had more to give. We were playing guys at the pinnacle of their careers. We wanted to push them to their absolute limits – we knew we had the best opportunity now before they dominate for perhaps the next decade.

“But we’re proud that we are still second best in the world.”

On his injury, Matthew explained: “It was in January 2015 that I was told I needed surgery on my ankle – as a result of which I changed my whole life around: I changed everything on the back of that – my training, my diet, my playing.

“The way I played in the semis against Australia was some of the best squash I’ve played this season. But I felt a twinge during the warm up. The manner of my defeat gave them the momentum going into the second match.

“But I don’t want to overshadow their dominant form tonight.”

Success in Marseille means that Egypt now have all the men’s and women’s, senior and junior, team and individual WSF and PSA world titles – EXCEPT the Men’s Junior World Team title, in which final in 2016 the country narrowly lost to Pakistan!

After their shock quarter-final exit to Hong Kong China, hosts France – the third seeds – beat New Zealand in the play-off for fifth place earlier today on the all-glass showcourt at Salle Vallier. “If someone had told me we’d be playing on finals day I would have been delighted,” said French national coach Renan Lavigne. “But not to play for fifth place!

“It’s not we’d been working for. But I thought Hong Kong dealt with the situation on Friday better than we did and you have to hand that to them. My guys gave everything they had.

“The last two days have been the toughest for me over the past five years. We’ve been looking at everything, including what we need to do to improve.

“We deliberately rested Greg (Gaultier) today to give the rest of the team the responsibility, and they did what we wanted – and even though Marche lost, he showed great strength and got a bit of confidence back.

“Next week we can make amends in Manchester (at the PSA World Championship) – but as far as this event is concerned we will have to wait another two years. It’s in Washington in the USA – and we will be there!”

One of the first positions to be decided amongst the 24 teams was the one for 23rd place – won in impressive style, against the odds, by Iraq, the 24th seeds making their debut in the event.

Despite team number one Borja Golan being unavailable for the last three days due to injury, 12th seeds Spain ended in 11th place to record their highest finish ever in 13 appearances since 1985. 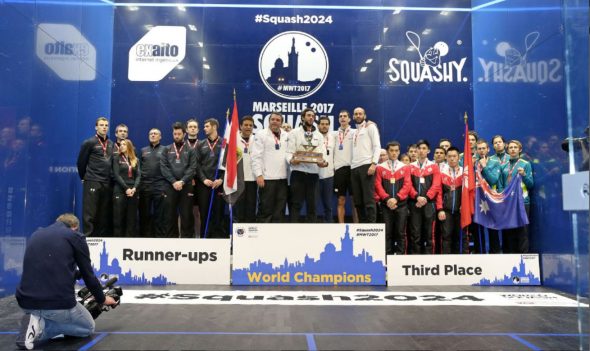