Top Seeds Untroubled On Day One At World Teams In Marseille

The top eight seeded nations sailed through their opening encounters on day one of the WSF Men’s World Team Squash Championship in Marseille, all winning 3/0 at Modern Squash in the French city.

The 25th staging of the biennial World Squash Federation event is being held in France for the second time in four years. After qualifying rounds at Modern, knockout action from the last 16 round onwards will take place on an all-glass showcourt at Salle Vallier, leading to the final on Sunday (3 December).

The event got underway with a confrontation between two of the giant nations of world squash: Egypt the No.1 seeds looking to gain revenge for their surprise defeat to England in the 2013 final and win the title for a fourth time, faced Pakistan, who reigned supreme between 1981 and 1987, and have been champions six times in all – but in 2017 are the 17th seeds.

Whilst the favourites come into the event with four players in the world top 11, underdogs Pakistan have a squad featuring only one player ranked within the top 150.

Fresh from making the finals of three major PSA World Tour events in the past six weeks, and becoming the US Openchampion, world No.4 Ali Farag sealed Egypt’s overall win by beating Shahjahan Khan 11-3, 11-4, 11-9. 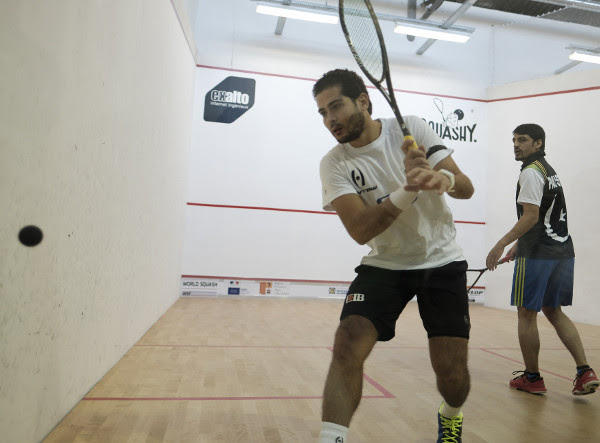 It was in the third match that Pakistan secured their only game of the day when Farhan Zaman claimed the third against Egypt’s Karim Abdel Gawad (both pictured above) before the world No.2 wrapped up the match 11-7, 13-11, 7-11, 11-4.

“We would have preferred to play opponents like Pakistan in the second match – it’s a pity that such a great squash battle happened on the first day,” said Ashraf Hanafi, the Egyptian National Coach.

“We don’t know their players – but we knew they’d be dangerous. It was a tough draw for Pakistan.

“The most important thing for us is the team spirit – I know we have a lot of stars in our team, and it’s important to respect that,” added the former British Open O35 champion.

“We lost our title four years ago and we want to win it back.”

Pakistan No.1 Farhan Zaman, the world No.58 from Peshawar, added: “We have come here with a very inexperienced squad – we are not expected to do well so there is no pressure on us. The last time I played Karim I was 2/0 up and lost in five, so I knew what to expect.”

Second seeds England began the defence of their title in a tie against Argentina. The 18th seeds were making their seventh appearance in the championships, with a best-ever finish of 13 in 1995, while England, with five titles to their name, have never failed to reach at least the semi-finals in all 17 appearances since 1981.

Third string Daryl Selby put England ahead with an 11-3, 11-6, 11-6 win over Juan Pablo Roude before team-mate James Willstrop took to the court with fellow 34-year-old Robertino Pezzota, the world No.94 from Argentina who recently became the Pan American champion for the first time. England No.1 Nick Matthew – like Willstrop, making his seventh successive appearance in the event – beat Leandro Romiglio 11-4, 11-8, 11-5 to give the team maximum points.

“I was happy with the squash side, but was disappointed that I allowed myself to be caught up in the physical side of the match,” admitted Willstrop after his match.

When asked if he still had goals in the sport, the most capped Englishman replied: “I don’t really have goals – I just want to arrive at the next event fit and ready to perform, and that goes for the World Championship in Manchester and hopefully the Commonwealth Games next year. Only once I’m there do I think about winning.”

The event welcomed a team representing Iraq for the first time. The newcomers put up a commendable fight before going down to Hong Kong China, the fifth seeds who are predicted to achieve their best ever finish in their 16th appearance in the championships since 1979.

“I am very happy that Iraq is participating in this event for the first time,” said Ali Albawi, President of the Iraq Squash Federation. “This is a big day for us – we now have six players who are ranked by PSA and we are determined to do well.

“It would be great if we could make the top 16 this time – but we hope to do even better next time!” 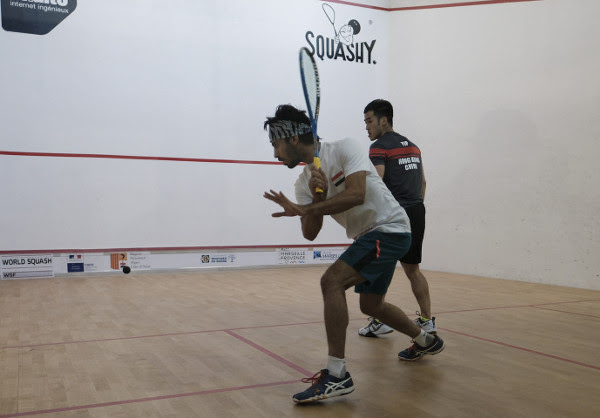 “The Iraq players were not bad – and hit the ball well,” said Robertson (HK’s Yip Tsz Fung seen battling with Iraqi Rasool Alsultani above). “They were aggressive players, which is a good thing.

“We’ve got some good players who play at a high level – and I want to see them play at that level here.

“This event only happens every two years, so you have to get it right. We’ve got the Asian Games next year, which is very important. How the team perform here will give me a feeling for how they will perform there. Today was a good start.

“I like this event – it’s one where countries can create a bit of history!”

In the final session of the day, all attention was focussed on twice runners-up France, who are seeded three and bidding to win the title for the first time. The hosts faced European rivals Ireland, the 20th seeds whose best finish is 10th place. The surprise first ever encounter between the two nations’ top strings saw the ‘French General’ Gregory Gaultier see off Arthur Gaskin (both pictured above) 11-8, 11-7, 11-6 to end the day on a local high.

“Ireland put on a good fight – and we needed it,” said French National Coach Renan Lavigne afterwards. “They played their top three and they tried their best – and we expected it.

“It was a good win for us. It wasn’t ideal playing at night and it was important we didn’t start too hard and pick up any injuries.”

When asked what it would mean to win the title, Lavigne said: “We’ve never experienced it so it’s difficult to imagine. I remember it was an unbelievable feeling when Greg won the world individual title and when we won the European team title after losing in the final so many times.

“We will have to wait – we know what to do and we know how important it would be. The sports minister will be here on Friday. The team is fully prepared.”