Coll and King, bronze medal winners in 2018, have looked in brilliant form throughout the tournament and today were unstoppable as they overpowered England to return the title to New Zealand after 16 years of Australian dominance.

After an even opening exchange, the Kiwi duo powered away from 2-2 to 11-3 winners, with England making too many mistakes and looking panicked by New Zealand’s relentless energy.

The 3/4 seeds picked up where they left off in the second game, with the explosive Coll, who threw himself around court, and the accurate King quickly building a 7-3 lead.

England briefly found a response, with the cauldron atmosphere building as the increasingly confident Waters and Waller began to chip away at New Zealand’s lead to pull the scores back to 8-6, but ultimately had too much to do and a strong finish from the Kiwis delivered them the title with an 11-6 win in the second game.

In scenes more reminiscent of a rugby match than squash, Coll and King, who was sporting a bruise to the eye inadvertently caused by Coll’s celebrations, were stunned as their New Zealand teammates and fans passionately performed the Haka.

Afterwards, Coll said: “That [Haka] is something I’ll never forget, thank you so much guys. To celebrate like that is one of the coolest moments in my career.”

King added: “Last week, I didn’t think we’d be standing here today. We had unfinished business after the Gold Coast; I really wanted this and clearly so did Paul with the amount of diving he was doing!”

While King will have the opportunity to win a second gold and equal Rachael Grinham’s record of eight Commonwealth Games medals tomorrow, when she and Amanda will defend their women’s doubles title, this win draws the curtain on a dream Games and season for Coll, who besides winning the singles gold on Wednesday became the first male from New Zealand to reach World No.1 earlier in the year. 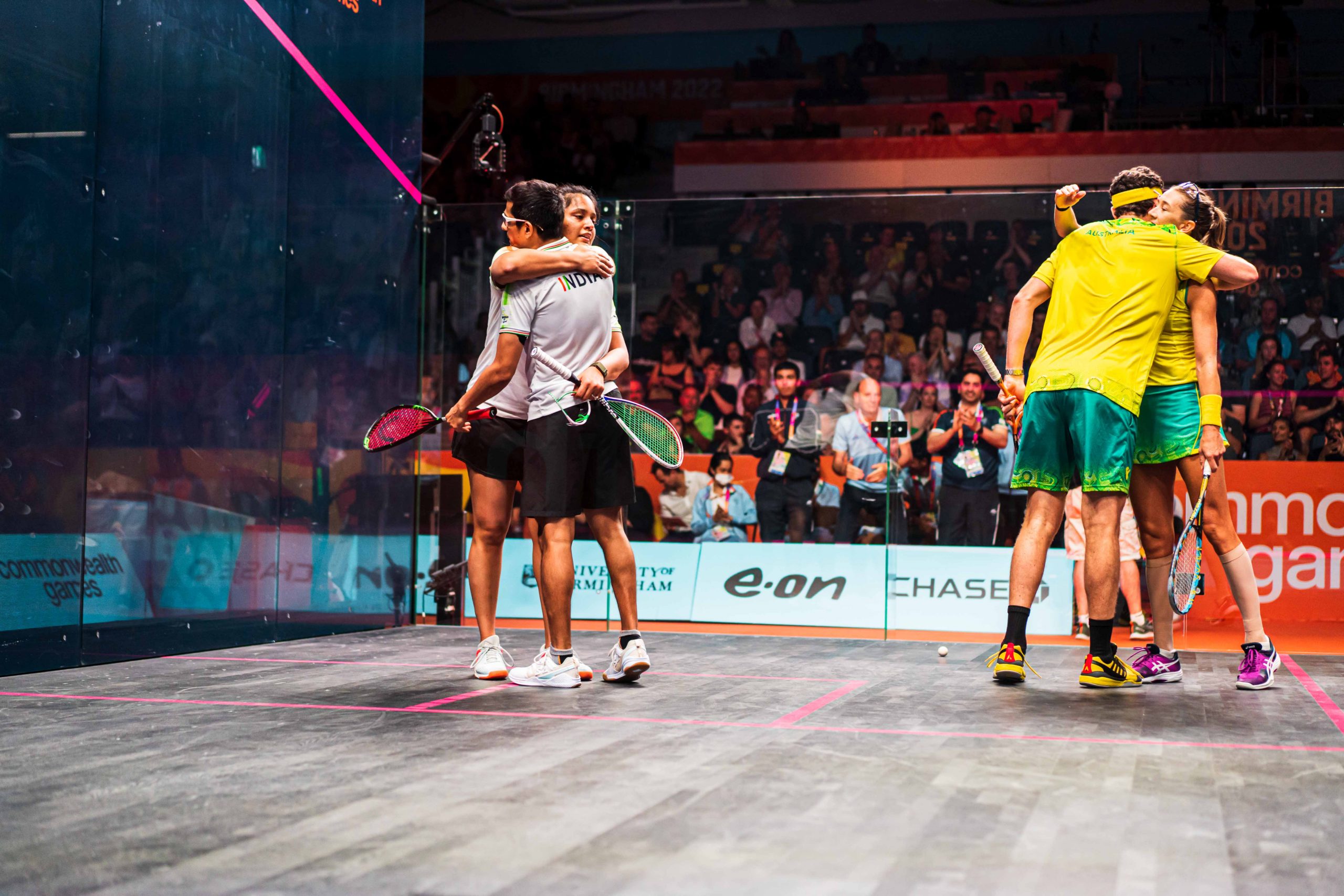 In the bronze medal match, India ended their tournament with a flourish by beating 2018 champions Donna Lobban and Cameron Pilley of Australia 2-0, leaving Australia without a medal for the first time since squash was added to the Games programme in 1998.

While India had gone in with hopes of more, with their mixed and women’s doubles teams both seeded first, 2018 silver medallists and siblings-in-law Dipika Pallikal Karthik and Saurav Ghosal will leave with their heads held high after a dominant performance in their final match delivered an 11-8, 11-4 victory.

“To come out today and play against very good players, to produce a performance like that, especially from Dipika after yesterday, shows the metal that she has. I’m proud we can go home with this bronze medal.” 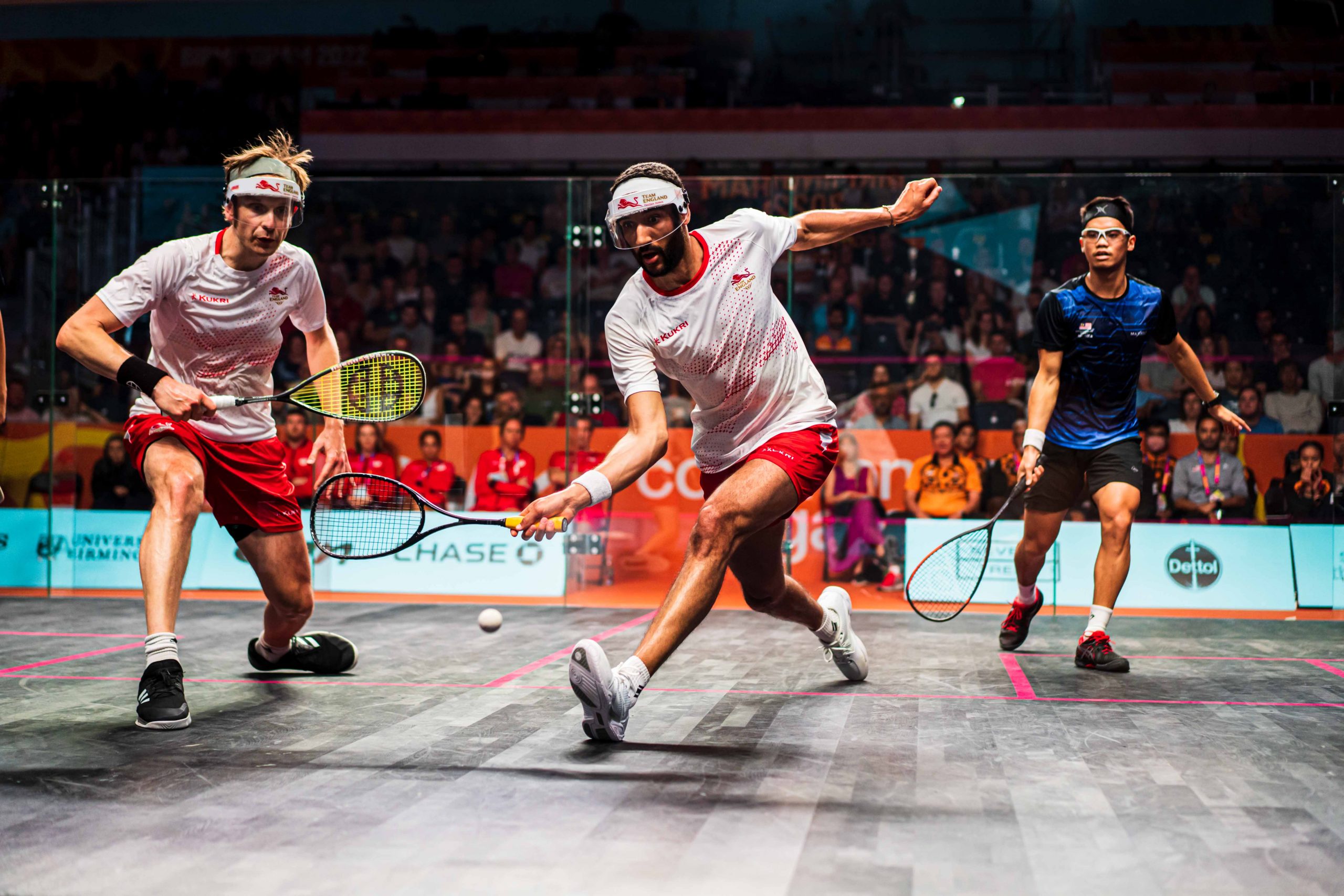 Elsewhere, there was plenty of excitement in the men’s and women’s doubles competition. In the men’s draw, the hosts made history to set up the first ever one-nation final, while Waters will have an opportunity for revenge over King in the women’s event.

Despite the positive results, the afternoon session was a nervous one for England as top seeds Declan James and James Willstrop survived an almighty scare against 5/8 seeds Eain Yow Ng and Ivan Yuen in their semi-final.

The reigning World Champions fell 8-1 behind to the aggressive strategy of the Malaysians in the first game on the way to an 11-5 defeat, before recovering to take the second 11-5.

In a tense last game, the 2018 bronze medallists were in trouble at 7-3 down, before they fought back brilliantly. Roared on by the crowd, England scored a flurry of points to take the decisive game 11-8.

“The first two rounds went perfectly according to plan, but we said we knew there would be a time when our backs were against the wall and this was that moment, the moment you fight and dig,” James said.

Their opponents tomorrow, Daryl Selby and today’s mixed doubles silver medallist Waller, also had to endure some nervous moments in a 2-1 win over No.2 seeds Scotland.

The 2018 silver medallists appeared to be cruising into the final when they took a 5-0 lead in the second game after winning the first 11-8.

Greg Lobban and Rory Stewart, though, fought back well, levelling the match with an 11-8 win before the 3/4 seeds rallied to take the third 11-6.

Afterwards, Selby said the atmosphere generated by the crowd had played a crucial role in their victory in the third game. 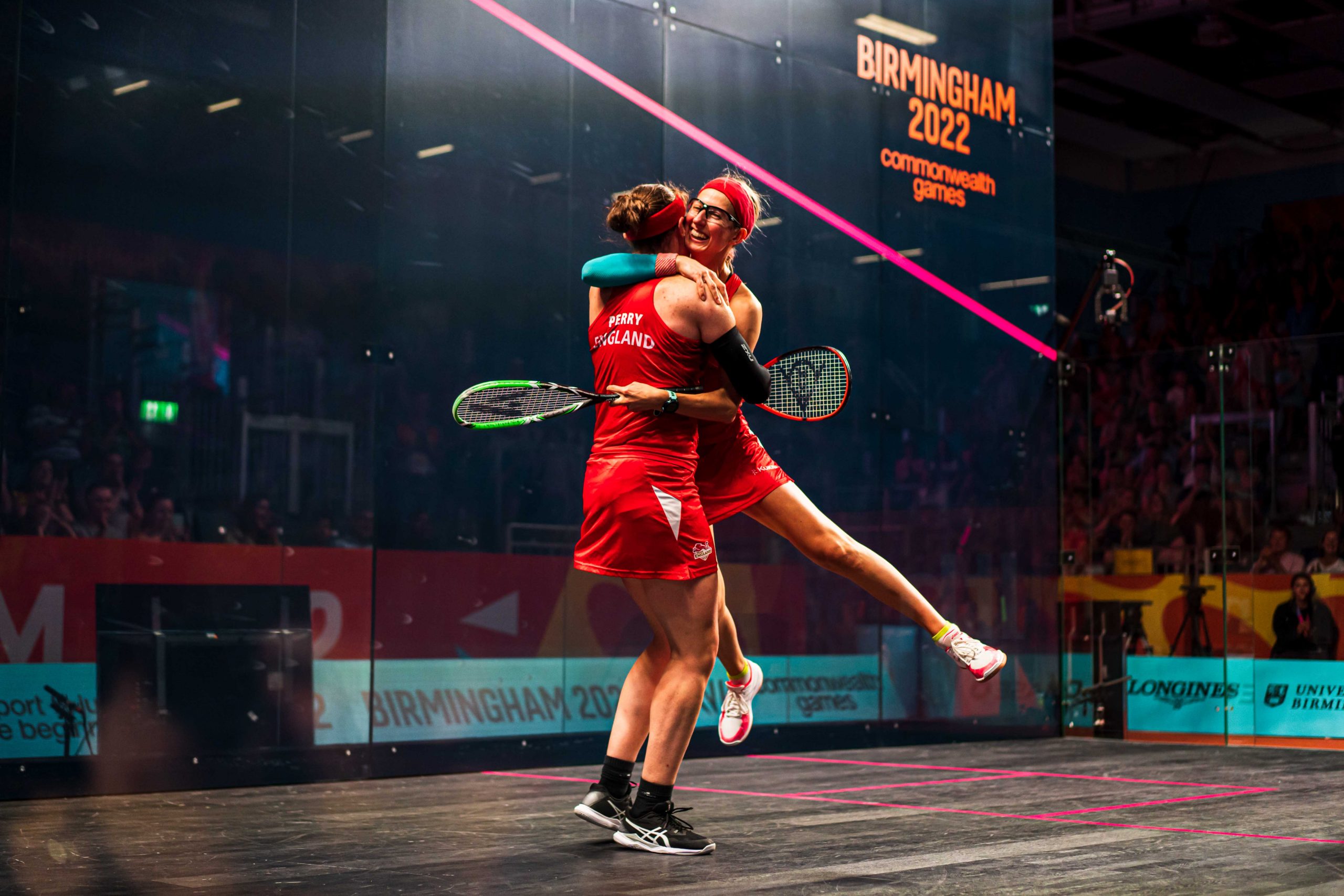 There was another comeback in the women’s semi-finals, as England battled back against Malaysia’s Aifa Azman and Rachel Arnold to ensure there would be home representation in all three finals.

No.2 seeds Sarah-Jane Perry and Waters dropped the first game 11-8, with the Malaysians’ tactic of switching sides disrupting the rhythm of the English pair.

2014 bronze medal winner Waters and her partner Perry soon responded, though, levelling the scores with an 11-6 win in the second game before edging the third 11-9.

“Their tactics were very brave and [them switching sides] takes getting used to,” Perry said.

Waters and King will clash again tomorrow after King and Landers-Murphy overcame Malaysia’s 5/8 seeds Ainaa Amani and Chan Yiwen – who knocked out top seeds India in the quarter-finals – 11-9, 11-7.