Nicol David celebrated her third successful title at the Cedrus Investments Women’s Cayman Islands Open – but the world number one from Malaysia had to work for almost an hour, and squandered match-balls in the third game, before overcoming England’s world number two Jenny Duncalf in the final of the WISPA World Series squash event in its third year at Camana Bay in Grand Cayman in the Cayman Islands.

Despite then dropping the second game, Duncalf had made a late revival – and used this to good effect in the third. From 6-4, the 28-year-old from Harrogate opened out to earn five game balls at 10-5. 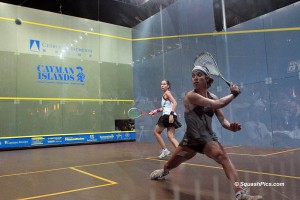 But David battled back point before reaching match-ball both at both 11-10 and 12-11. Duncalf refused to concede, however, and clinched her latest game-ball to force the match into a fourth game.

And Duncalf made a good start in the fourth too, leading 4-1. But that was as good as it got: David reeled off the last seven points unanswered before celebrating her title-winning 11-7, 11-6, 12-14, 11-4 victory after 59 minutes.

“I tried to play more patient squash, to make it less work for me as I’d had such a tough match yesterday, not rushing things, giving myself more time,” Duncalf explained to www.squashsite.com later. “It worked at times, but just at the end of the first and the second games I couldn’t push on like she did.

“I made it hard for myself in the third, to say the least, but I’m glad I took that one. I wanted at least to make a real final of it. The third took a lot out of me though, and in the fourth I just couldn’t summon up enough energy to push through. She realised that and she made it hard for me.

“It’s been a great tournament,” added the England number one. “I love playing here. We all do!” 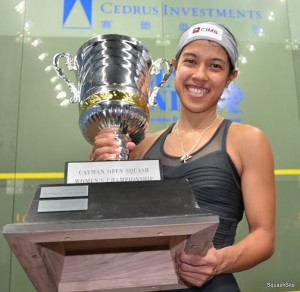 Nicol David, now the proud winner of 52 WISPA World Tour titles, was full of praise for her Tour rival: “Jenny played really well, especially in the third, she just put a lot of shots in. I knew I just had to work hard to get it back but couldn’t quite make it.

“In the fourth she got a good start but I didn’t want to let her get too far ahead so I had to really focus and up my game from that point. I’m happy to win 3/1, it was a tough match.

“It’s so great being here in Cayman, the people are so friendly, the sponsors put so much into the event, Dan (Kneipp) does a great job organising it and the crowd really make it a great tournament – we’re all looking forward to coming back next year for the World Open!”