Qualifiers Nicolas Mueller and Hisham Mohd Ashour secured unexpected places in the last 16 of the JP MorganTournament of Champions after major upsets in the first round of the PSA World Series squash event at Grand Central Terminal in New York.

Egyptian Hisham Mohd Ashour punctuated the day’s play with a dramatic come from behind victory over Australia’sCameron Pilley.

Ashour senior was anything but relaxed in the evening’s last match. “I have been playing so well for the past two or three months; sometimes I would feel I was floating on court,” said the Egyptian. 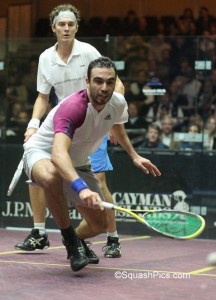 “But tonight I was so stressed.” With Pilley enjoying a 2/1 lead, Ashour defended against four match balls after Pilley went up 10-6 in the fourth. Both the fans in the stands and the spectators who watched the match on the closed circuit TV feed were on the edge of their seats and cheering as Ashour used a variety of shots to keep himself alive in the match. 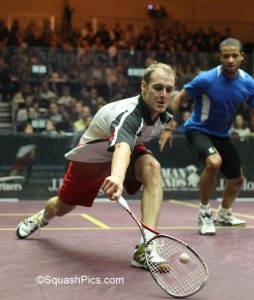 Switzerland’s Nicolas Mueller eliminated England’s higher-ranked Adrian Grant 11-7, 11-5, 7-11, 11-8. In the only match of the day that did not involve an Englishman or an Egyptian, Dutchman Laurens Jan Anjema defeated Miguel Angel Rodriguez of Colombia 11-5, 11-8, 11-6.

“Last year was one of my best years,” said Anjema, referring to the fact that he cracked the top ten for the first time in his career. “But I went out on the court without any expectations and felt very relaxed today.”

England’s Daryl Selby started off the day’s play with a three game victory over Australian qualifier Ryan Cuskelly. The 4-11, 11-1, 11-2, 11-4 match scores belied the competitiveness of the match which lasted 63 minutes.

“Even though I lost the first game, I was moving well. I played with more conviction in the second,” said Selby. “He’s a gutsy, dangerous player and I didn’t want to give him any chances.” When reminded of the lopsided scores in the second and third games, Selby smiled and said, “The rallies were long, but I won them all.”

Although fourth seed Amr Shabana defeated his Egyptian colleague Mohammed Abbas 7-11, 11-8, 11-9, 11-7, he did not sound like a happy winner after the match.

“I wasn’t comfortable today,” said the four-time world champion. “I didn’t feel sharp and I feel lucky to win.