World Champion Karim Abdel Gawad’s stunning 2016/17 season continues to go from strength-to-strength after the he put in a superb performance to defeat World No.1 Mohamed ElShorbagy in the final of the 2016 Qatar Classic held at the Khalifa International Tennis and Squash Complex in Doha – lifting his first World Series title in the process. 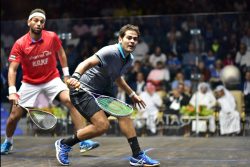 The 25-year-old from Egypt has been the man in form over the past few months and triumphed at the PSA Men’s World Championship just a fortnight ago in Cairo to lift the sport’s biggest prize – beating ElShorbagy in the semi-final, before moving on to overcome Ramy Ashour in the showpiece finale. 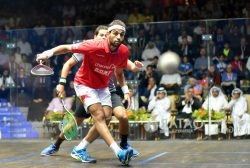 ElShorbagy went into the match having won this tournament the last two times it was held in 2013 and 2015, but it was Gawad who played with composure and accuracy to come out on top in tie-breaks in the opening two games to go 2-0 up. 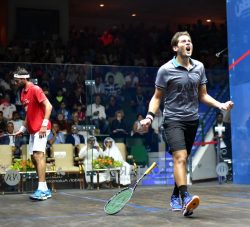 ElShorbagy tried to halt his compatriot’s momentum in the third, but Gawad – playing with the skill and effortless brilliance that has become par for the course from the World No.3 this season – held firm to take it 12-10, 15-13, 11-7 to seal the title.

Gawad’s victory also ensures that he will overtake ElShorbagy at the summit of the 2016/17 PSA Road to Dubai Standings – where only the top eight players will qualify for a place at the season-ending Dubai PSA World Series Finals – after taking the maximum points on offer in Qatar. 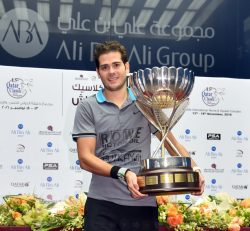 “For the first time, I was under pressure. When you are a World Champion, people expect you to win and expect that you have a big chance to win. That is a new element I had to integrate into my preparation.

“Being World Champion and Qatar Champion sounds good, really good. I’m living the dream. But next season, I’m aware that I’ll have to make sure I’m very consistent if I want to stay in competition with the top boys.”

ElShorbagy was effusive in his praise of his opponent, saying: “Karim deserves to be the champion, he’s played so well in this first part of the season. It was a great match, and the best player on the day won.

“I need to thank my team for the support they are giving me day in, day out. I couldn’t do it without them.” 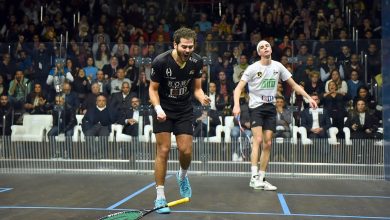