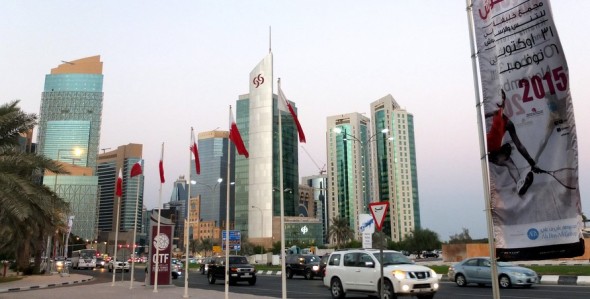 The 14th Qatar Classic, the second PSA World Series event of the season, is down to the quarter-final stage in Doha …

Rising Egyptian talents Mazen Hesham and Ali Farag produced two of the most impressive and dominant performances of the tournament so far to progress to the quarter-finals of the 2015 Qatar Classic in Doha today (Nov 3). 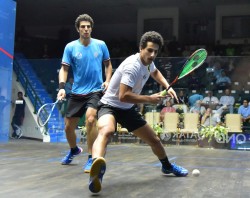 The duo will meet each other in a highly anticipated encounter tomorrow after 21-year-old Hesham produced a sensational performance to overcome World No.6 Omar Mosaad, the Delaware Investments U.S. Open runner-up, in straight-games while Farag showed class and maturity beyond his 23-years as he ran proceedings against experienced English campaigner and World No.16 Daryl Selby. 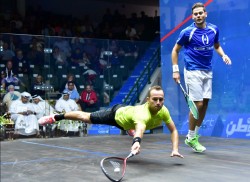 “It’s my first time in the second round of a World Series tournament and now I’m into the quarters for the first time and that feels amazing. I’m really happy with how disciplined I played as I didn’t go for many silly shots and that is pleasing.”

Meanwhile Karim Abdel Gawad overcame Gregoire Marche of France in an enthralling 81-minute battle that ranks as one of the tournaments standout encounters so far to set up a last eight match up with French number one Gregory Gaultier.

In a back-and-forth battle Gawad came from 7-3 down in the fifth game, notching up seven consecutive points, to defeat the acrobatic Marche. 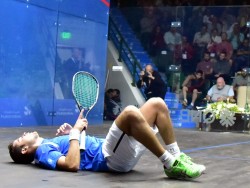 “Even when i was 7-3 down I still believed that I could win because he still had to win four points to make it,” said Gawad.

“So I tried hard not to think about the score and just told myself to push as hard as I can on each point because that was absolutely critical, especially as I need to be even more constant to keep my top ten ranking and keep improving.

“I didn’t play my best today so I’m happy to win and I know that’s what the top players do – they win on bad days – so I’m very happy I was able to do that.” 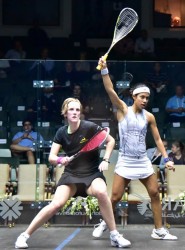 In the women’s draw defending champion Nicol David, who lifted the trophy when the tournament last took place in the Emirate in 2011, led the charge into the last eight with a straightforward victory over Victoria Lust to keep alive her hopes of winning a first PSA World Series title since the 2014 U.S. Open.

“It was a bit of an up and down match but I am happy to get through in three,” said David.

“In the middle of each game she was doing her own things so I had to reassess and make sure that I worked to impose my own game. I have been working hard on improving my strength in training to get lower on the ball, be faster onto the ball and also to be more assertive with my shots.”

Elsewhere Egyptian Nour El Sherbini came through a battle of sharp-shooters with Rachael Grinham while Frenchwoman Camille Serme prevailed in a battle of wills with American number one Amanda Sobhy.

Australian Ryan Cuskelly and Hong Kong’s Max Lee will compete in the quarter-finals of a PSA World Series tournamnent for the first time in their careers after coming through their second round encounters at the 2015 Qatar Classic at the Khalifa Tennis and Squash Complex in Doha. 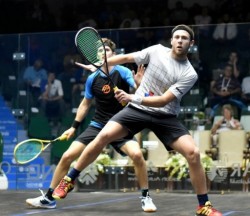 Just one week after collecting the biggest PSA World Tour title of his career at the Welaptega Bluenose Classic and in the midst of his best ever form Cuskelly produced a stunning performance, hitting scintillating winners from all angles, as he swept aside England’s Chris Simpson in straight-games.

“I maybe didn’t have the confidence before that I could beat anyone in the world and I’ve had a few good wins and results in big tournament so I’ve got that belief now,” said Cuskelly.

“There was a time when I was stuck at 40 in the world for nine years or so and I thought maybe I wouldn’t actually make it but I stuck in and worked really hard and the last six months have been really good.

“I can’t believe I’m in the quarter-finals. I’ve been coming here for a few years and I’ve always watched the quarters and the semis so to be part of it now is awesome and I think I have a good chance in the next round as well.” 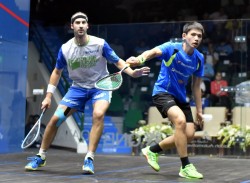 Cuskelly will face Colombian World No.5 Miguel Angel Rodriguez in the quarters while Lee will face World No.1 Mohamed Elshorbagy after downing German World No.6 Simon Rösner 3-0 to book his maiden last eight appearance.

“I can’t believe I came through in three,” said Lee. “The last few times we have played he has won so I’m very happy to make the quarter-finals of a World Series tournament for the first time.

“I feel fresh so I focused on trying to play at a fast pace and move him around the court and I think I had a good performance. I really wanted to win today so I tried very hard not to think too far ahead and make sure I got my plan right and played with good length and attacked to take the ball early.” 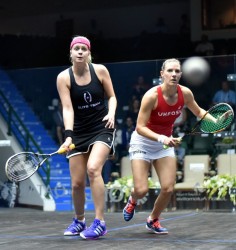 n the women’s draw England’s World No.3 Laura Massaro, winner of the first PSA World Series tournament of the season two weeks ago at the Delaware Investments U.S. Open, celebrated her 32nd birthday by booking a place in the last eight of the tournament in Doha.

She was forced to work hard for her berth in the quarters by compatriot Fiona Moverley who blended delicate hands and court craft to trouble Massaro from the off but the experience 2013 World Champion managed to find enough in her tank to hang in and see out the match.

“I didn’t play 100 per cent at my best and when you do that against someone as dangerous as her you can get hurt but I felt like I worked her game out as the match went on,” said Massaro. 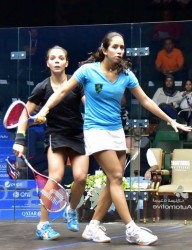 “Every game was tight so I’m pleased to get off in four games. My first round match was quick and then I had a rest day yesterday so I feel like I’ll be better for the remainder of the tournament after having a tough test today.”

Massaro will take on Egyptian teenager Nouran Gohar, the World Junior Champion, in the quarter-finals which will also feature India’s number two Joshana Chinappa, who followed up her first round win over World No.1 Raneem El Welily to defeat Yathreb Adel and reach the last eight of a World Series tournament for the first time since 2013.

“It was hard to reset for today’s match after beating Raneem in the first round but I tried hard not to overthink anything and to just play simple,” said Chinappa.

“That’s what I did against Raneem and I knew Yathreb would be tough because she had a great win over Dipika in the first round so I’m happy I managed to stay focused on and not think too far ahead and put in a good performance.”