The 22-year-old from Cairo first secured the top spot in January this year – but was replaced in June by England’s Nick Matthew, who arrived in Hong Kong with five successive PSA World Tour titles to his credit, including the previous two PSA Super Series events, the Sky Open and Australian Open.

But the 30-year-old top seed from Sheffield crashed out in the quarter-finals in Hong Kong, beaten for the first time in nine meetings by his England team-mate Peter Barker.

Matthew’s pole position would have been safe had Ashour not won the Super Series title. But, playing the best squash of his career, the Egyptian reached the climax, then battled to a stunning 10-12, 11-9, 11-9, 9-11, 11-9 win over France’sGregory Gaultier – also a former world number one – in a 90-minute final. 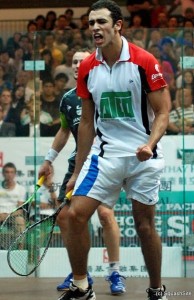 “That was a quality match – I’ll watch it over and over again to see what I did right, what I did wrong, and learn from it,” said a jubilant Ashour at the post-match presentations.

“Now I’m world number one it’s great, but we’ve still got lots of big tournaments coming up and my aim is to keep playing well and keep winning.”

Indeed Ashour and Matthew are seeded to face each other in September’s final of the ROWE British Grand Prix, the sixthPSA Super Series event of the year in England – an event which could result in further changes to the world ranking hierarchy.

But his first semi-final berth in a PSA Super Series championship this year lifts Peter Barker to seventh place, while France’sThierry Lincou slips to No8.

And there is further Egyptian success with the world top ten debut of teenager Mohamed El Shorbagy. The 19-year-old from Alexandria, who is combining a squash career with studying for a degree at a University in the UK, made the last 16 in both the Australian Open and Hong Kong Open – and rises three places to a career-high No10.