It was after 90 action-packed minutes that Egypt’s Ramy Ashour finally emerged victorious from the final of the $147,500 Cathay Pacific Sun Hung Kai Financial Hong Kong Open – to not only win the fifth PSA Super Seriessquash championship of the year but also ensure his return to the top of the PSA world rankings next month.

The 22-year-old from Cairo knew that only a win would take him above Nick Matthew, the Englishman who wrested the world number one ranking from him in June – and who crashed out at the quarter-final stage in Hong Kong. 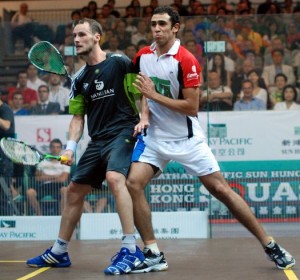 But it was Gregory Gaultier that took the opening honours in the final on the all-glass court at the Plaza Hollywood shopping centre in Kowloon. The fifth seed from France won the first game after a tie-break, then moved 5-1 ahead in the second.

The Frenchman, desperate to end his run of three successive defeats in the Hong Kong Open final, threw everything he could at the Egyptian. But Ashour took the next two games to open up a 2/1 lead.

Gaultier led 10-4 in the fourth – but Ashour saved five game balls to climb back to 9-10 before the 27-year-old from Aix-en-Provence took the game to draw level.

“Greg is a great player, he’s such a great attacker you never know what he’s going to do,” Ashour toldwww.squashsite.co.uk afterwards. “He sometimes plays in patches but he always comes back so you have to be alert and that’s what I tried to do. 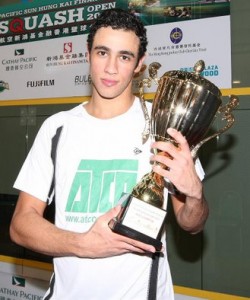 “That was a quality match – I’ll watch it over and over again to see what I did right, what I did wrong, and learn from it.

“Now I’m world number one it’s great, but we’ve still got lots of big tournaments coming up and my aim is to keep playing well and keep winning.

“But it’s a great feeling to win here at last!”

The triumph takes Ashour’s career PSA Tour title tally to 16 – one more than Matthew – yet, incredibly, is only the Egyptian’s first Super Series trophy of the year.

Whilst the win will improve his world ranking, it does nothing to better Ashour’s position in the latest PSA Super Series Rankings, which are headed by Matthew, on 365 points, with Ashour in second place, ahead of third-placed EnglishmanJames Willstrop. The only change in the top eight is the two-place rise by England’s Peter Barker (Matthew’s quarter-final conqueror) to eighth place.