World number one Ramy Ashour fought back from two games down in “the toughest match I’ve ever played” to overcome Egyptian compatriot Amr Shabana to reach the semi-finals of the Kuwait PSA Cup, the third PSA World Series squash event of the year at the Qadsia Sporting Club in Kuwait. 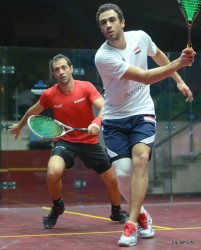 The victory extends Ashour’s remarkable record to 34 unbeaten matches in a row – an undefeated run unparalleled since the days of Pakistan legends Jansher Khan and Jahangir Khan.

It was a lacklustre performance in the first two games as 25-year-old Ashour, the reigning world champion, seemed out-of-sorts – while Shabana, the 33-year-old four-time world champion, looked to be heading to the first victory over his younger compatriot for more than two years.

Shabana led 5-3 in the third, but Ashour – who had stayed on court after the second to continue practising – slowly began to rediscover the form which had seen him reach the finals in his last nine Tour events and win six titles in a row!

As Shabana became more distracted by refereeing decisions which went against him, so Ashour took command – and after 73 minutes celebrated an unlikely 9-11, 2-11, 11-8, 11-5, 11-4 victory and a place in the last four.

“He is an amazing player – I don’t think I’ll be able to play like that when I am 33,” said Ashour of his opponent afterwards. “I’m glad I kept up with him.

“This should have been the final – a double final in fact.

“It’s the toughest and best match I’ve ever played,” added the world No1. “And I’m glad I didn’t have any injuries.

“I need a very good recovery for my match tomorrow.” 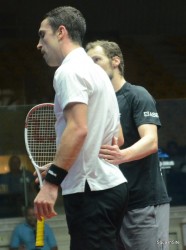 For a place in his tenth final in a row, Ashour will face French rival Gregory Gaultier, the No4 seed who spent almost a quarter of the length of Ashour’s match to earn his place in the last four.

It was clear that all was not well with opponent Peter Barker, the No8 seed from England. Struggling with his movement, Barker lasted two games before offering his hand to Gaultier after 19 minutes, with the score standing at 11-3, 11-2.

“I could see from my first boast that he was struggling,” Gaultier told the event website www.kuwaitpsacup.com later. “I asked him if he was OK to carry on, which he did for two games but he was right to stop – any more time on court and he could have done some lasting damage.”

There will also be Egyptian interest in the other semi-final where Mohamed El Shorbagy, the sixth seed from Alexandria, will face third seed James Willstrop, the defending champion from England. 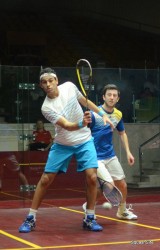 But Selby stretched the Egyptian to eight-all in the third before Shorbagy pulled away to close out the match 11-4, 11-4, 11-9.

“It’s just like last year here, when I saved a match-ball in the first round and did really well,” said El Shorbagy, the UK-based world No5. “This time I saved four in my first match and now I’m in the semi-finals again, I can’t believe it!

“Of course I’m very happy with the way I played, it’s my best performance of the event,” he added. “I’m happy I won the third because I could feel I was starting to fall into his rhythm.” 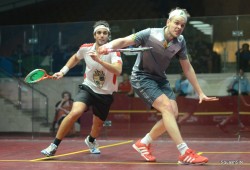 Willstrop renewed his rivalry with fifth seed Karim Darwish, the Egyptian whom he first met on the Tour in February 2003 and has since played a total of 22 times, winning on 17 occasions.

In a repeat of the 2011 Kuwait PSA Cup final, Willstrop won a close first game then stretched the lead to two before fellow former world number one Darwish struck back to take the third to reduce the deficit.

“The intensity was up there tonight, one of the top matches, with truly severe intensity,” said Willstrop later. “I think I did well to take the first, but Karim played at his best today.

“Whatever his problem was, it’s now sorted because he was moving very well, hitting the ball very well, and you could see he was really up for it.” 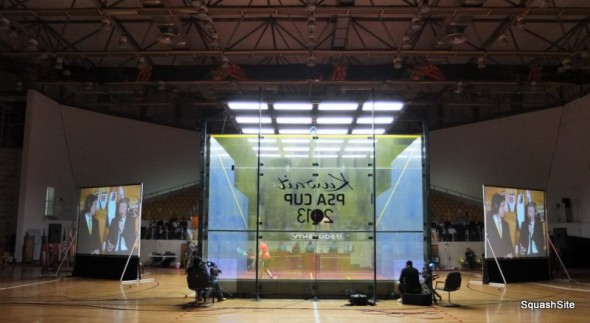