England’s Tom Richards caused the biggest upset so far in the CSR Viridian Australian Open when he outlasted fellow countryman Daryl Selby in five games in today’s (Wednesday) second day of first round action in the $142,500 PSA World Tour squash event in Canberra – the fourth PSA Super Series championship of the year.

Richards was handed the marathon match in dramatic fashion when Selby, the ninth seed, conceded the point on match ball when his drop shot hit the tin and the referees called the ball good.

Selby immediately indicated the ball had fallen short to give his opponent the 8-11, 11-5, 12-10, 8-11, 11-8 victory. The 24-year-old Richards later said the win over his English Premier League St George’s Club team-mate was the best of his career.

“That really shows his class,” said Richards after his shock 93-minute win. “He’s one of the fairest, if not the fairest, player on tour – it’s a pleasure to play against someone like him.”

“I feel like I’ve been pushing the top 10 guys last season. I did a hard summer’s training and now I feel like I can really compete with them.” 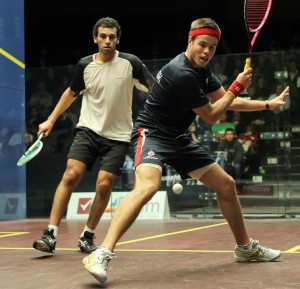 Brisbane’s Zac Alexander looked like causing another shock when he took the opening game against 14th seed Mohamed El Shorbagy.

But El Shorbagy, playing in his first PSA Super Series event of the year, fought back to equal the contest and then just managed to win the crucial points to take the match 6-11, 11-6, 12-10, 11-8.

“I’d never seen him play before and he really surprised me,” El Shorbagy said. “I didn’t know what he was going to do but he played at a really fast pace so I had to find a Plan B and I tried to slow it down.

“The first match is always the hardest to find you rhythm and I am very pleased to have won it.”

There were no such worries for France’s former world number one Gregory Gaultier, who demolished Muhd Asyraf Azan of Malaysia 11-7, 11-2, 11-2, or fourth-seeded Egyptian Karim Darwish, an 11-9, 11-4, 11-7 winner over New Zealand’s Campbell Grayson. 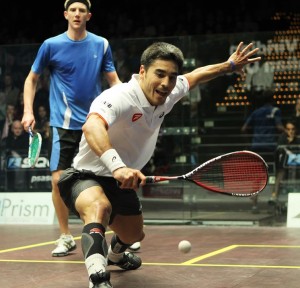 Boswell played superbly to win the first game but the world number seven lifted several gears thereafter and eased away with the match 7-11, 11-6, 11-9, 11-5.

Both players provided a host of entertainment in a high quality match but Lincou just shaded Boswell with his movement around the court and his deft touch at the front.

“Thierry was just too good,” Boswell conceded. “After the first game he started putting the ball in the corners  I played well in the first game but then he found something else.”

The 31-year-old Boswell said he was disappointed he hadn’t been able to give the big home crowd the win they were cheering for.

“I never thought that a tournament like this would happen in my home town during my squash life,” he said.

“I’ve never played a first round match like this with so many people supporting me. I just wish I was coming back for the second round.” 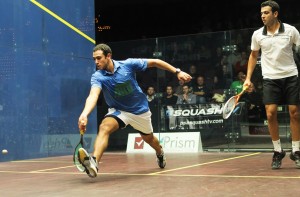 “We’re both tall men but we move around the court well and it’s always very fair,” said the 16th seeded Pilley. “It was a good solid hit out to start the tournament, but against Ramy Ashour I’ll have to lift it several levels for the next round.”

The second-seeded Ashour reached the second round with a brilliant display of attacking squash against fellow EgyptianOmar Abdel Aziz.

Ashour was in total control throughout as he cantered to an 11-4, 11-5, 11-8 win, even giving his opponent one of his own rackets after Aziz had broken strings in the three rackets he had with him.

“I’m feeling better as the week goes on and I get over my jetlag,” said the 22-year-old from Cairo. “Maybe if I make the final my body clock will be back to normal by then.”