English qualifier Tom Richards advanced to the second round of the JP Morgan Tournament of Champions after eliminating Malaysia’s world No21 Ong Beng Hee in straight games in the first round of the first PSA World Series squash event of the year at Grand Central Terminal in New York.

The unassuming 24-year-old from Surrey secured the first game without too much difficulty. Although pushed to a tie-break in the second and third games by the more experienced Malaysian – who had defeated Richards in their prior two outings – the English outsider remained calm en-route to securing his 11-6, 12-10, 12-10 victory. 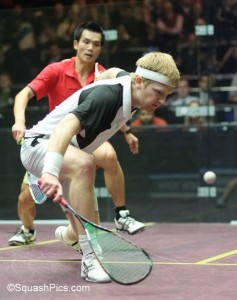 “Our other matches were close, so I knew I had a shot to win today,” said Richards after the match. Although it was his first time on the iconic glass court in Grand Central Terminal, Richards was remarkably composed. “I was a little bit nervous, which is a good sign for me,” he added.

Richard was most surprised by the size of the mid-afternoon crowd: “Having a full crowd for a first round match like we had today is pretty amazing,” he explained. “It really helped lift my game.”

Richards will next face the oldest player in the draw, David Palmer, the 34-year-old from Australia who has played in every Tournament of Champions since it was first staged in Grand Central Terminal in 1995. Palmer eliminated Julian Illingworth, the lone American in the draw. With the crowd enthusiastically applauding every point, the 24-year-old from New York drew even with his seasoned opponent at nine-all in the third game, but the veteran shut the door on the match by winning the next two points.

The evening prior to his Tournament of Champions debut, 20-year-old Mohamed El Shorbagy was recognised as the 2010 PSA Young Player of the Year at the World Squash Awards. El Shorbagy, who had been unable to compete in theTournament of Champions in prior years because the tournament dates conflicted with school exams, made sure to finish his University exams a week early this year so he could make it to New York City for the tournament so revered by the players.

The young Egyptian lived up to his award-winning status in his 11-8, 11-8, 12-10 first round win over the more experienced Malaysian Mohd Azlan Iskandar.

“I was really excited to be playing my first match here in Grand Central and in the first game I was trying to hit a lot of winners to please the crowd,” the fast-talking El Shorbagy said after the match. “Then I realised I needed to focus and vary the pace.” Like his fellow Tournament of Champions rookie Richards, El Shorbagy was amazed by the capacity crowd at his evening match. “You never see a crowd like this at a first round match,” he said. “It makes a player want to be his very best.” 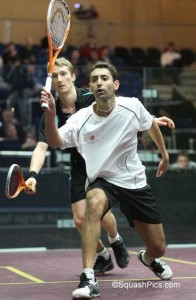 El Shorbagy will next play his good friend Shahier Razik. The Cairo-born 33-year-old Canadian needed five games to overcome English qualifier Chris Ryder to make it to the second round. The two had never met in competition before. “I am always a little nervous playing someone I have never played, because you don’t know quite what to expect,” said Razik.

“I started pretty well and thought I was going to make it through, but then Chris changed his game and I didn’t adjust right away.”

After his 11-6, 6-11, 8-11, 11-7, 11-5 win, the veteran Canadian reflected on the appeal of the JP Morgan Tournament of Champions for the players. “The Grand Central venue, which is amazing, stays the same, but every year the tournament gets bigger and better,” Razik said. “There is always a big build up to this event for the players starting in December; as we go on our December holiday break, everyone says ‘I’ll see you at the ToC.'”

Defending champion James Willstrop limited his time on court in his first round match against fellow Englishman Jonathan Kemp to just under 30 minutes. It was a commanding performance by the 27-year-old; he did not fall behind in the entire match, winning 11-5, 11-7, 11-5.

“My dad has said that you are most likely to perform well in the places in which you are most comfortable,” said Willstrop, who is coached by his father Malcolm, after the match. “That is certainly true for me here at the Tournament of Champions. Coming here is special, even more so this year after having won last year.” 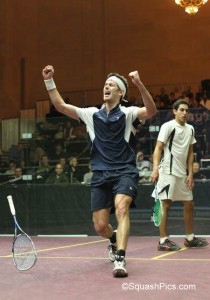 Willstrop’s next opponent Borja Golan must be feeling comfortable in New York City. After winning two qualifying matches to make it into the main draw, the Spaniard defeated fellow qualifier Tarek Momen 11-9, 11-7, 11-8. “I have never won so many matches in New York City,” the exuberant Golan said after the match.

Although Momen took an early lead in all three games, Golan caught up to tie the score at the midway mark of each. The players exchanged the lead over the next few points in each game until Golan surged ahead to secure victory.

Australian Stewart Boswell and India’s Saurav Ghosal played the first and the longest match of the opening day of play. Boswell won the first game by a five point margin after which the 24-year-old Ghosal jumped out to a 6-1 lead in the second. The 32-year-old Aussie surged back to secure the game 11-8.

Boswell was unable to convert two game balls in the third, which was tallied 16-14 in Ghosal’s favour. The fourth was all Boswell, who took the lead at 2/1 and then didn’t relinquish it, winning the game 11-5 to seal the match after 70 minutes of play. The veteran Australian was pleased with the victory. “For as long as I play squash, I want to be here at theTournament of Champions and make the most of it.”

Boswell will face top-seeded Ramy Ashour in the second round. The 23-year-old Egyptian defeated 34-year-old Olli Tuominen of Finland in straight games. “It was a good first round match,” Ashour said, “It was a balanced test – not too easy and not too hard.”

The 2008 titleholder was determined be playing for the 2011 title, despite some injuries in the latter part of last year. “I am really excited to be here,” he said. “I did not want to miss this tournament.” The prodigiously talented Ashour even put a positive spin on his recent injuries. “Being injured has had some advantages,” he noted. “It has made me more mature on court and it has put me in touch with how to really take care of my body.” 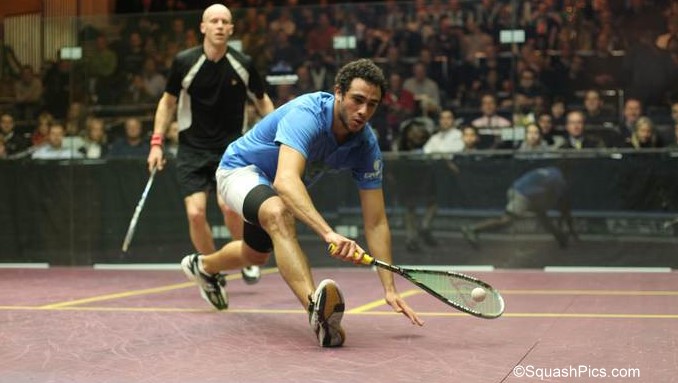