Colombian World No.14 Miguel Angel Rodriguez will be aiming to prevent an all-English final in the 2014 Canary Wharf Classic after booking his place to face Sheffield’s Nick Matthew in the semi-finals. 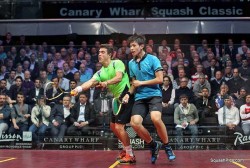 Rodriguez came through a tough and testing encounter with Hong Kong’s Max Lee, who beat former World No.1 Karim Darwish in the first round, in the quarter-finals and will take on Matthew as the only remaining non-Englishman in the draw.

Rodriguez, the highest ranked South American player of all-time, was forced to fight for every point in the 68-minute match-up and his tenacity and determination paid off as he came from 7-1 down in the fourth game to force a tie-break which he eventually edged to take the match 11-9, 7-11, 11-6, 12-10.

“That was one of the toughest matches of the year for me,” said Rodriguez. “I had to be very strong both mentally and physically.

“Max had a great performance against Darwish two days ago in the biggest win of his career and he showed he can be at the top and I had to dig in.

“In the fourth game I had to be very patient and I changed my strategy and thankfully it worked. 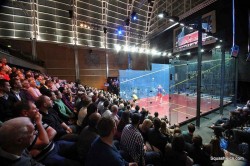 “We train together in Orlando and we know each others game’s and each others weaknesses,” he added. “But I am glad I could win this match as it was very important for me as it will help me improve a little in the rankings

“The most important thing is that I show my strengths and talents on court and I’m looking forward to the semi-final tomorrow.”

Matthew, the event No.1 seed, earned his spot in his fifth consecutive Canary Wharf semi-final by beating Egyptian Omar Mossad 3-0 while No.2 seed James Willstrop eased into the semi-finals with a 3-0 win over Daryl Selby. 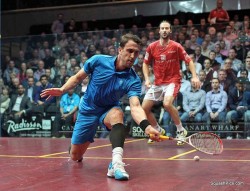 Peter Barker made it a triumvirate of English hopes in the semi-finals after coming through a tense affair with German national champion Simon Rosner and he will take on Willstrop for a place in the final.

“That was a really tough match against Simon and I knew it was going to be,” said Barker.

“I lost to him last time we played so I’m really pleased to get through. I have had a tough draw but I’m just taking it one match at a time – it wasn’t a vintage performance but I’m happy to be coming back tomorrow.

“James is a class player but my only win against him came on this court so that’s a boost. I’m on home turf as well so hopefully the crowd can get behind me and I’m looking forward to the match.” 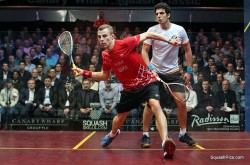 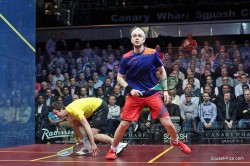