Colombian qualifier Miguel Angel Rodriguez upended Hisham Mohamed Ashour in a hard-fought five-game thriller on the second day of first round play in the JP Morgan Tournament of Champions to secure a surprise place in the last 16 of the first PSA World Series squash event of the year at Grand Central Terminal in New York. 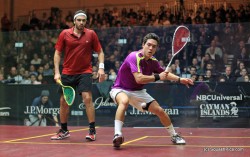 The 26-year-old from Bogota was a whirling dervish on court, using his extraordinary speed to cover every corner of the court. Egyptian Ashour was bold and boisterous. The standing room only crowd in Vanderbilt Hall in Grand Central was captivated.

Rodriguez won the first game 11-7, but world No14 Ashour stepped up with a mix of power and shot-making to win the next two 11-9 and 11-8. The momentum shifted back to the South American, ranked 19 places lower, as he drew level by winning the fourth game 11-5. 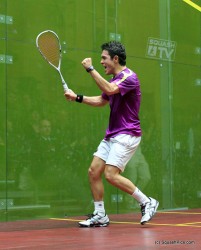 Ashour surged ahead in the fifth, 4-2 and 7-4, but Rodriguez was determined and tied the game at seven all, at which point it was anyone’s match. “At seven all I said to myself, ‘I am not tired, I am not injured, I can get to all the balls’,” shared Rodriguez after the match.

Rodriguez flung himself at balls that seemed ungettable until he got his racquet on them. Ashour responded by hitting length followed by drops, followed by lobs, and led again at 9-8. But in the end Rodriguez got to more balls and won the match 11-9 after 75 minutes. 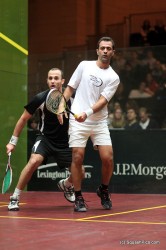 Shabana has enjoyed a recent run of exceptionally fine play on a par with his days at the top of the world rankings. “I know I am just as god as anyone on the PSA Tour,” said the 32-year-old veteran post-match. “But now every day it is about wanting to play.”

Shabana’s desire was evident as he moved Reda to the back of the court with crisp shots, forcing a defensive response that provided the opening to hit a winner. Shabana punctuated match ball with a bit of flair as he did a double pump fake before dropping the ball to the left front corner to claim his place in the second round. 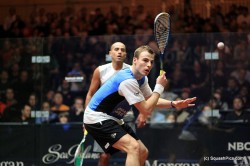 In the day’s opening match, top seed Nick Matthew looked strong and fit as he defeated Wael El Hindi in four games. “I played well for two and a half games,” the Englishman said. “Midway through the third, it got a bit scrappy and I lost my concentration.”

Matthew’s countryman Peter Barker walked by as Matthew offered this self-assessment and reassured his friend that “it’s good to have a little rough going now because you’ll be better prepared for the later rounds.” This is especially true for the former world No1 who was forced to take a break from squash at year-end due to injury.

Matthew’s next opponent is compatriot Adrian Grant, his Commonwealth Games Pairs gold medal-winning partner. The left-hander from London survived a strong showing by qualifier Alan Clyne of Scotland who nabbed the second game before succumbing to Grant after 83 minutes. 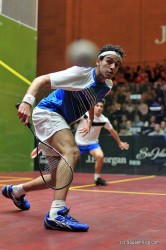 Mohamed El Shorbagy, the 21-year-old older brother of yesterday’s giant killer Marwan El Shorbagy, defeated Pakistan’s Aamir Atlas Khan in four games. “It is good to be able to win even when you are not playing your best,” was El Shorbagy senior’s philosophical assessment of his own play.

Khan, who feels strongly about reviving Pakistan’s standing in the squash community, could not maintain the early leads he established in the first and third games, ultimately yielding to El Shorbagy’s all-around attacking game.

The world No6 from Alexandria next plays the hard-hitting Australian Cameron Pilley who ousted Finland’s Olli Tuominenin three games.

Gregory Gaultier, the tournament’s third seed and the 2009 titleholder, moves into the second round with a straight games victory over Spaniard Borja Golan Santin. His opponent will be Switzerland’s Nicolas Mueller who defeated qualifier Stephen Coppinger of South Africa in four games.