Satomi Watanabe wrote her name into squash history today after beating US opponent Marina Stefanoni in the women’s quarter-finals of the WSF World Junior Squash Championships in New Zealand to become the first ever Japanese player to reach the men’s or women’s semi-finals of the prestigious World Squash Federation championship. 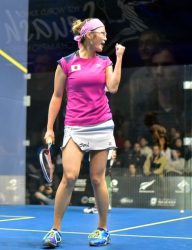 Seeded to reach the last eight at the Queen Elizabeth Youth Centre in Tauranga, the 18-year-old from Yokohama was making her fifth and final appearance in the championship after making her debut in 2012 as a 13-year-old.

“I’m so happy to make the top four in the world for the first time,” said the jubilant Japanese juvenile. “I didn’t start well, 7-10 down in the first two games, and I didn’t think I could do it, she’s so good and so young.

“But I told myself that this is my last worlds and I had to make it, and I did so I’m really happy!” 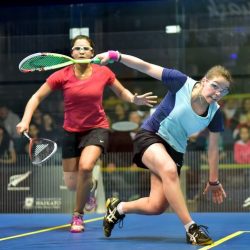 “We have the utmost respect for each other, which makes it more special for whoever wins,” explained the delighted Yousry, a 17-year-old from Cairo. “We always have close matches, even today it was three-nil but so close, it depends who needs it more – it was Zeina in the British, today I just had the edge.

“My aim today was to just go out and enjoy it, and I did! It was getting a bit nervy in the third, I was 6-2 and 10-7 up but we both play better when we’re down. I was so glad when the referee called a stroke on the final point!” 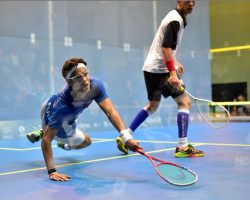 Youssef Ibrahim ensured that there will be Egyptian representation in the final of the men’s championship for the 12th year in a row after beating rising US star Andrew Douglas.

But it took the 18-year-old top seed from Cairo – ranked 121 in the world – 53 minutes and five games to overcome Douglas and deny the 18-year-old from New York the chance to be the first ever US player to reach the event’s last four. 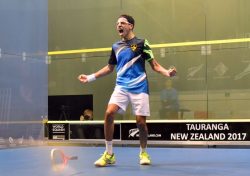 “So much pressure, I was winning comfortably then it became so tense,” said Ibrahim after his victory. “I’m looking forward to playing a friend tomorrow!”

There was delight too in the French camp when Victor Crouin won his match in straight games to become the country’s first male semi-finalist since his illustrious compatriot Gregory Gaultier, currently the world number one, reached the final in 2000. 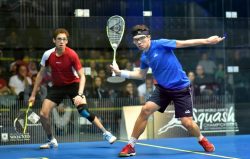 “I’m pleased to make the semis for the first time – as a 3/4 seed, that was my minimum target,” said Crouin (pictured above, right, in quarter-final action). I didn’t feel any pressure, I just wanted to play my game and I was quite happy with how I played. Now I hope the others have a brutal battle!” 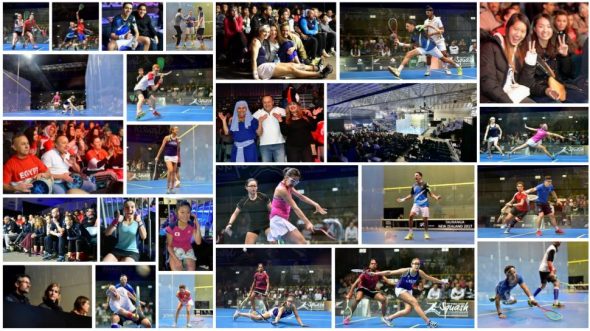