On a dramatic day of second round action the women’s Hong Kong Open lost three of its top seeds but gained a home quarter-finalist for the first time ever, not once but twice … 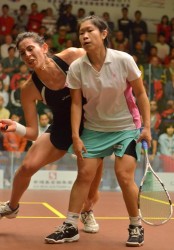 The opening women’s match of the day brought exactly what the packed crowd at the Hong Kong Squash Centre wanted, a win for local favourite Annie Au.

The diminutive Annie utilised her experience on this court and her delicate shot making skills to good effect, only in the second game did New Zealand’s Joelle King manage to get on top.

It was the Hong Kong girl who got the better of the three close games though, despite the match being over physical at times with Au receiving a conduct warning for blocking and being on the floor several times as King tried to get past.

The third was crucial as King missed a volley drop which would have given her game ball, and she was always playing catch-up in the fourth. 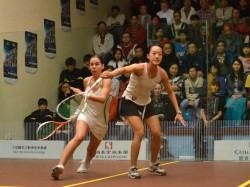 If the crowd were delighted by the first match, they were stunned by the second as Malaysia’s 13th seed Low Wee Wern sent world number two Jenny Duncalf crashing out 11/7, 11/7, 11/1.

“Jenny wasn’t 100%, I know she’s not been well over the last couple of days,” said Wee Wern. “The first two games were close then I got a good lead in the third, I knew I had to keep on pressing as Jenny has all the experience and even at 7/0 I couldn’t afford to relax.

“It’s good to be able to carry on my good form from in the worlds last week, it’s the last tournament of the year, so come on !!!”

Losing one top seed is careless, losing two would be, well, sensational, but Rachael Grinham managed to sneak home against Jaclyn Hawkes on the upstairs courts.

“I got a good start but then from 4-all in the second she just ran away with it,” said the Australian third seed.

“I was trying to make her run but was taking it in short too much and she was just feeding off it, so I had to change game plan and keep it at the back more.”

That change of tactics did the trick, but a lead of 9/4 in the fifth was seriously threatened as the Kiwi refused to go quietly.

“She never gives in, so I knew I had to keep on pressing, but in your mind you think you’ve got it won so it’s difficult when she starts coming back, in the end I was just grateful to get to 10-8 rather than 9-all, that would have made it very difficult.”

“She’s always one of the most difficult to play,” admitted Grinham, “it’s tough to get any rallies going as she’ll chop it in as soon as she can – if she wants to chop it into the tin that’s fine of course!

“It should be good playing with a big crowd, that doesn’t get to me at all and for her it might help or it might make her nervous. We’ve played a couple of times this year and won one each so we’ll see how it goes.”

“I was able to play the right game at the crucial times,” said the French number one. She’s a very spirited player, but I think I was able to make her work hard, to grind her physically, as in the third, I could see she was struggling to pick up my attacks.

“Tomorrow, revenge time against Wee Wern: it will be a big battle!”

Madeline Perry wouldn’t choose to spend as much time at the front of the court as she did tonight, but against Raneem El Weleily on a court like this she didn’t have much choice. 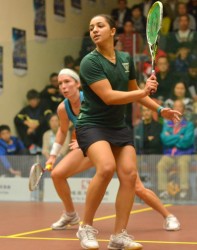 Looking cool, calm and composed, the Egyptian, who won her second world junior title here in 2007, was in charge for all but a brief spell in the third as she produced a second major, if not entirely unexpected, upset of the day in the women’s draw.

“I felt pretty calm on there tonight,” confessed El Weleily, “sometimes I can get too calm but I’m happy that I stayed composed tonight. I started to rush things a little in the third and hit a few tins but stuck with it and managed to turn it around.”

She may be going for a seventh straight HK title to go with her six World Open crowns, the first of which was won here back in 2005, but Nicol David didn’t have it all her own way against Donna Urquhart today.

The tall Australian stuck with David until 6-all in the first, fell behind early in the second but then extended a close third game, even getting a game ball at 11/10, but eventually the relentless pressure that Nicol exerts paid dividends as she went through 11/6, 11/7, 14/12.

David’s quarter-final opponent will be England’s Laura Massaro, who was in no mood to become another seeded casualty as she eased past Delia Arnold  11/5, 11/3, 11/5, leaving the court 9 stage free for the final act as Hong Kong’s Joey Chan aimed to join Annie Au in the quarters, and how she rose to the challenge.

The 23-year-old who won the Macau Open just days ago looked supercharged on court, and the pace and accuracy she showed proved too much for sixth seed Kasey Brown as the Australian went down 11/8, 11/5, 11/8 in just under half an hour to the delight of the packed crowd.

“It’s definitely my best ever win,” said a delighted Joey, “and it’s fantastic to reach the quarter-finals along with Annie. The pressure was all on Kasey and I could sense she wasn’t moving as well as she can so I kept going for my shots and it worked.” 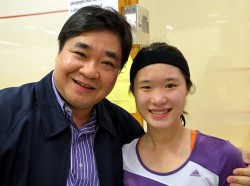 “To have two players in the quarter-finals for the first time, this is payback for some of the work we’ve put in over the last 10 to 15 years.

“It just goes to show that if you want to progress at the world level you have to have the commitment – Annie and Joey have been full time for three years now, and this is Joey’s first big breakthrough, we’re all delighted for her.”

So, the second and fourth seeds are out, but the big story is that not only does Hong Kong have its first ever women’s quarter-finalist … it has two of them! 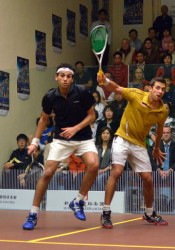 Malaysia’s Mohd Azlan Iskandar produced the upset of the day in today’s second round of the Cathay Pacific Sun Hung Kai Financial Hong Kong Open when he downed in-form Egyptian Mohamed El Shorbagy, the No7 seed, to secure an unexpected place in the quarter-finals of the seventh PSA World Series squash event of the year.

El Shorbagy, the 20-year-old world No8 from Alexandria, arrived in Hong Kong fresh from title success in last week’s PSA International 50 Macau Open. The Egyptian, who went into the match 3/0 ahead in his head-to-head tally with Iskandar, took the opening game.

And there will be a surprise Australian name in the last eight line-up after unseeded Stewart Boswell beat England’s Tom Richards 11-4, 11-9, 11-0 in 42 minutes.

The 33-year-old former world No4 from Canberra is enjoying some of the best form of his recent career: After previously making the last eight of a PSA World Series event in January 2008, Boswell burst through to the semi-finals of last month’sQatar Classic – and now, after making his Hong Kong breakthrough by beating No8 seed Thierry Lincou in the opening round, is through to his second successive quarter-final.

“When I looked at the draw, I didn’t think I was that lucky, but it turned out to be good after all,” Boswell toldwww.squashsite.com afterwards. “I think I was again a bit lucky, like I was in Qatar. But then, yet again, I still had to play my best squash to win today.”

In Lincou’s unexpected absence, French interest in the quarter-finals will be led by fifth seed Gregory Gaultier, the recent Qatar Classic champion who was stretched to four games before overcoming Egypt’s Omar Mosaad 11-6, 4-11, 11-4, 11-6. 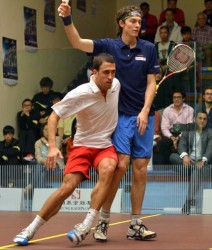 The day otherwise belonged to Englishmen and Egyptians – with England team-mates Nick Matthew, Peter Barker andJames Willstrop coming through in the top half of the draw, and Cairo compatriots Amr Shabana and Karim Darwishprevailing in the other half.

Barker continues to be the most consistent performer in the 2011 PSA World Series by claiming his seventh quarter-final berth in a row. In a repeat of his victory over Cameron Pilley in the World Open earlier in the month, the London left-hander again despatched the Australian in straight games, winning 11-8, 11-7, 11-4 in 47 minutes.

“After my first round I had to be more ruthless,” said the sixth seed. “And I think that tactically, I played well today. In Rotterdam, the court suited me better, and it was easier for me. But today, the court was more suited to his game, in particular his forehand, and I had to be prepared to be more proactive. And I was.

“I’m really happy with the way I played. I was trying to frustrate him, and only he can say if I succeeded, but I’m happy with what I implanted.”

“I enjoyed my match today,” said Selby later on Twitter. “Not the losing part but the running around like a maniac part. Disappointed, but Nick Matthew was a warrior!”

Willstrop eased into his sixth World Series quarter-final of the year after defeating Finland’s Olli Tuominen 11-3, 11-8, 11-6.