More than two years after beating his England team-mate for the first time on the PSA World Tour, world No15 Daryl Selby produced his second upset over world number two Nick Matthew in the same country when he powered to a straight games win in the third round of the Kuwait PSA Cup, the third PSA World Series squash event of the year at the Qadsia Sporting Club in Kuwait. 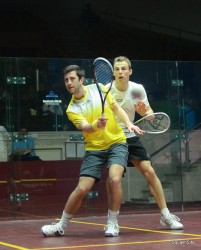 It was a confident performance by 30-year-old Selby against an uncharacteristically error-prone Matthew – who later admitted he felt ‘flat’ throughout the match. After taking the first two games comfortably, Selby finally clinched victory on his second match-ball at the end of a tense third game.

“I’m usually tense when I play Nick, but today I wanted to go on court and be relaxed and just enjoy the game – and it worked,” said a delighted Selby, now in his first World Series quarter-final for more than a year.

Selby, the 13th seed, will take his chance against sixth seed Mohamed El Shorbagy in a repeat of their third round meeting in the inaugural Kuwait PSA Cup in 2011. The 22-year-old world No5 from Egypt despatched veteran Malaysian Ong Beng Hee 11-7, 11-6, 13-11 in the final match of the day.

“Today I was more relaxed on court, more focused on the squash, on the job to do, and on nothing else,” Shorbagy told the event website www.kuwaitpsacup.com later. “He had a good lead in the third, I lost a bit of focus, but I really gave it a big push – I really didn’t want to play another game tonight.” 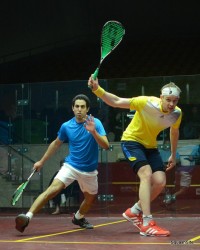 “We played in New York a few weeks ago, and I just managed to get through,” recalled Willstrop of his previous clash with Momen, now ranked 11 in the world. “It was a tough battle, so beating somebody of his calibre 3/0, I couldn’t be more pleased.”

Darwish, looking for his first Tour win over Willstrop since November 2006, has much admiration for the 29-year-old from Leeds. “What can you say about James – he is one of the most talented players there is. I will have to have my basic game well in place tomorrow before thinking of going for shots.”

A sparkling all-Egyptian clash stands out in the quarter-final line-up where reigning world champion Ramy Ashour will take on the four-time world champion Amr Shabana. 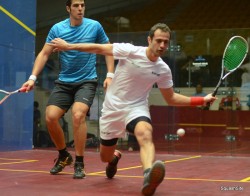 Shabana, the 33-year-old seventh seed, faced ninth-seeded compatriot Omar Mosaad. After the first two games were shared, Shabana edged a close third game and carried that momentum into the fourth, winning 11-5, 7-11, 12-10, 11-4 in 53 minutes.

“I rarely enjoy being on court at the moment, but today, I really did,” said Shabana. “Omar has improved immensely, and that’s why he is in the top 10 now. I really enjoyed this match with him.” 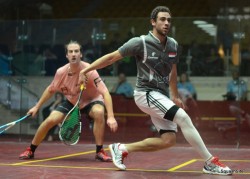 “We’ve played three times now, and every time we just battle it out, because we know that the one that is giving 100% is going to be rewarded,” said Ashour. “He is a fair player, and it’s always good to play him, he is a great character that belongs in the top ten.” 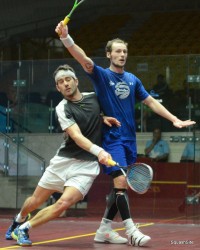 Non-Egyptian or English hopes in the event rest with Gregory Gaultier after the fourth seed from France beat top-ranked Spaniard Borja Golan 11-6, 11-3, 11-8 in 62 minutes.

“I was trying to stay accurate, not doing too much at the front,” said the victorious 30-year-old from Aix-en-Provence. “I would have liked a bit more rhythm probably, less stop start, but happy to get through in three before my match against Peter tomorrow.” 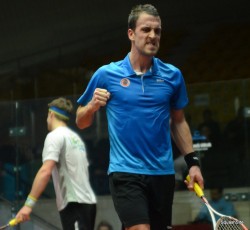 Gaultier’s next opponent is Peter Barker, the eighth seed from England who also survived a tough straight-game battle, winning 11-6, 11-4, 11-8 in 50 minutes against fellow left-hander Laurens Jan Anjema, the Dutch number one.

“I knew that it wasn’t going to work trying to compete with LJ in a power contest,” said Barker, the world No8 from London. “I just wanted to be thorough and make it as tough as I could for him, moving him to the four corners. I did that pretty well for the first two games but he came out and played well in the third, which could have gone either way.”