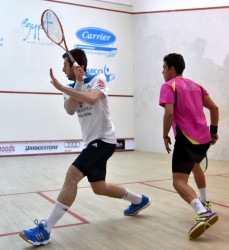 Selby, who has fallen to World No.15 in the rankings, showed incredible fighting spirit and desire to get the better of World No.5 Miguel Angel Rodriguez, the ferociously fast Colombian who has flown up the rankings so far in 2015, while Peter Barker, Nick Matthew and James Willstrop also won to cap a successful day for English hopes.

Selby was forced to come from two-games-to-one down in order to prevail against Rodriguez in a thrilling 105-minute encounter that earned him a place against French World No.3 Gregory Gaultier in the last eight, with the Frenchman the only non-English or Egyptian player left standing. 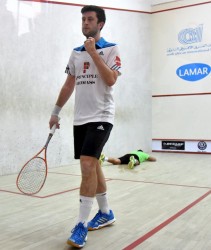 “I had really tough hard fought match yesterday against Nicolas Mueller and today was another really tough match,” said Selby.

“Miguel has improved so much recently and he’s fully deserving of being a top 5 ranked player so for me that’s a big win as he is one of the best players around at the moment.

“I’ve been playing better and better recently and I’m proving to myself that I still have what it takes and that I can still play at the very top level so today was very pleasing and I’m looking forward to coming back tomorrow.”

Gaultier eased past Karim Abdel Gawad to book his place in the quarters while the Egyptian trio of defending champion Ramy Ashour, World No.1 Mohamed Elshorbagy and World No.9 Omar Mosaad ensured the home fans will have plenty to cheer in the quarter-finals. 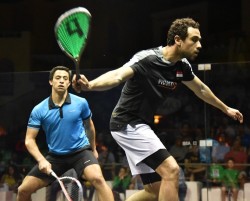 Ashour, who has missed the last four months through injury, was forced to come from one-game down against talented compatriot Fares Dessouki in order to keep his hopes of retaining the title alive.

“I was expecting him to come out fighting and I knew it would be tough,” said Ashour.

“He’s a very smart and explosive player and he’s hard to play but i think I did well today and it’s just great to be back and to be competing with all these amazing athletes on the tour.”

El Gouna International - Round One