Serme Claims Historic 2016 US Open Crown as ElShorbagy doubles up 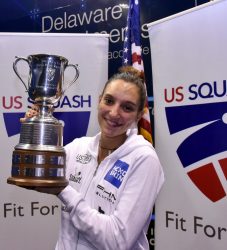 Serme bowed out of her last tournament, September’s Al-Ahram Open, with a whimper in the first round as she struggled for form but has turned her season around, producing a series of spellbinding performances to defeat World No.2 Laura Massaro, World No.6 Amanda Sobhy and World Champion El Sherbini to secure the win – in what was only her third ever PSA World Series tournament final. 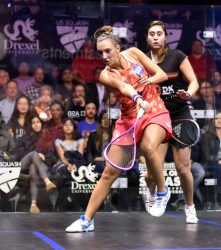 After sharing the opening two games it was Serme who came through a crucial third game, coming from 0-4 down to take it in a tense tie-break courtesy of some sublime dropshot winners, and she continued to play with pinpoint precision and accuracy to come through in four games and seal an unexpected triumph.

“I cannot believe it,” said Serme.

“Two weeks ago I lost in the first round of the Al Ahram Open and was so far away from this. If someone had told me then I’d win the US Open I’d have laughed – so to now be the champion is crazy. I’m so, so happy! 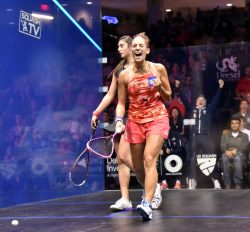 “Today was a very difficult test. She’s not No.1 for nothing – it’s crazy because I felt like I was behind all the time. I just kept pushing and telling myself that I can do it.

“I had to trust in myself and be attacking. I knew I had the right tactics so I just had to keep believing. It’s one of the biggest victories of my career without a doubt.”

Speaking after the match El Sherbini said: “I gave it my all but she was the better player today and she deserved to win.” 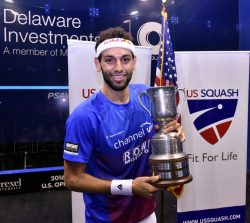 In the Men’s final World No.1 Mohamed ElShorbagy put his name on the trophy for the second time in his career – adding to his 2014 triumph – after injury once again brought a potentially epic encounter with Nick Matthew to a premature end as the 36-year-old Englishman was forced to retire in the fifth game of their title decider inside Philadelphia’s Drexel University. 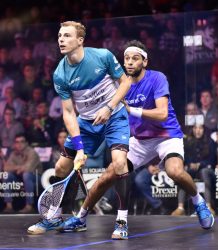 It marked the third time that Matthew has been forced to retire during major encounters with ElShorbagy inside the past 18 months – with injury also thwarting the Yorkshireman during the 2015 El Gouna International and 2016 Windy City Open – bringing to an end what, for 50 minutes, was shaping up to be one of the best matches of the season.

Matthew started brighter and managed to control the play to open up a 2-0 lead after two punishing games but a hamstring injury suffered during a lengthy exchange took its toll as the Wolf began to break down, resulting with a handshake midway through the fifth game. 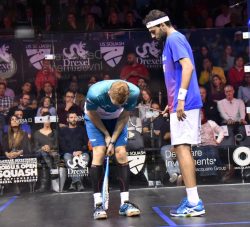 “I have great memories here, two years when I won it got me to the top of the rankings and whenever I’m back I just feel really happy to be here,” said ElShorbagy – who also goes top of the PSA Road To Dubai Standings courtesy of the win.

“I grew up watching Nick playing and he comes from a golden generation. For me, he’s the greatest out of all of them. He’s raised the bar for everyone and I’ve watched that and learned from that, and every time I was coming close to that bar, he would push it even further. 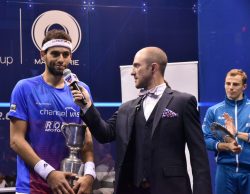 After the match Matthew said: “This week was about more than squash for me.

“I haven’t won the tournament but I’ve won my squash back – on and off court I’ve found a method to enjoy the game again and play with a smile on my face.

“Ultimately my body just let me down at the end. My mind was in the game and I was enjoying it. I love being on this stage and I was a winner this week regardless of tonight.” 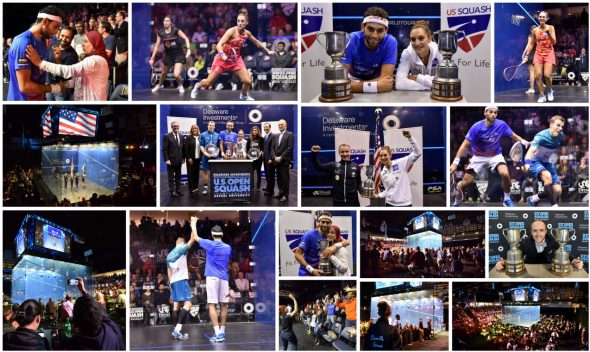