The opening match on the penultimate day of the eighth PSA Super Series event of the year at Green Island saw third seed Shabana, winner of the World Open title on the same court almost 12 months ago, take on career-long French rivalGregory Gaultier, the fifth seed. 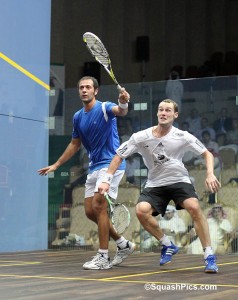 In a match he later described as “probably the hardest I ever played in my life”, Shabana won a closely-contested first game, in which the Frenchman saved one game-ball.

It seemed clear that the unusually hot conditions began to take its toll on Gaultier in the second game – and, after taking a three-minute injury break midway through the third game, the Frenchman shook hands with Shabana to concede the match, with score at 11-9, 11-3, 7-5.

“I think we both raised the game today, and this first game was probably the hardest I ever played in my life – and in very hot conditions as well,” explained Shabana to www.squashsite.co.uk afterwards. “Greg pushed and pushed, until he’s got nothing left. He is a great athlete, that’s all I can say.

“We played a very good game of squash tonight, and I hope that he will be recovering soon, because we need Greg’s squash on the tour.

“I haven’t played too much squash up to now, as I was recovering from an injury,” continued the 31-year-old from Giza, now in his 38th Tour final. “I played a few matches in El Gouna, and now here.

“One thing I find when you are getting older, you don’t have to spend that much time in training, making heavy running or gym. You’ve done the work for 25 years, so the only thing you need is fine tuning and going on court playing matches.” 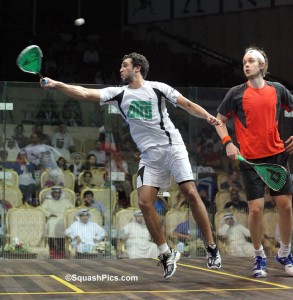 It took 82 minutes to resolve the other semi, in which England’s sixth seed James Willstrop saved a match-ball in the fourth game to force a decider before Ramy Ashour went on to clinch an 11-7, 8-11, 11-9, 10-12, 11-7 victory which takes the world number one into his 30th Tour final.

“This was hard, of course – it’s one of the toughest games I ever played. But tonight, with the crowd cheering me, I just couldn’t let them down,” said 23-year-old Ashour.

“James played perfectly – he was ready to snap every shot, every ball. He is hard to play against, you never know where he is going to put the ball.”

In looking ahead to his fourth Kuwait meeting in four years with his compatriot, Ashour added: “The toughest thing about playing Shabana is that I know his game, and he knows mine. So it’s all about mixing the game and changing my squash when I play against him.”

Willstrop reflected on the positives of the match afterwards – particularly following his 85-minute five-game upset over fourth seed Karim Darwish in the previous round. 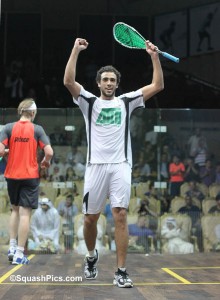 “I got Ramy to make mistakes, that’s something. Because the last times we played, he’d been on fire, and as far as I remember, he only played one backhand nick the whole match, and that’s not bad.

“I think the big match I had last night helped me relax, I mean, it was such a brutal match, I finished late, trying and sleep was a nightmare because of the adrenaline pumping. I was still up for it, of course, but not putting too much pressure on myself,” added the 27-year-old world No4 from Leeds.