Amr Shabana, the 33-year-old from Cairo who won his fourth world championship title in Kuwait four years ago, led a trio of Egyptians through to the last 16 of the Kuwait PSA Cup, the third PSA World Series squash event of the year at the Qadsia Sporting Club in Kuwait.

The seventh seed faced fellow 33-year-old Olli Tuominen – the Finnish number one who he first came up against in the British Junior U14 Open semi-finals in January 1993! 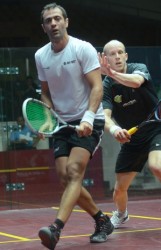 After winning 11-8, 11-8, 11-5, Shabana recalled those early days with the event website www.kuwaitpsacup.com: “It’s always difficult to play Olli – we started playing like 20, 21 years ago. I thought I was in control more or less, but he started to come back, and when he gets a sniff at it, he becomes very dangerous. Now, I’m in the next round, and we’ll see how it goes.”

Shabana will now meet fellow countryman Omar Mosaad – the No9 seed from Cairo who grabbed one of the day’s quickest wins, seeing off England’s Jonathan Kemp 11-6, 11-9, 11-9 in just 28 minutes.

And top seed Ramy Ashour started where he left off in Virginia, USA, less than a week ago by recording his 32nd straight win on the PSA World Tour. With sights on his seventh successive Tour title, the world number one beat Swiss number oneNicolas Mueller 11-7, 8-11, 11-5, 11-2.

“It’s fun to play both Nicki and Simon,” said Ashour later. “Finally I get to play players from my generation, instead of playing people 10 years older than me, and I’m enjoying it!

“You’re always aware that you can lose, and the first round is as dangerous/difficult as the quarters or the final. There is no easy match. Never.” 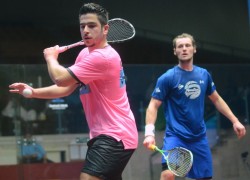 After thrilling the local crowds by upsetting higher-ranked South African Stephen Coppinger to earn a surprise place in the second round, Kuwaiti number one Abdullah Al Muzayen went down 11-9, 11-5, 11-6 to Gregory Gaultier, the fourth seed from France.

“Tonight it was far away from easy,” said Gaultier, the new world No3. “Abdullah gave it his best, but he had a massive win yesterday, and it took a lot out of him. I could see him struggling to move in the second, but he still came back strong in the third.” 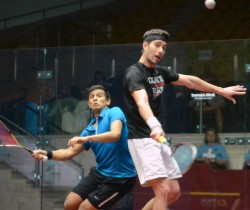 Gaultier will now meet tenth seed Borja Golan – but the top-ranked Spaniard had the narrowest escape in his earlier second round clash. India’s Saurav Ghosal took a two-game lead and looked to be in a strong position to record his first win in his fourth meeting with Golan.

“I so wanted to win that,” admitted Golan, the world No10. “It was more a mental thing in the end, at 8-4 down I just pushed and he seemed to drop a little and I took advantage.”