Two-time champion Amr Shabana and twice runner-up Nick Matthew claimed their anticipated places in the semi-finals of the 2011 JP Morgan Tournament of Champions after prevailing in the quarter-finals of the PSA World Series squash event at Grand Central Terminal in New York.

Shabana, the fourth seed from Egypt, gave his opponent Laurens Jan Anjema a lesson in the art of the sport as he moved his Dutch opponent to all four corners of the court, and then some, in his 11-7, 9-11, 11-8, 11-8 victory. 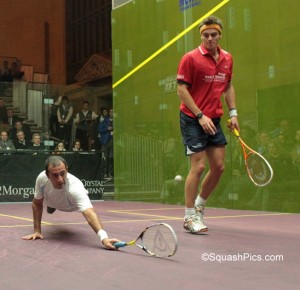 “I played my heart out,” said Anjema after the match. “But tonight you could see why Amr’s been a four-time world champion. He can attack from the most difficult positions and when you are on the receiving end, it is brutal.”

In all but the second game, the 31-year-old from Giza jumped out to an early lead, giving him a cushion of several points from which to play a controlled attacking game. Routinely throughout the match Anjema was left guessing as to which way to turn to retrieve a Shabana shot; the Egyptian’s sterling and consistent stroke technique enabled him to hold his shot until the very last moment, forcing the Dutchman to scramble for balls.

Although Anjema snared the second game 11-9, it was the Egyptian’s night from start to finish. He even offered up some theatrical humour as he fell to the court floor with an exaggerated flourish when midway through the match the strapping Dutchman’s racquet came perilously close to Shabana’s head. After the match, when asked if he was happy with the evening’s result, Shabana replied: “I am not sad.” 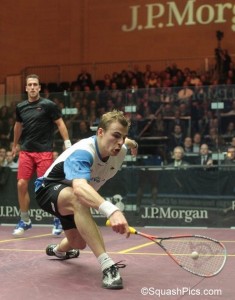 Sometime training partners and good friends Peter Barker and Nick Matthew contested the evening’s second match with current world No1 Matthew in control from start to finish. In each successive round of play at these championship, Matthew has continued to punctuate his top ranking status with strong, confident play that has left no doubt in his competitor’s minds as to his rightful position at the top of the sport.

“I thought I played OK tonight,” said Barker after the match won by his English compatriot 11-9, 11-4, 11-6. “But Nick showed why he’s world champion.” Barker went on to explain that Matthew’s attention to detail, strong work ethic and additional weapons in his squash shot-making arsenal have combined to make the Yorkshireman the top professional in the game.

While the lead exchanged hands a few times in the first game before Matthew finished it out, the next two games were all Matthew’s. In the second, the No2 seed jumped out to a 4-1 lead and allowed Barker to tally a mere four points. Barker enjoyed a momentary lead at 2-1 and 3-2 in the third, but once again the lad from Leeds took up his game a notch to win the third.

After the match when a spectator commented that Matthew made the game look easy, the wry 30-year-old replied: “Oh no. I am the one who makes the game look hard. Shabana makes it look easy.” The Matthew/Shabana showdown in the last four will be preceded by another Anglo/Egyptian semi-final clash between Ramy Ashour and James Willstrop. Both matches will be telecast live on espn3.com.