Top seeds Marwan El Shorbagy and Nour El Sherbini celebrated a notable Egyptian double in Doha today by becoming world junior squash champions for the second time – El Shorbagy winning the men’s title at the Doha WSF World Junior Championships to retain the trophy he won for the first time last year, and El Sherbini, in her third final in four years, reclaiming the U19 crown she first won in 2009 aged just 13. 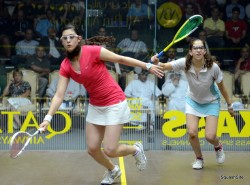 El Sherbini was more than tested for two and a half games at the Khalifa International Tennis & Squash Complex in the Qatar capital by surprise finalist Yathreb Adel – but the world number seven from Alexandria eased ahead from the middle of the third game, taking 18 of the last 20 points to clinch the title 10-12, 11-9, 11-5, 11-2 after 42 minutes.

“Finally, I’ve made it. Finally, I’m back,” El Sherbini told the event website www.wsfworldjuniors.com, alluding to the injury woes she has suffered since her historic 2009 triumph. 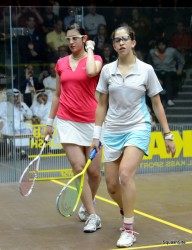 “The first game I thought we played point for point, but I’m not sure what happened at 10-8. I had game balls, but I just couldn’t finish. I was feeling a bit of pressure, about 50%, but not more,” explained the 16-year-old.

“And in the third, she was up 5-4, and suddenly, I scored several points in a row, and I thought, I’m in it, that’s it, just play your game. And I realised then that I could do it.”

The new champion was full of praise for her compatriot, a 3/4 seed who reached the final against expectations after upsetting England’s second seed Emily Whitlock in the semi-finals. 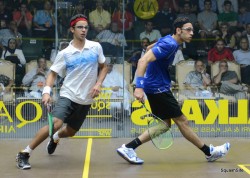 The men’s match was a repeat of the all-Egyptian 2011 final – El Shorbagy taking on close friend Mohamed Abouelghar, the No2 seed. Again, the opening games were evenly contested, El Shorbagy taking a 2/1 lead before coming back from 7-1 down in the fourth to retain his title and emulate his brother Mohamed in being a double world junior champion. 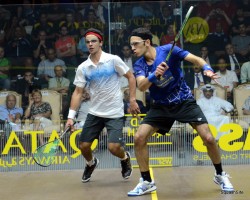 “During my preparation, I was thinking about this too much, and I didn’t win any of the matches during that time. Needless to say my confidence was very low when I arrived here. But still, I managed to keep positive the whole time.

“I had never thought growing up that I would win a U19 British Open Junior title, or a World Junior title. And here I am – with two of each! And I feel so honoured that I can add my name to the two prestigious ones that have two world junior titles, Ramy (Ashour) and my brother. It’s such an honour. 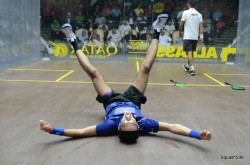 “So many people to thank, of course. My parents, of course, who have done everything for me, my Dad for coming here and supporting me. My brother, how can I thank my brother, without him, I would have never won this title.”

Mohamed El Shorbagy, winner of the title in 2008 and 2009 and now ranked eight in the world, seemed as overwhelmed by the victory as his younger brother:

“Speechless!!” he tweeted minutes after victory. “This is just one of my happiest moments ever!!! 4 World Juniors titles to the Shorbagys!!!” 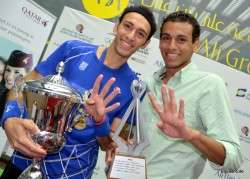 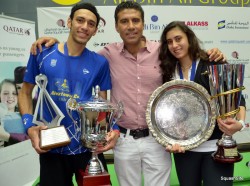 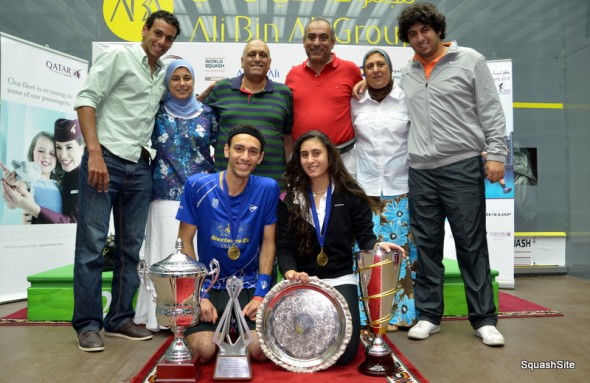 Japan march on in Doha