The Kallang Squash Centre will come to life once more on 10 November 2021 with the MARIGOLD National Squash Championships 2021, as 27 of Singapore’s top players compete in the invitational event.

Top seeds in the Men’s and Women’s draws, Samuel Kang and Au Yeong Wai Yhann, are favourites for the crown and to continue their national dominance, having won the last three consecutive editions, while talented youngster Aaron Liang will be hoping to cause an upset.

Youth vs experience in men’s draw

All eyes will be on the Men’s event this year, with SEA Games multiple gold medallist Samuel Kang leading the 16-man draw. Kang, the highest ranked Singaporean man on the PSA World Tour at World No.506, is looking to win his fifth national title.

“It’s nice to have a tournament after such a long time and I’m looking forward to competing again,” he said.

When asked who he thought would be his greatest challenge, Kang said: “It’s tough because all of us haven’t played a tournament for so long. Personally, I’m taking one match at a time. Anything can happen. Hopefully I will be able to play well and for the viewers, it will be good matches to watch.”

“I have been playing well and feeling good going into the tournament. I have no expectations for myself as I know that I’m going up against younger, fitter opponents, so I’m just hoping to do my best and enjoy competing at a high level,” he said.

Aaron Liang and Chua Man Tong are seeded joint-third and the pair will be out to spoil the party for their more senior compatriots. Chua, a PhD student at Nanyang Technological University, is seeded for a tough quarter-final draw against Timothy Leong before a potential semi-final against top seed Kang.

“I just want to keep improving on my game. It does not matter who I play. It only matters how I play. The results are just a bonus,” Chua said.

21-year-old Liang is widely regarded as one to watch this year, having recently beaten a number of his more senior compatriots in training. Finishing third last year, he has set his eyes on the title and, per seeding, could face off with Phua in a repeat of last year’s semi-final.

When asked about his game plan to win, Liang said: “I have an edge in terms of fitness and age. One thing I have been working on the past year is my strategy and shot quality. Learning from my match against Marcus last year, he played really well and he basically showed me how a senior player should play. There were a lot of good lessons there.”

In the women’s event, Au Yeong Wai Yhann is set to dominate once again. Having trained amongst the world’s best – including New Zealand’s Joelle King and Egyptian brothers Mohamed and Marwan ElShorbagy – at the Elite Squash Academy in Bristol, United Kingdom in recent months, Au Yeong will be eager to showcase her development. Her first opponent, though, may well be jet lag, as she arrives in Singapore just one day before the event begins.

“I’m pretty excited to compete – especially since I get to fly back home again. It’s always nice to compete back home. My main goal going into Nationals is to play my best squash – and if that’s good enough I believe the results will show!” she said.

Gracia Chua could be Au Yeong’s biggest obstacle and the pair are seeded to meet in the final once again. Chua, who has been Singapore’s top junior for some time, will be looking to go all the way this year. The youngster showed great resilience in patches in the final last year and was very close to taking a game off Au Yeong.

A debutant in the main women’s event, Vicky Lai comes in as the joint-third seed, alongside the younger Au Yeong, Wai Lynn.

Due to current COVID-19 restrictions, The MARIGOLD National Squash Championships 2021 will be a no-spectator event.

Fans who want to follow the event can tune in live on the Singapore Squash Facebook page, where matches from the quarter-finals will be streamed. Match results will also be updated regularly on the Association’s social media.

The finals of the event will be played on Saturday, 13 November 2021 from 6:30 pm (local time: GMT +8) onwards. Members of media who require media access, press releases or photos, please contact Alex Wan at alex@sgsquash.com.

More information about the tournament. 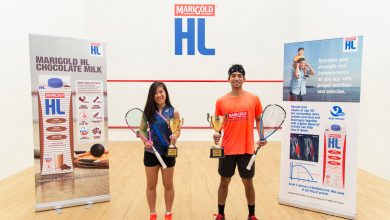