Less than 24 hours after ensuring his new status as the world squash number one, Nick Matthew clinched the $150,000 Sky Open title after beating defending champion Karim Darwish in the final of the third PSA Super Series 2010 event on an all-glass court at the Sky Resort in the Egyptian capital Cairo.

It was Matthew’s four-game semi-final victory over Frenchman Thierry Lincou that ensured that the Englishman will top the PSA world rankings next month for the first time – after reigning world number one Ramy Ashour was defeated in straight games by fellow Egyptian Darwish in the other semi.

And Matthew and Darwish, seeded two and four respectively in the climax of the biggest PSA Super Series event of the year to date, went into the match evenly poised at three wins apiece in their career head-to-head Tour record.

Cairo-based Darwish celebrated his third successive appearance in the final by taking the opening game – but Yorkshireman Matthew battled back to take control before winning 6-11, 11-7, 12-10, 13-11 in 60 minutes to claim the 14th Tour title of his career – and his second successive Super Series trophy of 2010.

“It’s a surreal feeling – it will probably sink in when I get home and in the company of my family, friends and my team,” said the new champion after the presentations.

“I was inspired tonight by what Karim did in Saudi and that drove me to play as though my life was on it. Now I am looking for a break away from the game – a trip to Mexico and then home to work on staying in this position.

“World number one sounds great!” added the 29-year-old from Sheffield.

Matthew also extends his lead at the top of the PSA Super Series Rankings, with 240 points – ahead of Ramy Ashour (170), fellow Englishman James Willstrop (165), and Karim Darwish (120)

Matthew On Top Of The World After Ramy Rout

A stunning straight games defeat of top seed Ramy Ashour by fellow Egyptian Karim Darwish, followed by a four-game win by Nick Matthew over Frenchman Thierry Lincou in the $150,000 Sky Open, will take Englishman Matthew to the top of the PSA world squash rankings for the first time next month.

It was a dramatic evening of world-class action in the semi-finals of the third, and biggest so far this year, PSA Super Series 2010 event, on an all-glass court at the Sky Resort in the Egyptian capital Cairo.

Darwish, the 28-year-old fourth seed, went into the match with Egyptian team-mate Ashour, the world number one since January, 4/7 down in their career head-to-head record – and only last month lost to the 22-year-old in the Egyptian national championship final.

But Darwish, the defending champion who had already beaten two former world number ones en-route to the last four, was determined to make the Sky Open final in his home city for the third year in a row – and despatched his rival 11-8, 11-5, 11-7 in just 33 minutes to claim his 30th appearance in a PSA Tour final.

Incredibly, the result was Ashour’s quickest defeat in a PSA World Tour ranking event since May 2006!

The Ramy rout set up one of the most crucial matches of his life for Nick Matthew, the second seed and world number two behind Ashour since the beginning of the year.

Such was the narrow margin of Ashour’s lead in the PSA list that pre-event calculations showed that all that Yorkshireman Matthew had to do was finish ahead of his rival in Cairo to take over the top spot.

Matthew also faced a former world number one in his bid: veteran Frenchman Thierry Lincou, the 34-year-old seventh seed celebrating his first appearance in a Super Series semi since November 2008.

The 29-year-old from Sheffield dropped his first game of the tournament in this all-important clash – but fought back to beat Lincou 11-8, 7-11, 11-9, 11-5 in exactly one hour to achieve his life-long dream.

“It’s a strange feeling right now as I’ve only won a semi final so it feels like I’ve not finished the job yet,” said a jubilant Matthew afterwards. “But obviously I’m delighted, more so for the people at home; my parents, family, friends, manager, coach, trainer, physio, etc. etc.

“I’ve been a professional since 1998 and I’ve been working towards this every single day of my life since then, and couldn’t have done it without their help.

“I go on holiday to Mexico next week and it’s going to be a fantastic holiday now!!!”

Matthew is also celebrating his 34th appearance in a PSA Tour final – and, win or lose in the final, the Englishman will continue to head the 2010 PSA Super Series rankings.

Veteran Frenchman Thierry Lincou claimed his first semi-final berth in a PSA Super Series ranking event since November 2008 when he beat Wael El Hindi in the quarter-finals of the $150,000 Sky Open – the third, and biggest so far this year, PSA Super Series 2010 squash event at the Sky Resort in the Egyptian capital Cairo.

The seventh seed went into the match boasting a 4/1 career head-to-head lead over No12 seed El Hindi – but the Egyptian’s one win was achieved at last year’s Sky Open after a bruising 110-minute second round encounter.

Former world champion Lincou – at 34, the oldest competitor in the tournament – dropped the opening game against his Cairo-born opponent, but battled back to take the next three to earn an impressive 7-11, 11-7, 11-4, 11-4 victory after 54 minutes.

In an all-European semi-final at the bottom of the draw, the Marseille man will take on England’s Nick Matthew, the second seed.

Winner of the previous PSA Super Series event, the North American Open in Virginia in February, world number two Matthew has his sights on the world number one ranking – and knows that a better finish in Cairo than Egyptian rival Ramy Ashour, his opponent in the US final, could achieve this.

The other semi-final will be an all-Egyptian affair – and a repeat of last month’s Egyptian National Championship final – between top seed Ramy Ashour and fourth seed Karim Darwish, both from Cairo.

Ashour, the world number one, beat his quarter-final opponent James Willstrop at the same stage in the event last year – since when the Englishman gained his revenge in the final of the JP Morgan Tournament of Champions in New York to win the first Super Series event of the year.

But Ashour was on top on the all-glass court in front of his home crowd, beating fifth seed Willstrop 11-6, 11-9, 13-11 in 39 minutes – a defeat which sees the Englishman lose his position at the top of the 2010 PSA Super Series Rankings.

Defending champion Darwish’s battle against sixth seed Gregory Gaultier was a repeat of last year’s Sky Open final. And again the Egyptian had the measure of the Frenchman – but this time was able to progress in straight games, winning 11-5, 11-9, 11-4 in 33 minutes. 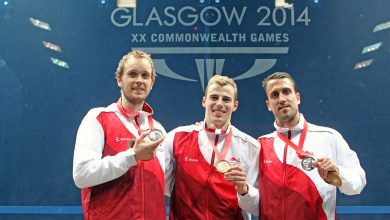