Squash Canada has hosted its first ever Squash 57 webinar, a collaborative effort between Squash Canada and the WSF’s SQUASH 57 Commission.

After the ‘what and why’ of Squash 57 were presented, the audience were stunned to learn the immediate impact that Squash 57 would have across Canada without facility owners investing a single cent on their existing facilities. Canada has only 3 clubs with the 27’ wide Softball Doubles court and only 37 clubs with a North American 45’ long Hardball Doubles court.

Over 95% of the squash courts in Canada are international squash courts which can immediately now offer both the WSF sanctioned discipline of Squash 57 Doubles and Squash 57 Singles, while continuing the growth of international softball. This more than doubles the value proposition of a squash membership and significantly increases overall court usage and participation. Plus, by offering Squash 57, it adds a genuinely enticing reason to return to play.

The reaction to the webinar has been positive. Almost 90% of the attendees believe that that there are real benefits to introducing Squash 57, with 95% of those already starting plan Squash 57 programs and are reaching out on a daily basis to Squash Canada and the WSF SQUASH 57 Commission for assistance in rolling out their new programs!

PanAm2019 Bronze medallist Giselle Delgado said: “I have to admit I was a bit hesitant about Squash 57 at the start, but I can definitely see the potential benefits this would bring.”

President of Squash Nova Scotia, Phil Jourdeuil, recognised the diversity and inclusiveness Squash 57 will add to his province and stated: “It was a great presentation. We will be incorporating Squash 57 into our entry level programming and promoting to clubs. Our board have committed to getting Squash 57 kits before the fall.”

Club Manager Chris Grolla stated: “I knew nothing about Squash 57 prior to yesterday. We are just in the beginning of a shutdown, so it gives us some time to put our thoughts together about integrating squash57 into our club.”

President of the South American Squash Federation and Squash Colombia, Sergio Becerra, jumped on court the next day trying out this hidden discipline of squash. Now excited about Squash 57’s future in South America, he said: “This it is a new way to see squash, a fresh opportunity for the players who cannot keep up with the pace of the younger players. Playing Squash 57, I can now still play at a really good level.”

2018 US National Women’s 55+ Singles & 2016 Canadian Women’s Doubles Champion, Julie Multamaki, said: “It can be a new opportunity to grow membership, revenues and to fill unused court time. I like the fact that it is fun and relatively easy for people to pick up without any squash background.”

Embracing Squash 57 is going to help grow the sport of squash globally. It will make the world of squash more attractive and fun and will attract a new and more diverse audience. More importantly, it is going to keep those of us who love to play squash on court for many more years to come.

Andrea Santamaria on Life as a Squash Referee

Competitive SQUASH 57 to Return in August 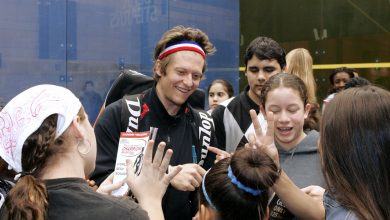