SquashDrive have announced that they have hired Patrick Williams as their new Executive Director, with Williams becoming the first graduate of an urban squash programme to lead a Squash and Education Alliance (SEA) organisation.

Williams brings valuable first-hand knowledge and experience to the programme and community, and SquashDrive Board Chair, Stephen Seelbach, said: “After a thorough and comprehensive nation-wide search, we are delighted to be bringing Pat on board to help lead us into our next phase of growth.”

Williams comes to SquashDrive with over 12 years of squash coaching experience and has worked in youth development and coaching for 15 years. He was born and raised in Boston, and participated in SquashBusters, a sister SEA program, from 6th through 12th grades. He was the top student in his class and is a proud first generation college graduate from Bates College. In addition to being senior class president at Bates, he was a co-captain for the squash team, and a recipient of the NESCAC sportsmanship award. While at Bates, he founded Lewiston Squash, a program for Sudanese and Somali refugees.

Following graduation, Pat remained in Maine, and worked as elementary school teacher, as well as a YWCA after school coordinator. After returning to Boston in 2012, he volunteered at SquashBusters while coaching at The University Club of Boston, among other clubs.  After relocating to LA in 2014, Pat earned his Masters in Coaching & Athletic Administration from Concordia University Irvine and spent four years at the YMCA as the Youth Program Director. He successfully grew multiple youth programs and created new programs such as youth & adult boxing classes and basketball leagues.

“He is the reason why I started this program and why I remain so committed to it 25 years later. Patrick is a person of incredible character and competence. It is a proud milestone moment for all of our programs that he is the first alumnus of urban squash to become a director. We all want to see him become wonderfully successful.”

Williams is thrilled to be stepping into this new role at SquashDrive, saying: “I have a very strong passion for the sport and youth development. I am a believer in what urban squash programs do for underserved communities, as I am a true example of the success urban squash programs have on young lives.”

SEA Executive Director, Tim Wyant, said: “The entire SEA community congratulates Patrick on his appointment. He is a person of integrity with infectious passion for youth development, and we look forward to watching him take SquashDrive to new heights, building on the rock-solid foundation that SquashDrive’s founder Lauren Xaba has so ably laid.

“As the first SEA graduate and second African-American to become the leader of an SEA program, he is a role model to the thousands of students across our network and an example of the virtuous cycle that our member programs continually strive for, to pay it forward and give back to one’s community.” 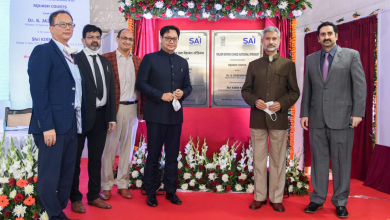 New Squash Courts to Be Constructed At National Stadium Delhi