When you think of squash countries, Guyana is not at the forefront of the mind, but over the next decade, the Caribbean nation could well jump towards the top of the game, and there are several reasons why this could happen.

Firstly, the level of the junior game in the country is thriving. Four players won junior titles at the 2019 Caribbean Area Squash Association (CASA) Games, with Shomari Wiltshire winning the boy’s U17 category having dropped just a single game throughout the competition.

The likes of Michael Alphonso, Abosaide Cadogan and Kirsten Gomes also won their respective categories at the tournament last year, and will be looking at winning their next age category moving forward.

Wiltshire has won every junior title since the U11 category, and has also tasted success outside the Caribbean. The Guyana Squash Association Secretary, Lorraine Ince-Carvalhal, believes that the youngster has a “maturity beyond his years”, and she also stated that the one constant in the junior set-up in Guyana is the National Coach, Carl Ince.

Ince is a Level 4 Elite England Squash Certified coach, and has been in the Guyana set-up for years. He has won several ‘Coach of the Year’ awards, and according to Ince-Carvahal, his contribution is “immeasurable”.

“The longevity of his continuing success is a testament to his own ability to develop, adapt and endure,” said the Association’s Secretary.

“Guyana has been fortunate to be sharing such a unique, wonderful man’s journey; a man who has not only been the driving force behind historic success within the field but also a mentor to the players who have passed through his tuition as juniors and remain his friends into adulthood.” 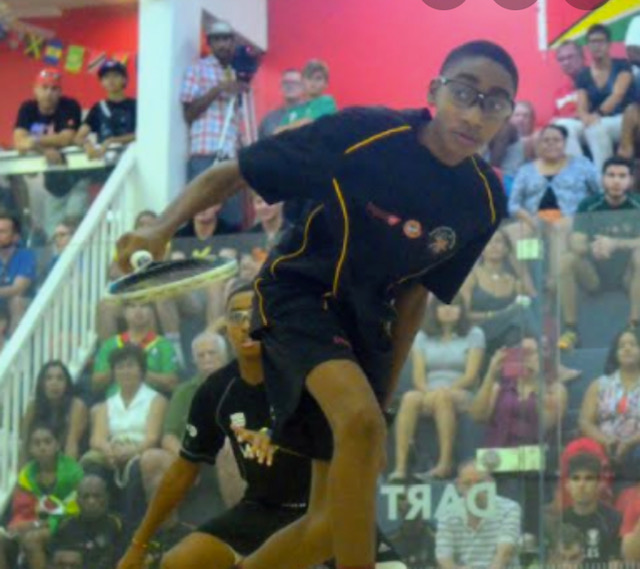 In addition to their junior side, the nation’s senior team is also very strong, with both the men’s and women’s side taking clean sweeps at the CASA 2019 event, with several of those players having also represented the country at the 2018 Commonwealth Games on the Gold Coast of Australia.

That level of performance has helped with the growth of squash in the Caribbean nation, with the number of juniors playing the game in Guyana at its highest level before the COVID-19 pandemic put a stop to play in early 2020.

“We have experienced a lull in our female junior competitors of late, where gaps in age categories have appeared but the high volume of younger players coming up should hopefully fill those gaps in the near future,” Ince-Carvalhal said.

“While we have been able to maintain a strong position within the Caribbean, we aim to increase our growth and standing on an international stage. Our challenge remains facility access for wider participation but it is something at the forefront of our minds and something we hope to address in the future.”

The growth in the country can, in part, be put down to the success of former World No.19 Nicolette Fernandes, who put Guyana on the map during her career on the PSA World Tour, after dominating the Caribbean during her junior years.

“She has been a role model, not only to our squash players but to a myriad of sport in Guyana. Nicolette shone a light on what was possible for athletes with ability and dedication from our little-known country and she did it with such a humble and modest attitude that it gained her the WSA (Women’s Squash Association prior to joining the PSA) Sportsmanship award,” Ince-Carvalhal explained.

“The fact that she was recognised for ‘fairness, respect and ethics on and off the court’ gives us a great sense of pride beyond her outstanding sporting capabilities.

“Since her retirement from professional squash she headed the winning senior CASA team, supported her fellow team mates in their bid to qualify for the Pan Am Games in 2019, and has offered her motivational influence to other team sports, including cricket.”

Thanks to Fernandes’ career, the game has grown in Guyana, a nation which hosts less than 800,000 people.

That growth has led to a new squash complex being built in the country, following in-depth talks with the Ministry of Sport. The new complex with have five courts, with two of the being doubles courts, with the site also hosting tennis and fitness training facilities.

However, like most countries around the world, COVID-19 has had a big impact on squash in Guyana. Unlike parts of the world, though, clubs in the Caribbean nation are still shut, and have been for the best part of nine months.

“Our calendar highlight of Junior and Senior CASA were cancelled and our hopes to send what we believed was one of our strongest boys team in history of Shomari Wiltshire, Samuel Ince-Carvalhal, Michael Alphonso and Nicholas Verwey to the 2020 Junior Pan Am Games, were dashed,” the Guyanese

“This year, we were also planning to send a larger group of players to the Canadian and US Junior open. Following Shomari’s outstanding performances at the Canadian Open last year which led him to a near miss of the Under 17 title, we were planning to ensure more international exposure for our juniors to allow them to develop to their full potential.”

Despite the ongoing problems with the pandemic, Ince-Carvalhal is convinced that squash will come back stronger than ever when it is allowed to do so.

“Squash, along with other sports, have been hugely impacted by the pandemic and the nature of the game of squash means we have been unable to return to business as usual as some of the other outdoor sports have begun doing. We do have a phased return to training plan but are waiting on a safe environment to begin phase 1,” she said.

“Guyana Squash has been around for decades and we will get back on the court and make up lost ground as soon as it is safe for our athletes to do so!”