A men’s final missing both of the top two seeds for the first time in 13 years will bring the 2017 WSF World Junior Squash Championships to a climax in New Zealand after Egypt’s Marwan Tarek and Frenchman Victor Crouin – both 3/4 seeds – produced stunning semi-final upsets today at the Queen Elizabeth Youth Centre in Tauranga. 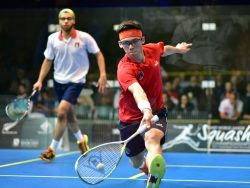 Crouin, the reigning European Junior Champion, was the first to claim a spot in the final after dismissing Mohammad Al Sarraj – denying the No.2 seed the chance to become the event’s first finalist from Jordan.

“I’m happy with my performance, I managed to play the way I have all tournament, with good accuracy and managed to control a lot of the rallies,” said Crouin. “It’s the third time we’ve played and the first time I’ve beaten him, so I’m delighted with that and I still feel fresh for the final.

“It’s good to play in a venue like this in front of such a crowd. I’m going to do my best to win this tournament, it would be a first for France after Greg and Camille finished runners-up and it would be a dream to win this title!” 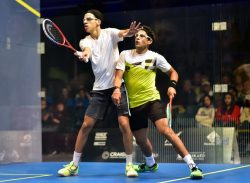 In his first ever international clash with fellow countryman Youssef Ibrahim, Tarek battled for 58 minutes to see off the event favourite 13-11, 11-7, 7-11, 12-10 – Ibrahim unable to convert three game balls in the fourth to set up a decider.

“I’m extremely happy,” said Tarek, 17, from Cairo. “He is like a brother to me, we hang out together, we train together, we belong to the same club, we’ve been in the national team since 2012 together so it was a hard game for both of us.

“Our games are usually close, but inside the court there are no friends so I’m happy to get through.

“I haven’t played Victor since 2011, and I haven’t watched him at all in this tournament.” 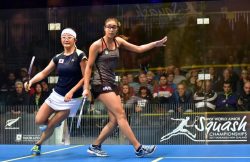 The women’s event produced the seventh successive all-Egyptian final after top seed Hania El Hammamy and Rowan Reda Araby, a 3/4 seed, prevailed in the other semi-finals.

El Hammamy, the 16-year-old world No.35 from Cairo, ended the brave run of Satomi Watanabe, the 5/8 seed who yesterday became the first Japanese player to reach the semi-finals. Watanabe forced tie-breaks in two of the games, but El Hammamy’s experience proved decisive as the Egyptian secured her anticipated place in the final with a 12-10, 11-4, 12-10 win in 34 minutes.

“It was three-nil, but it was a tough three-nil,” said El Hammamy. “I was glad to take the first, the second went quickly, and I was feeling comfortable in the third, going 10-7 up.

“But she came back well, played some good shots so I was happy to win in three.

“It’s going to be an all-Egyptian final, which will be tough. It’s harder playing an Egyptian, there’s no coaching when we play so you have to do it all yourself, and I’ll be playing a friend who usually supports me but will be against me!

“But I’m so pleased to make the final for the first time – I hope I can play well tomorrow.” 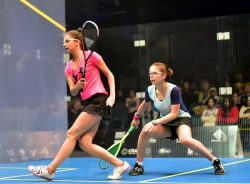 “I’m so excited to make the final again,” said the Alexandrian. “I just wanted to go out to enjoy my squash today, stay calm, and that helped me to play the squash I can play.

“I’m amazed how I played; I wasn’t expecting this, our games are always so tough against and it’s hard to play against another Egyptian. We are teammates and friends and now we have to be competitors.

“It’s difficult, but I’ve said all week I want to go one better than last year, so I just want to enjoy it and play my best.” 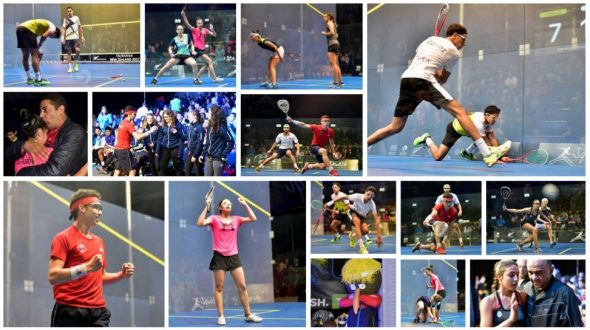