England greats Laura Massaro and Nick Matthew will go head-to-head in the world’s biggest team squash contest, set to launch on World Squash Day (October 10), as players from around the globe are invited to pick sides and do battle.

The England Squash initiative, supported by SquashLevels, has been created to re-engage all players, whatever their age or ability, to join in on some competitive action and support their club during the COVID-19 pandemic.

Whether playing full court as part of a squash bubble or playing sides, players will be able to record match scores on the SquashLevels website where they can choose to be part of Team Laura or Team Nick. The team with the most victories at the end of the month-long contest wins.

England Squash are encouraging all clubs and venues to use the contest as an opportunity to re-engage those players who haven’t stepped back on court. With prizes for the most active club/venue and county, England Squash will provide resources and downloads to support club activity.

Former World No.1 Laura Massaro said: “I’m really excited to be leading this contest alongside Nick to inspire people back on court. I can’t wait to dust off my racket and take on my husband Danny as part of the competition. Join my team and let’s bring down Nick! Enjoy the squash and stay safe.”

Three-time World Champion Nick Matthew said: “Competitive squash has obviously been lacking in recent months and it’s great to see this initiative from England Squash to rally people back on court. The beauty of it is that no matter what your age, gender or ability, you can play within your squash bubble and contribute to the overall score.

“Laura and I are two of the most competitive people you will ever meet and both of us will want to win. Starting on World Squash Day, get on court and record your match. Your score counts!”

England Squash Chief Executive, Keir Worth, said: “We are thrilled to team up with SquashLevels to launch this exciting contest led by our two ambassadors, Laura and Nick.

“Over the last six months, our team have been busy working behind the scenes to guide clubs and venues safely in the return to play. This contest is a fantastic opportunity for clubs and venues to re-engage players who are looking to get back on court for some competitive fun.”

SquashLevels Founder, Richard Bickers, said: “We’re very excited to be part of this wonderful initiative to get players back playing. The squash community has had a particularly difficult 2020 and we’re looking forward to seeing players return to court and supporting their clubs.

“We’ve worked hard to improve SquashLevels over the summer period and we’re excited to share these developments with everyone next week as part of this campaign.”

In 2012, World Squash Day attracted more than 40,000 players who took part in a special global match between Team Squash and Team 2020 to support the Olympic Bid. 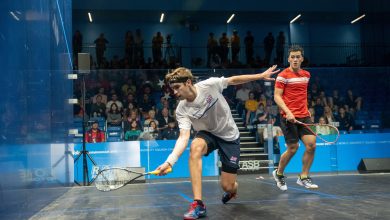