After failing to qualify for the previous two PSA Super Series events, Egypt’s former world No13 Mohammed Abbas made it third time lucky when he despatched higher-ranked compatriot Omar Abdel Aziz in the qualifying finals of the $147,500 Cathay Pacific Sun Hung Kai Financial Hong Kong Open to earn a place in the main draw of the fifth PSA Super Series championship of the year in Hong Kong.

The experienced Abbas, currently ranked 54 in the world, will now face a second fellow countryman Ramy Ashour, the second seed, in the first round. 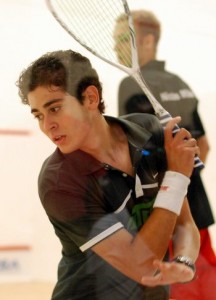 Karim Abdel Gawad pulled off a further unexpected qualifying finals win to boost the Egyptian main draw quota to nine! The 19-year-old from Cairo, ranked 63 in the world, battled for 86 minutes to overcome rising Swiss star Nicolas Mueller, the world No37 who was celebrating his 21st birthday, 11-9, 5-11, 12-10, 5-11, 11-9.

“He beat me twice before, with bad scorelines for me – so I’ve been hoping to play him again for a while now, so that I could see how I’ve improved,” Gawad told www.squashsite.co.uk afterwards. “He’s very tough, very talented, so I’m very happy to see I’ve improved and get through to the main draw.”

Now the youngest player in the first round, Gawad will mark only his second appearance in a Super Series event this year when he takes on fellow countryman Wael El Hindi, the 11th seed.

Australian Aaron Frankcomb denied the hosts a qualifier in the main draw when he beat Max Lee. But the 22-year-old, looking for his first appearance in the main draw of his country’s most prestigious squash tournament for three years, took Frankcomb the full distance, keeping him on court for 93 minutes before the 25-year-old Tasmanian recorded his 11-4, 5-11, 11-8, 6-11, 11-8 victory.

“I lost to him in the first round here last year, so it’s pleasing to get that win under my belt,” said Frankcomb. “The crowd were pretty fair, more on his side obviously, but clapping both of us when we played good shots.”