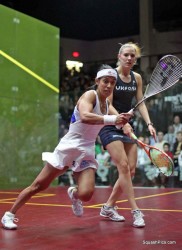 In her longest title triumph since the introduction of PAR (point-a-rally) scoring, favourite Nicol David overcame second seed Laura Massaro in the final of the Women’s Delaware Investments U.S. Open Squash Championship atDrexel University in Philadelphia to become the first player in the event’s history to retain the title.

It was an appropriate climax to the Women’s Squash Association World Series Platinum event, which – for the first time ever – was providing equal prize money to the men’s event.

For five games the pair traded blows, testing each other out with long, patient, well-crafted rallies – with unforced errors few and far between.

Barely a point separated the finalists in the first two games: Massaro reached game ball first in the opener, but David took it 13-11. From nine-all in the second, it was the Malaysian who had the first chance to get the game – but Massaro drew level after a second tie-break game.

Massaro held onto a slender lead through the third to take the lead 11-7, but was unable to capitalise on a 7-4 lead in the fourth as David took five points in a row to force the decider. 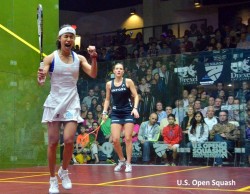 From two-all in the fifth, David moved ahead to 7-3 after some rare errors from her opponent. A winning boast for 10-5, then a ball driven into the deep that Massaro was unable to retrieve saw David leap into the air in delight.

“It feels fantastic, it means a lot to win that match and to win another US Open title,” said David. 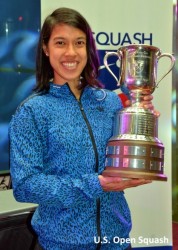 “It’s been such a journey this year; I knew Laura was playing well and I would have to dig deep. When I was down in the fourth, she maybe stepped off it a little, I just knew I had to keep going and going to the last point.”

David held an 18-5 career head-to-head lead over Massaro going into the final – but had lost their two most recent encounters. The victory marks the 30-year-old from Penang’s third WSA Tour title in a row, and the 69th of her career.

“Liz helped me such a lot, she gave me the confidence to go in there, to know I could do it, and she and the team in Amsterdam have been doing that for the last ten and a half years,” added David, in praise of her coach Liz Irving.

“This is such a fantastic event – all credit to US Squash, the sponsors and the venue. Making the prize money equal is putting the women’s game where it deserves to be and we all look forward to coming back for the next ten years!”

Gaultier Reigns Supreme At US Open 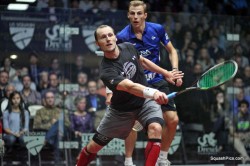 After the longest gap between title wins in the history of the event, 2006 champion Gregory Gaultier clinched the 2013Delaware Investments U.S. Open Squash Championships title after beating former champion Nick Matthew in straight games in the final of the fifth PSA World Series event of the year at Drexel University in Philadelphia.

It was a supreme performance by the top-seeded Frenchman who was celebrating his fourth successive appearance in aPSA World Tour event final since May – and carved his way through the world-class field without dropping a game. 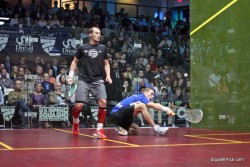 World No2 Gaultier took early leads in all three games – 6-1, 4-1 and 5-2 – and only in the second did third seed Matthew, the world No4 from England, threaten to close the gap.

The climax between two of the sport’s former world number ones took 51 minutes to complete – the second game alone lasting more than 20 minutes – with Gaultier concluding his masterclass in an 11-4, 11-5, 11-5 scoreline.

“It’s amazing,” said the delighted 30-year-old from Aix-en-Provence. “The last time I won this was 2006 so to win it again here in this great venue is like a dream. 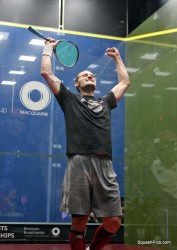 “I gave 500% today, I tried to play fast and use a lot of variation as he’s so strong in the middle of the court,” explained Gaultier – after notching up the 25th PSA World Tour title of his career.

“For me it’s my fifth tournament in a row, Nick has only just started after five months off, so I have the matches in my legs – maybe that was the difference tonight. 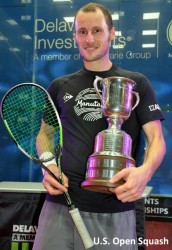 “I’m sure he’ll come back strong, maybe we can have another match in the World Open final next week!

“The sponsors, the organisation and the venue here are all fantastic, and they’re doing great things in helping to raise the women’s game too.”

Matthew, the 33-year-old from Sheffield who 24 hours earlier extended his seven-year winning run over fellow countrymanJames Willstrop to 16 matches, summed up his feeling about the final later on Twitter.

“Sometimes you have to hold your hands up and say that despite giving it everything you were beaten by the better player,” tweeted the 2007 champion. 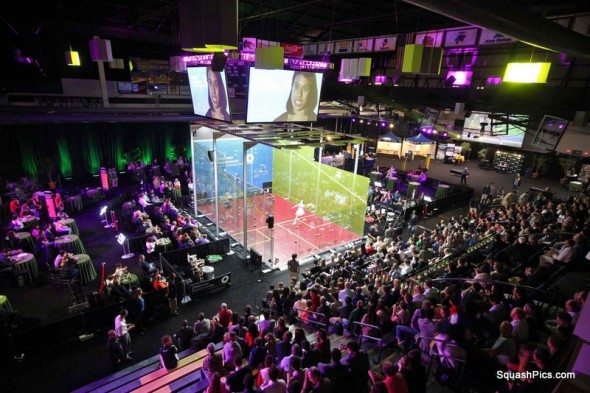