Both top seeds fell in today’s (Saturday) semi-finals of the Grays Women’s Australian Open as fourth seed Madeline Perry and third seed Alison Waters set up an all-British final of the $56,000 WISPA World Tour squash event – the sixth WISPA Gold championship of the year – in Canberra.

Englishwoman Alison Waters survived a magnificent fight back from second-seeded Australian Rachael Grinham to make the 13th Tour final of her career.

The 26-year-old from London will play Northern Ireland’s Madeline Perry in Sunday’s final after Perry stunned top seedJenny Duncalf in four games on a day of upsets. 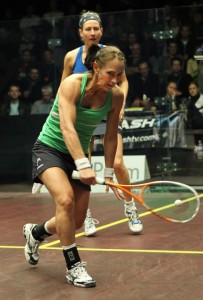 Waters and Grinham went into the semi-final with their career head to head reading six wins apiece, however Waters has had the recent edge over the Australian, including beating her at the same stage of last week’s Singapore Masters.

The world No4 looked heading for a straightforward win when she took the first two games and eased ahead in the third, only for Grinham – ranked one place higher – to dig deep and begin producing her array of unconventional attacking shots.

Former world number one Grinham won the next two then got an early lead in the fifth before a couple of errors swung the momentum back to Waters.

“Obviously going two-love up, I thought I was playing quite well,” Waters said. “Then my length dropped a bit and she was moving quite well and started putting these amazing cross-court drop shots in, so I had to hang in there.

“When I was 9-5 down in the fifth I thought ‘I’ve had two really good tournaments leading into this and I don’t want to lose now’.”

Grinham was at a loss to describe what happened at the end of the deciding game after she had fought her way back into the match.

“I really thought it was going to be over in three but I told myself to push hard and make her win every point,” Grinham said.

“I ended up taking the third then she slowed down a bit and I had more time. I got a good start in the fifth and was 9-5 up and then, I don’t know, I started getting a little bit nervous and gave away a couple of points, then I lost my lead.

“I think because I only needed a couple of points to win I started to go short too early. I really don’t know what happened.” 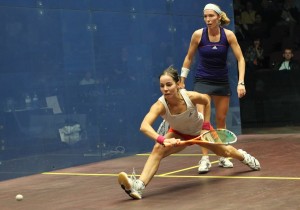 “I had a really good warm-up today for a start so even when I lost the first I didn’t feel too bad, unlike yesterday,” said the Yorkshire-based 33-year-old, now in her 17th Tour final.

“And then I was kind of dying at the start of the second but I started to fight my way back into it and then it turned. I got a couple of nicks in that game and then I thought I can take this today.”

She said she felt good from the moment she walked on court.

“I felt really good movement-wise and I think she didn’t like me moving her around – I was getting mistakes out of her,” Perry said. “I could definitely feel her frustrations start to rise and then I started to get the lucky shots and it didn’t seem to be her day.”