There were no upset results on quarter-finals day of the Australian Open in Canberra, but there were no easy rides for the top seeds either, and a first-ever WSA Gold semi-final place for India …

Australian number one Cameron Pilley survived his second five-game marathon in succession to defeat Egyptian Omar Abdel Aziz to reach the semi-finals of the Hi-Tec Australian Open in Canberra.

Barely 24 hours after being taken the distance by fellow Australian Zac Alexander in the second round of the PSA World Tour International 70 squash event, Pilley was pushed to the limit by the skilful Aziz before winning 11-9, 9-11, 11-7, 4-11, 11-6 to set up a dream semi-final against top seed and defending champion Ramy Ashour. 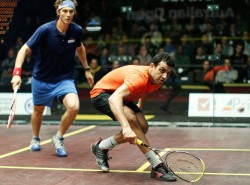 Pilley is one of the tallest players on the tour at 191 cm and he used his incredible reach to great advantage in the first game.

But every time the Australian looked like running away with the match, Aziz fought back to keep the large crowd at Canberra’s Royal Theatre enthralled as the two players battled each other and, at times, the three referees.

It is Pilley’s first major semi-final since he reached the same stage of the Malaysian Open in March last year, and keeps alive his hopes of winning the Australian title after finishing runner-up in 2004, 2007 and 2009.

“I’ve played Omar a couple of times and I knew it was going to be tough,” said the 29-year-old from New South Wales. “I’ve got a few years experience on him and I think that got me through in the fifth. I’m very happy with my concentration in the fifth, like yesterday.

“The other four games were just nip and tuck the whole way so I made a conscious effort in the fifth to put my head down and really concentrate on the start of the game – I was going to die on there before I lost that.” 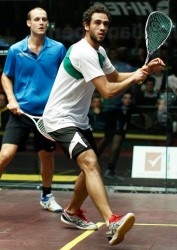 Ashour faced his own battle before emerging victorious over sixth seed Nicolas Mueller. The Swiss number one has given Ashour trouble in the past and he looked on course for a major upset when he led two games to one.

“That was very, very tiring physically and mentally,” Ashour said. “He is a good player and will make a breakthrough at a major tournament before too long. It’s too bad this was a quarter-final, this would have been a good final.” 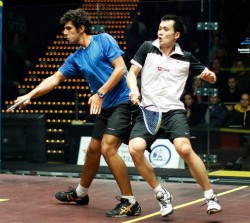 The second semi-final will be between second-seeded Egyptian Omar Mosaad and third-ranked Englishman Tom Richards.

Mosaad hit a stunning array of winners on his way to downing Malaysia’s No6 seed Ong Beng Hee.

After saving a game point in the opening game, Mosaad got his nose in front and stayed there as he punished anything short from the Malaysian veteran, winning 13-11, 11-5, 12-10.

“I was lucky to win three-love.”

Richards was in great touch as he comfortably saw off the challenge from Scottish number one Alan Clyne 11-7, 11-6, 11-4.

Clyne matched it with the third seed until midway through the first game when Richards pulled away and never looked back, showing he is a real contender to reach Sunday’s final.

“When you are playing someone like Alan who has the capability of making it last a long time and playing at a fast pace, you don’t want to be out there for 90 minutes,” a relieved Richards said. 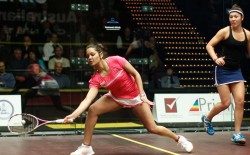 Dipika Pallikal made history after becoming the first Indian player to reach the semi-final of a WSA Gold event at the Hi-Tec Australian Open in Canberra.

Having already seen off the challenge of higher seed Camille Serme in round two, the 20-year-old ended the giant-killing run of Harvard student Amanda Sobhy, who yesterday beat No.2 seed Jenny Duncalf in her own most successful tournament to date.  Pallikal will now face a rested Laura Massaro, who didn’t feature in today’s play as her opponent Donna Urquhart was forced to concede a walkover due to injury.

Australia’s hopes of a home title winner were dealt a final blow as Urquhart’s fellow Aussie Kasey Brown was also eliminated from the event in straight games at the racket of experienced professional and world No.5 Madeline Perry. 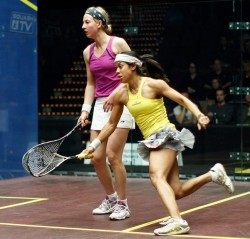 The most highly anticipated game of the day came as the six-time World Champion and world No.1 Nicol David squared up to the rejuvenated Alison Waters for the first time since the Englishwoman returned from a year-long absence with an Achilles injury.

Waters, who has won 4 out of 5 WSA World Tour titles so far this year, got off to a great start against the Malaysian favourite, taking the first game 12-10 on the tie-break.  David hit back with a resounding 11-1 second game and gained the advantage in the third, taking it 11-7.  A marathon fourth game ensued, with Waters displaying exactly why she is still a force to be reckoned with a the very highest level of the game.

Just falling short of pushing a fifth game, the former world No.3 succumbed to defeat at 15-13, but will take comfort from the fact that she pushed David to her longest match in over a year, registering at 68-minutes.  David will progress to play Madeline Perry of Ireland in tomorrow’s semi-final.