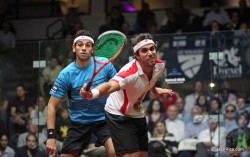 Darwish, the 32-year-old former world number one from Cairo, went into the match 8-2 ahead in the pair’s all-time head-to-head record – but 22-year-old Elshorbagy, from Alexandria, recorded a notable 3/0 win over his senior Egyptian team-mate last December en-route to an impressive PSA World Championship final debut. 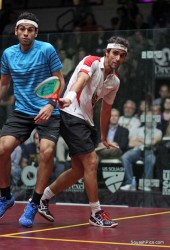 In the second, fifth seed Elshorbagy built up leads of 6-1, then 8-3 and 9-4 before proceeding to self-destruct – with five unforced tins in a row. Darwish took the game 11-9 with a dropshot for an unlikely two-game lead.

Darwish took full advantage in the third, taking a 5-1 lead, then extending it to 7-3. At 10-6 a delicate crosscourt dropshot clinched the match for Darwish – and a first appearance in the US Open semi-finals since 2007.

“I was really focused for this match,” said Darwish after his 11-9, 11-9, 11-6 victory. “I really wanted to win this one and it’s such a great feeling to be in the semi-final of the US Open. There were a few collisions in the second. I wasn’t too happy about it, but I told myself I had to win and I’m happy I could do it.” 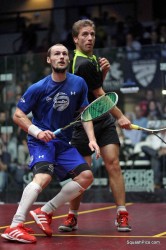 Darwish will now face career-long French rival Gregory Gaultier, the top seed, for a place in the final.

“Greg’s one of the in-form players, so it should be a good match against him on Thursday,” concluded the exuberant Egyptian.

Underdog Castagnet, a surprise quarter-finalist after ousting No7 seed Borja Golan in the previous round, got off to a flyer, building up a 6-0 lead.

The unperturbed event favourite calmly worked his way back into the game to draw level at eight-all before taking the lead 9-8 with another crisp volley. 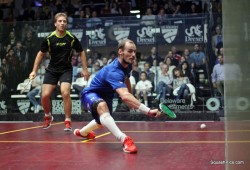 “He started really fast and took me a bit by surprise,” admitted Gaultier. “It was maybe a bit faster than he usually plays, so I knew I had to make the game tough even if I lost it. Once I got a few points I was confident I could win the game, but I had to work hard.

“He didn’t slow down at all in the second, he played just as well as he had in the first, so I had to really dig in to stay in front.

“We’ve played together for so long it’s really hard to play in a match like this, but you just have to forget about that and find a solution to win.” 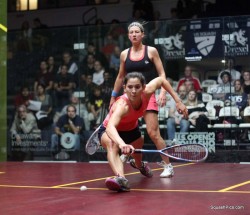 New Zealand’s Joelle King earned herself a surprise second successive semi-final appearance in the Women’s Delaware Investments U.S. Open Championship after pulling off a notable upset over England’s No4 seed Alison Waters in the quarter-finals of the Women’s Squash Association World Series Platinum event which – for the first time ever – is providing equal prize money to the men’s event.

Londoner Waters, ranked four in the world, went into the match 3/1 ahead in previous Tour meetings – with a straight games win over the world No5 from Cambridge in their most recent clash in the KL Open in March.

Waters duly took a 6-2 lead in the opening game – but King worked her way back, taking five points in a row from 5-8 down to reach game ball as a let given to Waters was turned into a no let on video review. 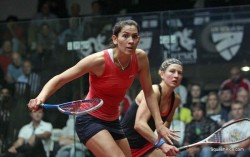 Waters saved those game balls, but a stroke later put the Kiwi ahead.

“Quite often when you sneak a game, like I did the first, you can get on a roll like I did tonight,” said the 25-year-old New Zealand champion.

“Alison probably wasn’t at her best but I’m pleased with how I played and really happy to be in the semi-finals again. It’s been a long break so it’s good to be back plying tournaments again, and this is such a great one to do well in.” 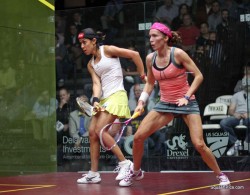 King will face defending champion Nicol David for a place in the final. The world number one from Malaysia defeated Irish rival Madeline Perry 11-6, 11-6, 11-4 in 34 minutes.

“I knew I had to be on from the start,” said David, bidding to become the first player for more than 20 years to successfully defend the title. “Madeline is so strong from the middle and she had me on the run a lot of times so I had to work hard to stay in front.”

Perry, the world No9 from Belfast who went into the match with only one win over David in 22 meetings, was not unhappy with her performance: “I thought I played pretty well there, but it’s pretty warm on there and she was getting everything back.

“I thought I’d won some of the rallies three times over, but when she’s playing like that there’s not a lot you can do!” 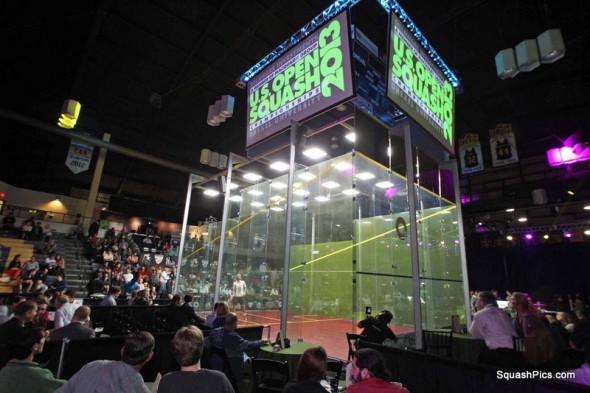