The top four seeds secured straightforward wins in today’s first qualifying round of the SDAT WSF Under-21 World Cup, the inaugural mixed team event launched by the World Squash Federation in the Indian city of Chennai.

Hosts India attracted the biggest crowds to the Indian Squash Academy where the fourth seeds took on Germany, the No8 seeds, in Pool A. After the second-ranked Indian man Ramit Tandon earned a hard-fought 11-2, 11-5, 12-10 victory in 45 minutes over the German number one Rudi Rohrmuller, the event’s highest-ranked player Dipika Pallikal cruised to an 11-2, 11-4, 11-7 win over Franziska Hennes in just 20 minutes to ensure victory for the crowd favourites.

Now ranked a career-high 14 in the world, Chennai born and bred Pallikal arrived home just 24 hours before the event started after celebrating her best Tour success in New York where she reached the final of the prestigious Tournament of Champions.

“There is always extra pressure on the first match of a new event, but I was very happy with the way it went – especially as I only got back from New York yesterday,” said the 20-year-old Indian champion who accredited her recent form to new coach Sarah Fitz-Gerald, the five-time world champion from Australia with whom she has been working for more than a year.

“I’m really enjoying playing in this event here at the venue that I grew up at – and it’s a close-knit team – we’re all really good friends,” continued Pallikal, whose hometown performance was supported by various members of her family including her father and grandmother.

“Ramit gave us a great start – I was delighted with the way he played,” said national coach Cyrus Poncha later. “He did extremely well to beat Rudi 3/0. Then we sailed through.” 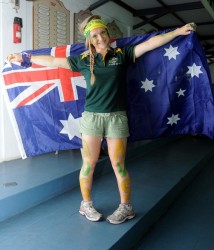 “The first match is never easy and I made a bit of a slow start,” admitted 18-year-old El Shorbagy, who now boasts a new career-high world No33 ranking. “It’s a great tournament – I really like the format – and I always like to represent my country.”

El Shorbagy agreed that an international squash clash between Egypt and Australia is always a special occasion: “Australia have great players – and Rodney Eyles, their manager here, is one of the greatest players ever.” 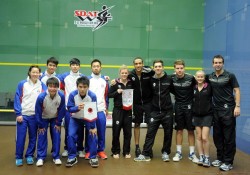 Later in the day, England took on Hong Kong in the first tie on the centre’s all-glass court. Charles Sharpes led the second seeds’ campaign with an 11-1, 11-2, 11-8 win over Cheuk Yan Tang, a Hong Kong left-hander ranked more than 200 places lower.

England’s youngest player Emily Whitlock dropped a game en-route to her 11-2, 11-9, 9-11, 11-7 victory over Karman Siu. “I was surprisingly nervous before the game,” admitted the 17-year-old European Junior (U19) champion.

“Emily’s too much of a perfectionist,” said team manager David Campion after Declan James wrapped things up for England with an 11-6, 11-8, 12-10 defeat of Wong Chi-Him. “She did a good team job for us.”

Campion continued: “They’ve got a strong system in Hong Kong so we knew what to expect. But we went in with a strong team and did what we set out to do, which was to get a good start.”

After his win, Sharpes said: “It’s good to get the first one out of way – I was a bit nervous about playing my first game, but I think I played well.”

James added: “It means a lot to me – getting to play in an England shirt is always an honour. It’s a fantastic and very well organised event.”

In the final tie of the day, Lucas Serme put third seeds France ahead against Malaysia after beating the seventh seeds’Affeeq Abedeen Ismail 11-5, 11-9, 11-9.

“We knew their girl would be good – but our boys played well,” said French coach Philippe Signoret. “Our players are not used to playing on the all-glass court.”

Was Malaysian team manager Raymond Arnold disappointed with the outcome of the final match? “No – we had hopes from the first match in which Abedeen led 7-2 in the second game and 6-2 in the third! He lost concentration – it was a new experience for him.”