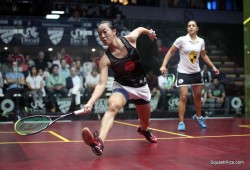 In her first ever victory over the world No3 from Egypt, Low Wee Wern upset 2012 runner-up Raneem El Weleily in the quarter-finals of the Women’s Delaware Investments U.S. Open Championship at Drexel University inPhiladelphia to ensure double Malaysian interest in the semi-finals for the first time in the event’s history.

The sixth seed from Penang, who has never before progressed beyond the first round, will meet second seed Laura Massaro in the semi-finals – joining defending champion and fellow Penangite Nicol David in the penultimate round. 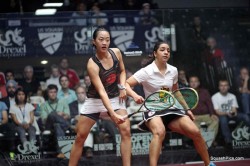 Low came through a five-game thriller to progress to the last four of the Women’s Squash Association World Series Platinum event which – for the first time ever – is providing equal prize money to the men’s event.

The 24-year-old from Cairo looked on course for a second successive place in the semis as she led 7-4 in the fourth – but Low hung in to level at eight-all before two strokes took the match into a decider.

El Weleily’s error count suddenly increased dramatically as five tins gave the Malaysian underdog a 6-1 advantage. The Egyptian worked her way back, however, and edged ahead at 8-7.

But a successful appeal against a let turned into a stroke to give Low a 9-8 lead – then two more errors took the Malaysian into the semis.

“I feel like going back on for another game, the rallies were so hard it doesn’t feel like it’s all over,” said the jubilant winner. “It’s definitely one of my best wins, but there was no pressure on me going into the match, so I just had to stick in and that seemed to work in my favour today.” 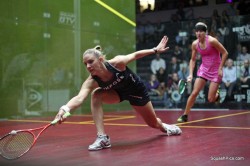 World No2 Laura Massaro was up against surprise opponent Kasey Brown, and was eager to get revenge for the ninth-seeded Australian’s upset over her England team-mate Jenny Duncalf in the previous round.

Brown started strongly, building up leads 5-2 and 7-3. But Massaro fought back to level at eight-all and moved on to game-ball. 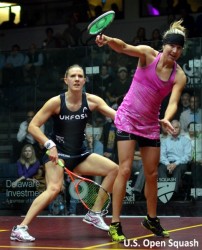 But the England number one from Preston lost out on a video review and Brown seized the chance to take the opening game.

Massaro came out strongly in the second – and ultimately controlled the next three games.

“We hadn’t played for a couple of years, so I had to get used to how Kasey plays, and she’s playing well at the moment,” said Massaro, the 2011 champion.

“She’s very strong down the middle so I had to adjust my game to counter that and I’m happy with how I played the last three games.” 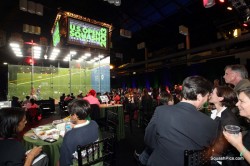 One of the most celebrated rivalries in world squash will be re-enacted in Philadelphia where Englishmen James Willstrop and Nick Matthew will compete for a place in the final of the Delaware Investments U.S. Open Squash Championships, the fifth PSA World Series event of the year at Drexel University.

The two PSA stalwarts and England team-mates, who live within 60 miles of each other in the English county of Yorkshire, will be marking their 31st Tour meeting since June 2001 – but their first for more than a year.

And Willstrop, the world No3 from Harrogate, will be looking for his first win over Matthew since beating the world No4 in his home city of Sheffield in December 2007. 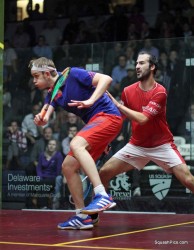 Second seed Willstrop was in sparkling form against Simon Rosner – the world No12 from Germany against whom he boasted a 4/0 career head-to-head Tour record.

Willstrop went up 6-1 then 8-2 in the first, before taking it 11-5. From 4-2 in the second, the 30-year-old Englishman eased away again, taking seven points in a row for 11-2. The trend continued up to 6-2 in the third as the finishing post looked in sight.

But Rosner fought back to six-all, forcing the first errors from Willstrop’s racket and celebrating some long-awaited winners.

Much to the delight of the packed crowd, the unseeded 25-year-old from Paderborn took the game – his first against Willstrop in five matches!

But Willstrop restored order in the fourth to move 6-2 ahead. Rosner dug deep to get back to 6-9, then to nine-all as the crowd sensed an unlikely decider. 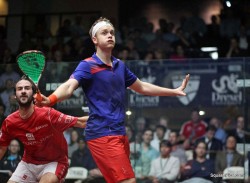 “It’s not easy to put three games of that quality together in a row,” admitted Willstrop. “If you can, it would be pretty magical, but I was pleased to be able to do it for the first two games.

“It’s tough, especially when you get blamed all the time,” said Willstrop, in reference to the several warnings he’d received from the central referee about clearing his shots better. “We’re both big guys and I certainly don’t think I was entirely to blame. I see it happening in other matches without them being warned, but maybe it is me, maybe I need to find a way to solve it.

“Anyway, I’m happy I managed to find a way to close out the win and it should be a good all-English match tomorrow, whoever I play.” 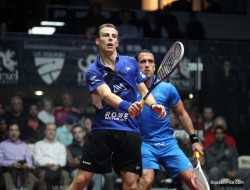 Third seed Matthew faced London left-hander Peter Barker, the sixth seed against whom he boasted a pre-match 20/2 record. But Matthew’s second loss was in the pair’s most recent encounter, at the Canary Wharf Classic in March in Barker’s home city.

Matthew was in charge in the first two games, controlling the rallies with precise volleys, punching the ball deep into the corners.

Barker was more aggressive from the start of the third, however, firing in a couple of spectacular volley kills as he opened up a 5-1 lead. Matthew reduced the gap to 3-5 and 6-7, but the determined world No7 stayed ahead until Matthew levelled at eight-all. 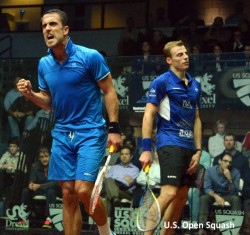 Barker then saved two match-balls before converting his second game-ball to take the match into a fourth game. 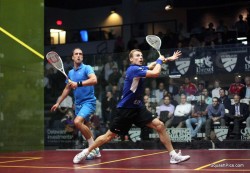 “I saw how the last match went, with James cruising at 6-2 in the third,” said Matthew. “So I was on my guard against that happening to me but he played really well at the start of the third and suddenly I was 5-1 down and he was becoming confident.

“It got a bit scrappy and bitty after that, a lot of lets and bumps, but I just had to tough it out and I’m pleased how I was able to do that.”