The Big Hit ‘pop up’ squash shop campaign is aimed at introducing people to the sport whilst successfully transforming empty retail spaces into a temporary high street squash court. Following a trial, interested players are then offered vouchers for free sessions at nearby clubs and leisure centres.

The initiative looks to promote squash to new markets, predominately in the 18-35 age-group.

“We were inundated from shopping centres across the country after our first ‘pop up’ squash shop was shown on BBC TV,” said England Squash & Racketball CEO Nick Rider. “The coverage led to the opportunity to have a month-long shop at Westfield Stratford, Europe’s largest shopping centre next to the Olympic stadium in London.” (see pictures below) 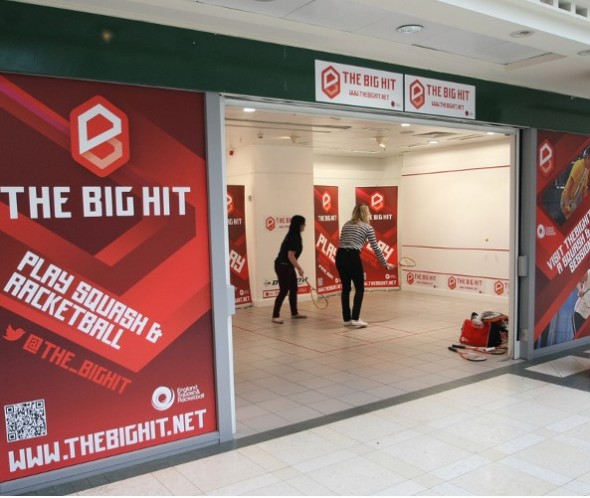 Steve Amos, the ESR Head of Development who devised the novel promotion to take squash to the public, explained: “This is the perfect way to utilise empty retail space around the country. We are able to reach out to the public in a completely different way and give them the opportunity to try squash.

“Not only are we raising the profile of our sport but also introducing people to their nearest courts and Big Hit sessions. ‘Pop Up’ squash is part of the wider Big Hit campaign that works with public facilities and clubs to help increase participation.

“‘Pop Up’ squash is a concept that could easily be replicated across the world and is an initiative that England Squash & Racketball are extremely proud of and would encourage other federations to try.” 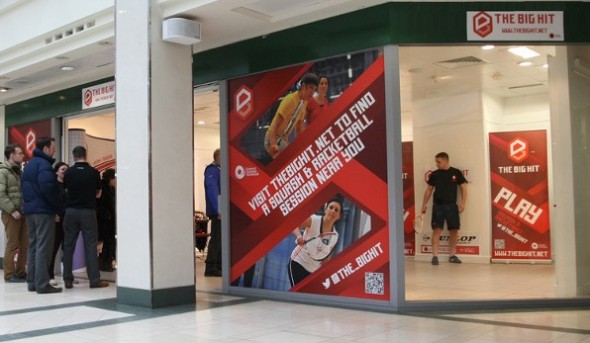 England’s world No2 Laura Massaro is delighted that the concept is attracting more players to the sport: “I think it’s a great idea. Squash is the perfect sport to put in the ‘shop window’ and because we play on courts not much bigger than a shop, the experience for shoppers to pick up a racket and have a go, gives them a real feel for how much fun the game can be.

“Making good use of unused retail space to get people playing squash is another example of how squash is willing to innovate and attract new people to this fun and exciting sport. I can’t wait to try out the courts for myself!”

World Squash Federation CEO Andrew Shelley added: “England have hit upon a new and innovative way to get people into squash, which hopefully will further increase participation in the sport as well as inspire people to lead a healthy and active lifestyle.

“With less than two weeks to go until the IOC vote, this is yet another example of how the squash community is looking to innovate and engage new participants as well as hopefully create a new generation of squash stars.”

More details are available on the Big Hit website: www.thebighit.net