Emily Whitlock, a 17-year-old from England in her maiden appearance in the WSF Women’s World Junior Individual Squash Championship, stormed into the semi-finals of the World Squash Federation championship in Boston, USA, after upsetting home hope Olivia Blatchford at Harvard University.

After surviving a tough four-game last 16 round match against New Zealander Megan Craig, 5/8 seed Whitlock defeated 3/4 seed Blatchford, an 18-year-old from New York in her fourth appearance in the championship, 11-8, 11-8, 11-7 in 33 minutes. 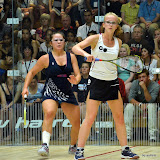 “It didn’t feel like a quarter,” Whitlock told the official website www.worldsquash.org/worldjuniors2011 afterwards. “All I wanted to do was reach my seeded position, and after yesterday my confidence was really down.

“But I played well there. I haven’t even won but I’m so happy,” added the recently-crowned European Junior champion from Colwyn Bay in Wales.

Whitlock will now face Egypt’s Nour El Tayeb, the 18-year-old from Cairo who is seeded to reach the final for the third year in a row – but expected to win the title for the first time.

“I know Salma’s game, so I was less nervous before the start of this match,” said the favourite. “It was never an easy match though, even in the second there were still tough rallies, but I was pleased with how I played and I’m happy to be in the semi-finals.

“I was surprised that Emily beat Olivia – but she’s a good player and I know I’ll have to play well again to counter what she throws at me. I’m looking forward to it.” 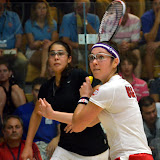 “I’m feeling pretty good, trying to keep the pace high and volleying everything I can, and I’m seeing the ball well on here too – which is usually a problem for me on glass courts,” explained second seed Sobhy.

“The home crowd gives you a boost too, it makes you want to give your best and picks you up if anything goes wrong. All the Egyptians are good – but she’s very young and I knew that if I got on top early and started to dominate I could break her mentally.

“I’m glad it’s my last year though – I wouldn’t want to face her in two years’ time!”

El Sherbini stunned the squash world two years ago when she won the title in India aged just 13 – becoming youngest world champion ever. 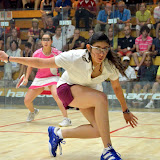 “We know each other’s games well and it’s usually close, so I knew I had to concentrate to do well in this match,” said the 15-year-old from Alexandria. “Winning the first was very important and after I’d done that it gave me confidence to go for more shots in the second and third.

“I thought I played well and I’m happy with my performance today. I’m looking forward to the semi-final and hope I can play well again.”